Boris Johnson has sparked fury by claiming millions of pounds of police funding is being ‘spaffed up the wall’ investigating allegations of historic abuse.

The former Cabinet minister and favourite to succeed Theresa May as Tory leader made the crude reference as he suggested ‘an awful lot of police time’ is being spent looking at ‘historic offences and all this malarkey’.

‘Tell that to those whose lives were devastated by abusers. Tell that Frances Andrade who took her own life 30 yrs after the abuse she lived with every day.’ 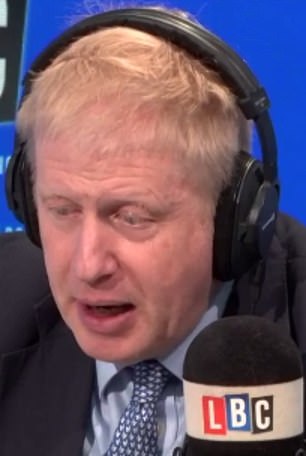 Speaking on LBC this morning, (right) Boris Johnson suggested ‘an awful lot of police time’ is being spent looking at ‘historic offences and all this malarkey’. He is pictured on the left on his bike after leaving the LBC studios 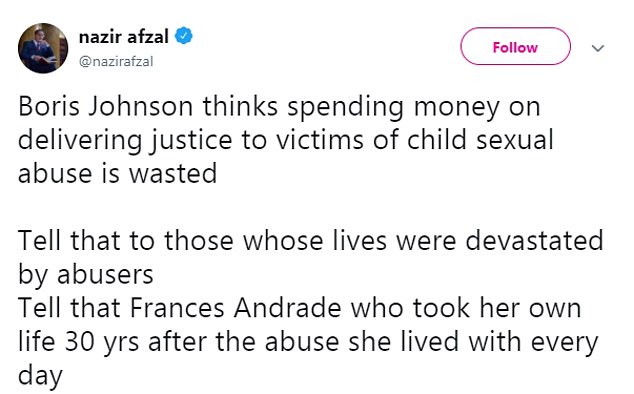 Mr Johnson’s comments prompted a storm of outrage on Twitter, with screenwriter Adil Ray saying they were ‘disrespectful to victims of all abuse’

In an LBC interview, Mr Johnson said people ‘want to see officers on the streets’, and he backed increased use of stop-and-search tactics as a way to tackle knife crime.

After being asked whether police cuts had contributed to the problems on London’s streets, he replied: ‘Keeping numbers high on the streets is certainly important. But the question is where you spend the money and where you deploy the officers.

‘What on earth is that going to do to protect the public now? What the people want is to see officers out on the streets doing what they signed up to do.’

His comments sparked an angry reaction, with one critic describing them as an ‘insult to every survivor of child sex abuse’.

Katie Russell, from Rape Crisis, said: ‘Both the suggestion that investigating these devastating crimes is a waste of resources, and the highly inappropriate use of language, are deeply insensitive and offensive towards the hundreds of thousands of people impacted by sexual violence and abuse living in this country.’

The NSPCC said: ‘Bringing child abuse perpetrators to justice is not a ‘malarkey’ and such crass language is an affront to victims who have suffered in silence for decades.

‘Investigation of historic allegations is an important part of creating a culture where we can talk more openly about abuse.

‘These investigations will also help us all to learn lessons so that as a society we do not repeat the mistakes of the past.’

The charities’ comments were echoed on Twitter, where feminist activist Sophie Walker said: ‘This is horrible. A punch in the stomach to anyone who has experienced abuse.

‘What good to investigate such ‘malarkey?’ Perhaps to show that our society cares about its most vulnerable and really wants to end violence against them.’

And screenwriter Adil Ray said: ‘Johnson thinks people don’t care because he doesn’t care, thinks he’s funny & smart but in fact he’s vulgar and unbelievably out of touch. How disrespectful to victims of all abuse.’ 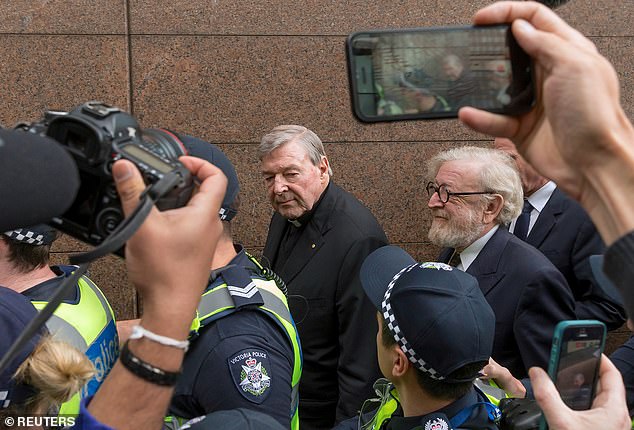 The comments were made hours after Cardinal George Pell was sentenced in Australia to six years in jail for child sex offences. He is seen outside court on July 26, 2017

Several Labour MPs also weighed in with their criticism.

John Mann said: ‘Boris Johnson says investigating child abuse was a waste of money. Try telling that to my constituent whose rapist got 19 years after we pressured for the case to be reopened.’

Ian Lavery MP, the party’s chairman, added: ‘These disgusting comments are an insult to every survivor of child sex abuse.

‘If Boris Johnson has even a little bit of decency he will now apologise to the victims and families of those who have suffered.’

The comments came hours after Cardinal George Pell was sentenced in Australia to six years in jail for child sex offences.

Pell was convicted of sexually assaulting two 13-year-old choirboys in 1996, becoming the most senior Catholic to be convicted of abusing children.

It also comes as the Independent Inquiry into Child Sexual Abuse, which was set up after Jimmy Savile was exposed as a serial paedophile, continues a three-week probe into allegations involving politicians.

Earlier this week, MI5 expressed its ‘deep regret’ that an allegation of possible child sex abuse by a Tory MP in the 1960s was not passed to police.

A member of the security service, giving evidence anonymously, said the report on the late Chester MP Peter Morrison was looked at from a ‘narrow security-related view’.

A 1986 letter from MI5 to the Cabinet Office read to the Westminster strand of the inquiry, which is sitting for its second week, referred to a rumour that Mr Morrison had a ‘penchant for small boys’.