Boris Johnson showed a desire to ‘lead and protect’ his pregnant wife Carrie at the G7 Summit by placing his hand on top in their clasp, while he displayed signs of ‘peacocking’ during Euro semi-finals, a body language expert has claimed.

On Saturday, Carrie Symonds, 33, announced she is expecting her second baby and Boris Johnson’s seventh after suffering from a heartbreaking miscarriage earlier this year.

The couple, who already share son Wilfred, one, have been spotted several times since their Spring wedding on 29 May.

Speaking exclusively to FEMAIL, body language expert Judi James explained how the Prime Minister, who is not known for romantic PDAs, has been acting protective of his wife and ‘peacocking like a proud father-to-be’ in recent weeks.

Boris Johnson has been acting more protective of Carrie Symonds in the weeks leading up to the announcement she was expecting their second child, body language expert Judi James has claimed. Pictured; the Prime Minister and his wife during the G7 Summit in Cornwall on June 11 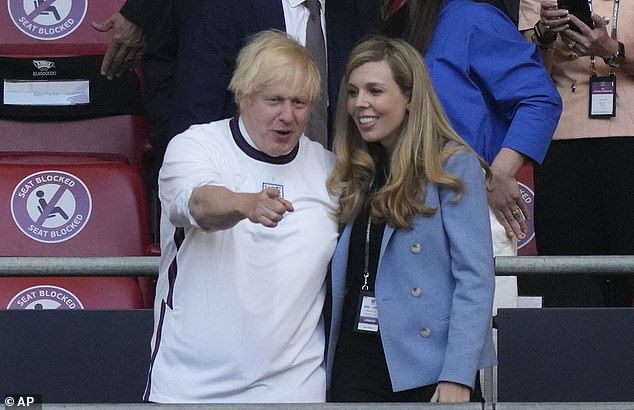 At the Euros semi final on July 7, pictured, Judi said Boris fluctuated between being ‘nestled in’ with Carrie to peacocking

‘Both the G7 and the Euro final were guaranteed to be a huge distraction for the PM, but his attention signals did still seem focused on his wife,’ Judi explained.

‘Their hand-in-hand proximity might not have been remarkable at the G7 because, as the Bidens show here, it is seen as the norm for global leaders and their spouses, but there were still add-on cues or traits that gave the impression Boris was being more protective of Carrie that usual.

According to the expert, at the Euro semi final on July 7, there were some ‘unmistakable bonding signals from the couple.’

She explained: ‘They looked far more intimate and “nestled in” together than usual.’ 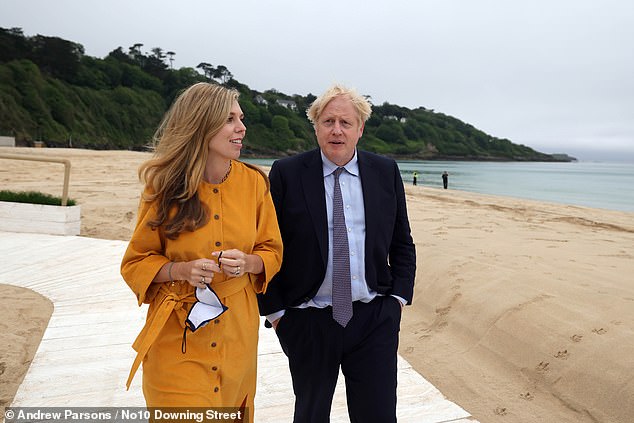 During the G7 summit with other world leaders, proud Boris was signalilng some ‘alpha boasting’ next to Carrie, according to Judi

Judi went on to note how Boris Johnson also showed signs of protective behaviour towards Carrie by ‘leading the way’ during the G7 Summit in Cornwall which took place from June 11th-13th.

‘Walking hand-in-hand there are two extra aspects of this affectionate ritual that hinted at a more protective approach from dad-to-be Boris,’ Judi explained.

‘His hand is firmly on top in the clasp, with the back of the hand facing front in a vertical position, signaling that desire to lead and protect.’

The expert went on to say how Boris multiplied subtle signals of protection towards Carried when they were photographed walking on the beach of Cornwall during the event with other world leaders.

‘Boris also seems to tuck their clasped hands back behind them rather than just letting them swing down in between them,’ she said. ‘This is another protective gesture, suggesting a desire to tuck Carrie away and keep her safe.’ 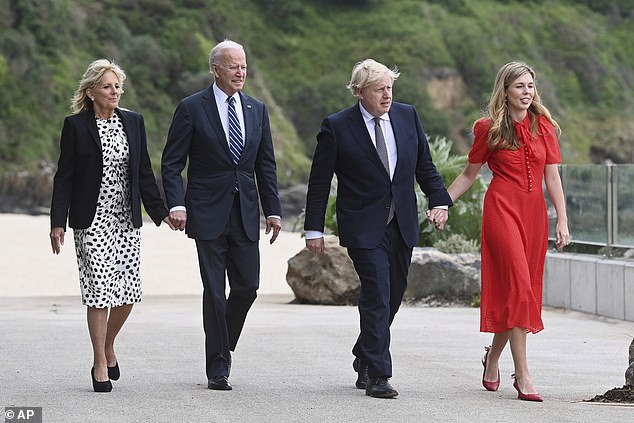 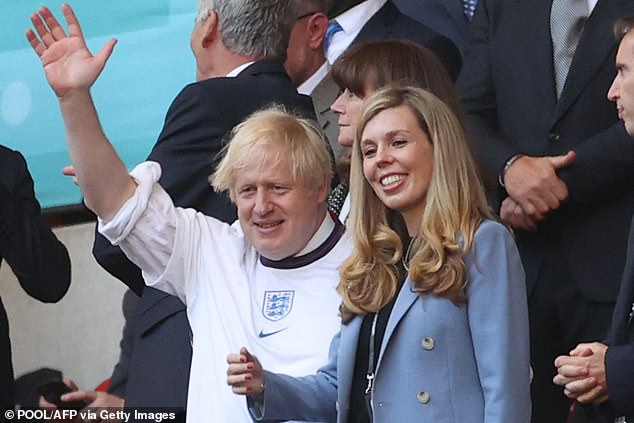 During the Euros, Boris asserted his dominance and protection over Carrie, with his eyes on the pitch but his torso turned towards her, pictured

And even when the couple were just walking side-by-side without hand holding, the Prime Minister’s body language was that of a proud father.

‘When she walks with her hands held in a clasp over her stomach, Boris’s hands get shoved into his trouser pockets. This looks like a subtle display of machismo, with his hands close to his pelvic region while hers protect the as-yet-invisible bump,’ Judi said.

At the Euro semi-final, the Prime Minister, who was dressed in a Three Lions t-shirt, fluctuated between ‘alpha boasting’ and intimate gestures of attention to Carrie, who was standing next to him in the VIP box of Wembley stadium.

‘When he stands together with Carrie there is a look of “nestling” going on, with their torsos both turned slightly inward and a very close proximity between them,’ Judi said.

‘As he is turned in towards Carrie he uses a point gesture as though teaching her all about the game, suggesting feelings of dominance and protection,’ she added.

‘When they part, Boris can be seen “peacocking,” which is a body language version of boasting based on machismo, standing fully splayed with both hands on his hips as he looks out over the pitch,’ she added.