Boris Johnson today slammed peers over a 3.1 per cent pay rise that is set to take their tax-free daily rate to £323.

The Prime Minister said he found the hike, which is being lined up for April, ‘odd’ after he was asked about it in the Commons.

Mr Johnson took the unusual step of wading into the row after MailOnline revealed that Lords are about to increase their per diem allowance from the current level of £313.

The Upper House has decided to link their payments to rises for MPs.

However, critics pointed out that politicians in the Commons have salaries, and an independent regulator has decided to tie their settlement to average weekly earnings in the public sector.

By contrast, peers get expenses and allowances to cover their costs. The payments are tax-free because members of the Upper House are not legally employees or office-holders.

A standard year can see 150 sitting days in the Lords, meaning that peers could now pocket nearly £50,000 without paying any tax or national insurance.

The 3.1 per cent increase will be worth more in cash terms to Lords than MPs, who will be liable for higher rate tax on the extra money. 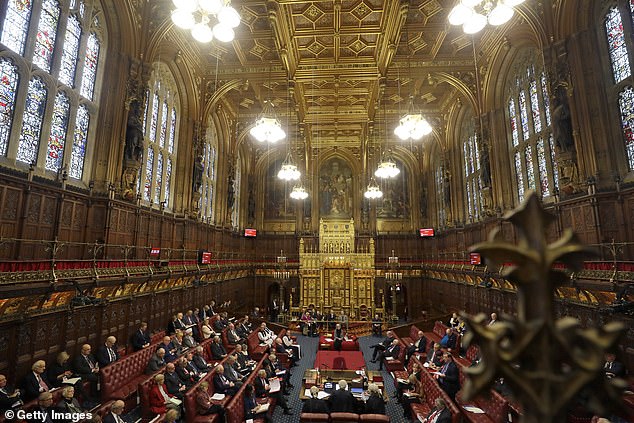 The per diem rise, which is being lined up for April, comes after the Lords (pictured debating the EU Withdrawal Bill last month) decided to link their allowances to MPs’ increases 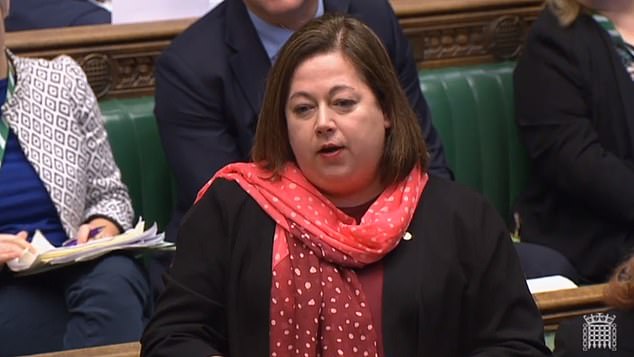 At PMQs today, SNP MP Kirsten Oswald highlighted the rise for the ‘unelected and unaccountable’ peers who were being ‘stuffed’ into the Upper House

At PMQs today, SNP MP Kirsten Oswald highlighted the rise for the ‘unelected and unaccountable’ peers who were being ‘stuffed’ into the Upper House.

She said a single person on universal credit received £317 a month, adding: ‘Is that the levelling up the PM keeps talking about?’

Mr Johnson replied that he ‘hated agreeing’ with the SNP, saying: ‘I do find that it is odd that the House of Lords has chosen to do that. But it is a decision for them.’

The plans to lift the per diem payment from £313 to £323 emerged after auditors warned that the allowances system in the Lords is still ‘vulnerable’ to abuse.

The Lords is also facing an assault from the government, with Mr Johnson threatening to relocate the chamber to York as part of efforts to reconnect politics with the wider country.

MailOnline revealed in December that MPs are set to see their salaries go up by £2,000 to nearly £82,000 from April.

What can members of the Lords claim for?

Peers who are not ministers or officeholders can claim £313 tax-free for every sitting day they attend the House of Lords.

They must certify that ‘parliamentary work’ was carried out – but there is no definition of what constitutes work.

Peers who have their main residential address outside Greater London can also claim travel expenses for themselves and their spouse or civil partner to attend the House.

This can include public transport, taxis and private mileage.

In the wake of the expenses scandal, responsibility for setting MPs’ salaries was handed to the Independent Parliamentary Standards Authority (Ipsa).

It decided that annual pay rises should be pegged to the change in average weekly earnings in the public sector for October.

That figure was calculated by the Office for National Statistics (ONS) before Christmas as 3.1 per cent.

Ipsa is expected formally to confirm the increase at the start of next month, after the ONS carries out any revisions – although the figures have not changed previously.

A House of Lords spokesman confirmed that the cross-party Commission had decided peers would get an equivalent bump.

‘In April 2018 it was agreed to link increases to the daily allowance to the figure used by Ipsa for increasing the salaries of MPs, which itself is linked to public sector pay awards.

‘In the last decade the House of Lords daily allowance has increased by 4.3 per cent. In that same period the salaries of MPs went up by more than 20 per cent.

‘By linking the daily allowance increase to Ipsa’s method it ensures that any increase is set by an independent body and members are no longer setting their own allowance levels.’

An internal report, disclosed to MailOnline under freedom of information rules, says the allowance system for peers has ‘known weaknesses’.

While members have to certify that they were carrying out ‘Parliamentary work’ to claim the £313 per diem, staff have no way of assessing whether that is true because there is no ‘agreed definition’ of what it means.

The watchdogs also raised fears that the attendance record might be ‘inaccurate’, and that mileage claims are ‘uncertain’, with the risk that politicians might be putting in for ‘journeys that were not in fact undertaken’.

The concerns were highlighted in an internal report from Acting Finance Director Paul Thompson, which was prepared for the cross-party Lords Audit Committee last summer.

John O’Connell, chief executive of the TaxPayers’ Alliance, said: ‘This increase looks like a plum deal for the Peers, but a rum deal for the taxpayer.

‘These allowances are rightly meant to cover the costs of working in Westminster, to make sure the best and brightest can serve in parliament, not to offer the Lords and Ladies a large pay increase completely tax free.

‘If allowances are to go up, they should be going up by inflation and not a penny more.’ 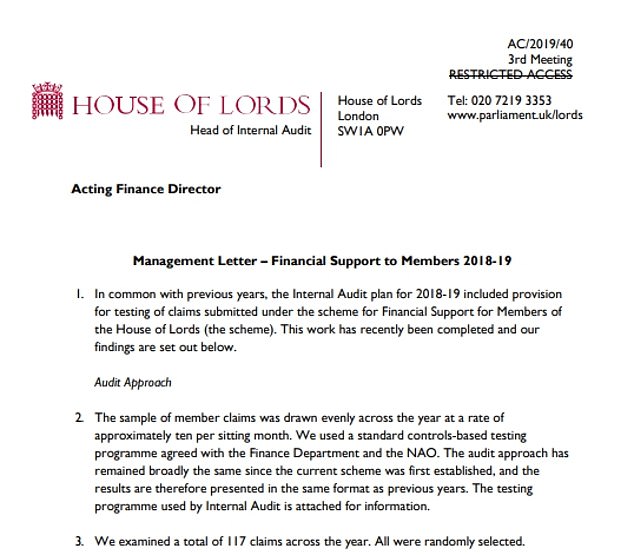 An internal report, disclosed to MailOnline under freedom of information rules, says the allowance system for peers has ‘known weaknesses’ 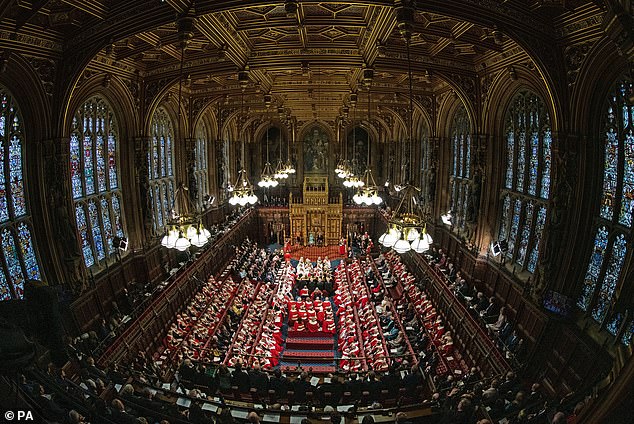 Peers are set to hand themselves a 3.1 per cent pay rise – meaning they will get £323 per day tax-free. PIctured is the state opening in December