Boris Johnson speculates about his future in Cabinet

Boris Johnson openly speculated about his future in government last night after he was rebuked by Theresa May for speaking out over Brexit.

Amid a deepening Cabinet row over strategy, the Foreign Secretary repeated his concerns about the dangers of being dragged into a long transitional deal.

Friends said he was also concerned that Remainers in the Cabinet might wreck Brexit by keeping Britain in the single market in the long term.

Speaking in New York, where he is due to have a showdown with the Prime Minister today, he suggested he was toying with quitting.

Speaking in New York, where he is due to have a showdown with the Prime Minister today, he suggested he was toying with quitting 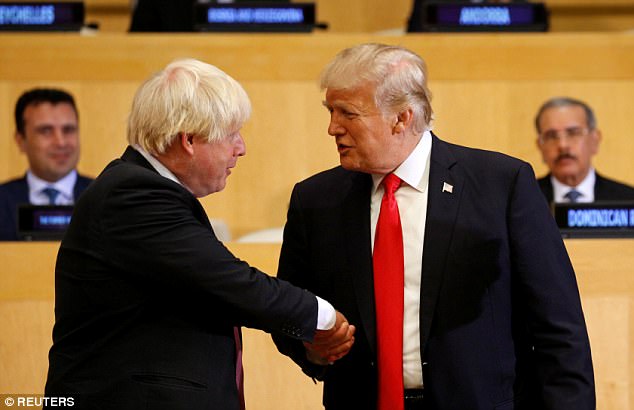 Asked if he was planning to do so, the Foreign Secretary initially said: ‘I think you may be barking up the wrong tree.’ But he later added: ‘When the burden of office is lifted from my shoulders I will of course look back with great pride on my time doing all sorts of things.’

Mr Johnson’s father Stanley also suggested his son was unhappy with the Government’s position on Brexit ahead of a major speech by Mrs May.

‘This is so important,’ he said. ‘I would have thought he would be happy, happy to walk away from the whole thing.’ Downing Street has apparently put Mr Johnson on ‘resignation watch’ amid fears he may walk out.

At the weekend he set out his vision for Brexit in a 4,000-word essay. Yesterday he was backed by former leadership rival and fellow Brexiteer Michael Gove, who tweeted support.

Yesterday Mrs May tried to reassert her control over the Cabinet ahead of her set-piece speech in Florence on Friday.

Asked whether she was frustrated by the Foreign Secretary’s actions, she said: ‘Boris is Boris. What the Government is doing and what the Cabinet is doing is that we… base our negotiations on the principles set out at Lancaster House.’

The Prime Minister dismissed suggestions she was allowing Mr Johnson to act as a ‘back seat driver’.

Speaking to reporters on a flight to Canada, she said: ‘This Government is driven from the front and we are all going to the same destination.’

The Prime Minister flatly rejected Mr Johnson’s call to make it clear that money saved from EU budget payments would be spent on the NHS. She refused to back him in his row with statistics watchdog Sir David Norgrove over the claim that leaving the 28-state bloc would free up £350million a week.

But her attempts to silence Mr Johnson appeared to have little effect. At an impromptu press conference in New York he again set out his concerns about a lengthy transition period, saying: ‘It is pretty important that it should not be too long and business should have a clear sense about where we are going and what it is like at the end of it.’ 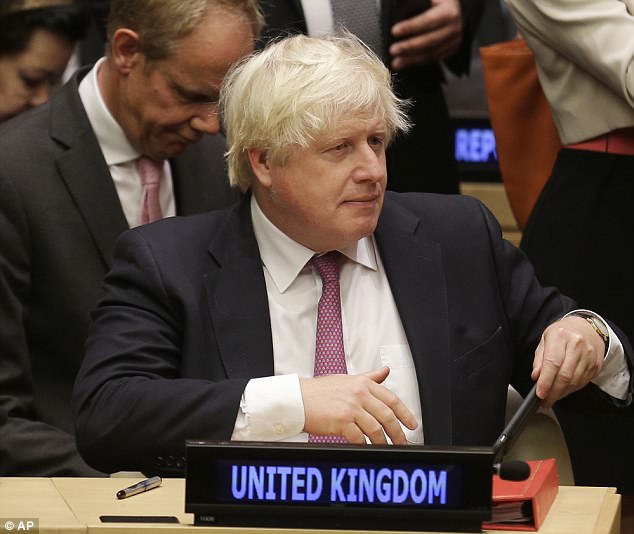 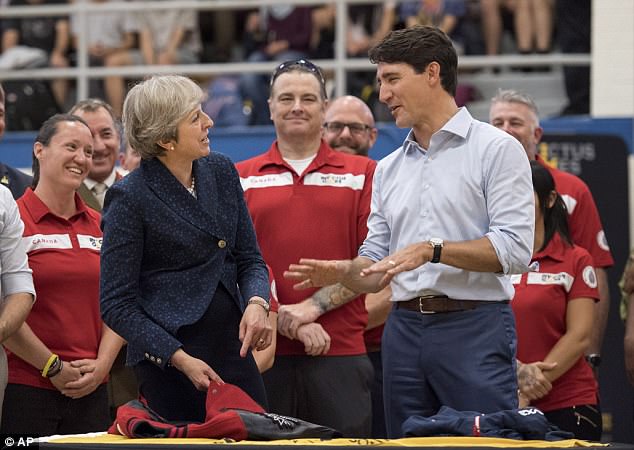 Friends of Mr Johnson say he ‘felt he had to act’ at the end of last week because of concerns that Remainers in the Cabinet, including Philip Hammond and Amber Rudd, were trying to sign the UK up to a deal that would keep it the single market for good.

Pro-Brexit ministers, including Mr Johnson and Mr Gove, favour a deal that would leave the UK much freer to set its own laws and taxes and strike its own trade deals.

The spat over Europe has dismayed many senior Tories. Commenting on what he described as ‘party discord’, defence minister Tobias Ellwood said: ‘Many would agree we are not witnessing our finest hour – at a testing time when poise, purpose and unity are called for.’

At a joint press conference with Mrs May in Ottawa yesterday, Canadian PM Justin Trudeau said he wanted a new trade deal with the EU, which comes into force this week, to continue in all but name with the UK after 2019.

Mr Trudeau said there was no reason for it to be interrupted by the UK’s exit from the EU.

‘Within the EU, the UK is the largest trading partner that Canada has,’ he said. ‘The UK was deeply involved throughout this negotiation toward Ceta in the past seven years. It will form the basis for the way we move forward in the post-Brexit Europe.

‘We are very confident we are going to be able to continue strong trade ties and commercial relationships.’