Boris Johnson will have a private audience with Donald Trump during his state visit to Britain, according to friends of the president.

One scenario could see Mr Trump hosting a private dinner party at Winfield House, the US ambassador’s palatial London residence, where he will stay during the trip due to the ongoing renovations at Buckingham Palace.

The US leader is also considering including Brexit Party leader Nigel Farage on the guest list, sources close to the plans suggested. 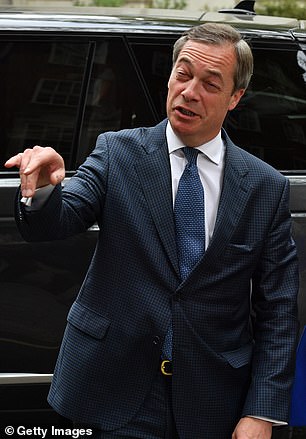 Donald Trump and Boris Johnson at the NATO summit in New York on September 18, 2017; and Nigel Farage in London on Wednesday

The reports in The Sunday Times will fuel fears President Trump could use the visit to embarrass Theresa May, who he has repeatedly criticised for her approach to Brexit.

He has previously described Mr Johnson as a ‘friend’ who would make a ‘great prime minister’.

A government source said: ‘There are fears within government circles about any potential meeting with Boris Johnson so the timetable is being scrutinised to limit the opportunities he has to do his own thing.’

Mr Trump will hold bilateral talks with Mrs May at Downing Street during the visit from June 3-5, and will take part in commemorations in Portsmouth marking the 75th anniversary of the D-Day landings.

Jeremy Corbyn has already said he will not attend a banquet held in Mr Trump’s honour – claiming it was wrong to ‘kowtow’ to a president who tore up international treaties and used ‘racist and misogynist rhetoric’.

Mr Corbyn was immediately accused of hypocrisy for refusing to dine with the leader of the world’s most powerful democracy despite having previously broken bread with terrorists and extremists. 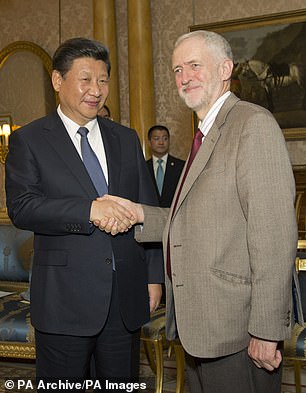 These include representatives of the terror groups Hamas and Hezbollah, convicted IRA volunteers, Gerry Adams, President Assad of Syria, as well as President Maduro of Venezuela.

The white tie dinner banquet at Buckingham Palace, hosted by the Queen, is always one of the key events of any state visit.

It is traditionally attended by senior politicians – including the leader of the opposition – and other dignitaries.

However, during the last state visit – made by King Willem-Alexander of the Netherlands in October – he was represented by shadow foreign secretary Emily Thornberry.

On that occasion, he was believed to have been attending a family event.

The Labour leader also missed the banquets staged to mark the July 2017 visit of King Felipe VI of Spain, and the official visit of the Colombian President Juan Manuel Santos in November 2016.

Mr Trump’s visit is highly controversial and is expected to attract mass demonstrations.

The Prime Minister was widely was widely criticised for inviting the US leader to make a state visit just days into his presidency in 2017.