Boris Johnson today said gyms should be able to reopen ‘in a couple of weeks’ and wants to get theatres open again ‘as fast as we possibly can’.

The PM told LBC Radio this morning that his government will get gyms reopened ‘as soon as we can do it in a Covid-secure way’.

He added ‘the best way forward for the country is to get the economy moving again’ by kickstarting every ‘vital’ part of ‘our industry’ including theatres.

The revelations come ahead of the reopening of much of England’s hospitality sector tomorrow – on what is being dubbed ‘Super Saturday’.

Pubs, restaurants, hairdressers and museums can all expect to reopen tomorrow, as police chiefs appeal to Britons to keep calm as they head to boozers. 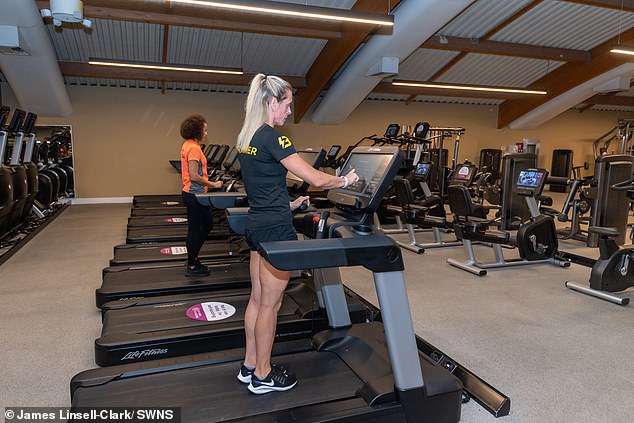 The David Lloyd fitness centre in Chigwell has put various measures in place in the hope of reopening in the near future, such as moving equipment to have two metres distancing 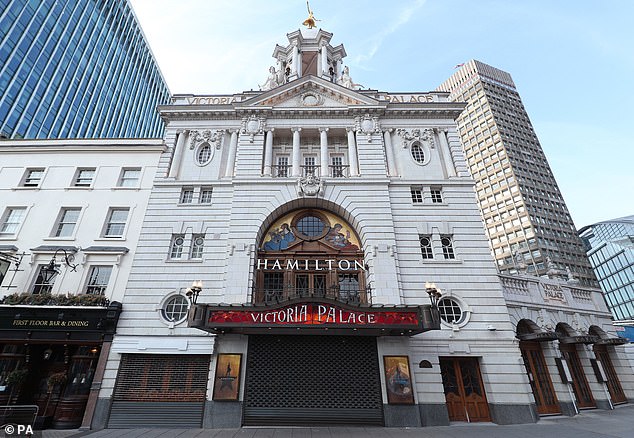 Mr Johnson  added ‘the best way forward for the country is to get the economy moving again’ by kickstarting every ‘vital’ part of ‘our industry’ including theatres (pictured, the Victoria Palace Theatre, London, previously showing ‘Hamilton’, June 23, 2020)

Though outdoor gyms and playgrounds may reopen tomorrow, indoor gyms are remaining closed because of the risk of indoor virus transmission.

Swimming pools and nightclubs are also remaining closed for the time being.

Meanwhile the PM also revealed that he was keen to get theatres open to the paying public again ‘as fast as we possibly can’.

It comes as a spokeswoman for the National Theatre confirmed to MailOnline that it had laid off some of its front of house staff.

In a statement, the Theatre said: ‘We have committed to paying our casual staff who work front of house until the end of August, but very sadly due to the changes in the government Job Retention Scheme we simply cannot afford to offer financial support beyond that point, when we won’t be back performing as usual.

‘We hope that additional financial support from government may be forthcoming that may allow the NT to begin performing again in a limited way, however, it is set to be many months before it will be possible to perform to audiences at usual capacities, so regrettably a proportion of job losses are unavoidable as both income and activity levels will be impacted across the organisation.’

Last month, theatre bosses call on the government to save the industry from ‘catastrophic collapse’ and venues from permanent closure.

The government had previously confirmed that indoor gyms would be reopened later this summer, though had not specified when.

Alok Sharma, the Business Secretary, said last month that reopening indoor gyms could be possible ‘at some point later on in July’. 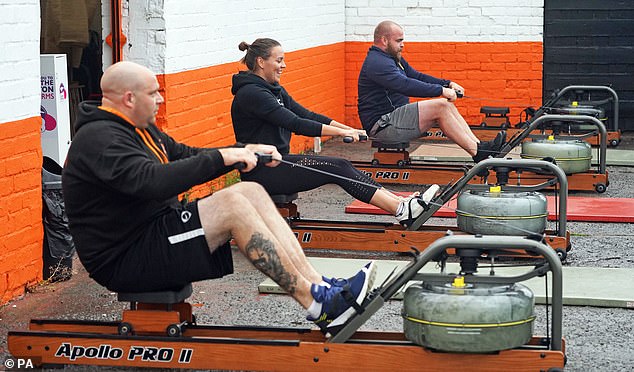 Though outdoor gyms and playgrounds may reopen tomorrow, indoor gyms are remaining closed because of the risk of indoor virus transmission (pictured, people take part in a small exercise class at the Lionheart Fitness gym in Bedlington, Northumberland) 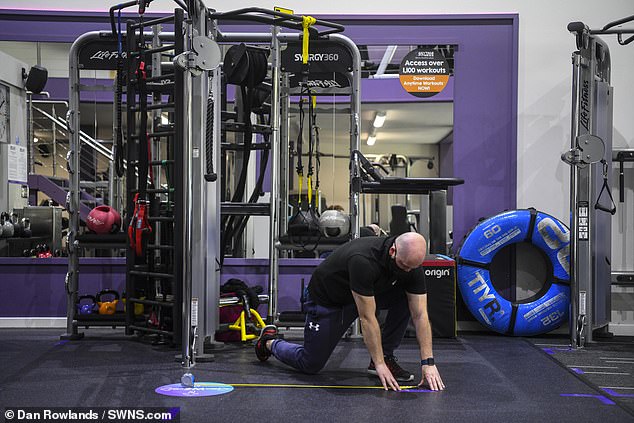 Culture Secretary Oliver Dowden had tweeted ‘subject to public health, our aspiration is to reopen gyms & leisure facilities in mid-July’.

He thundered: ‘So what we hear is that pubs and restaurants will be able to reopen, but health and fitness facilities won’t be able to.

‘To us, this is bizarre because we are part of the solution.’

Huw Edwards, the chief executive of UK Active, said they are in ‘conversations with the government to establish a clear roadmap to reopening’.

He said: ‘Many people will be understandably frustrated by the decision not to reopen the fitness and leisure sector from July 4.

‘Our sector’s safety standards are among the highest in Europe, where other nations have already reopened their gyms and leisure facilities safely. 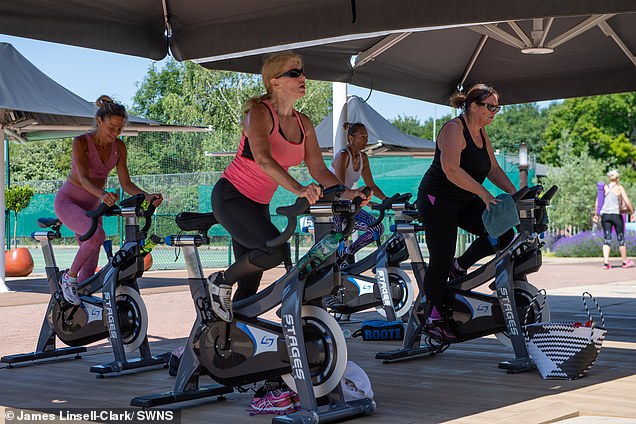 The PM said that his government will get gyms reopened ‘as soon as we can do it in a Covid-secure way’ (pictured, outdoor spin class at a David Lloyd fitness centre in Chigwell) 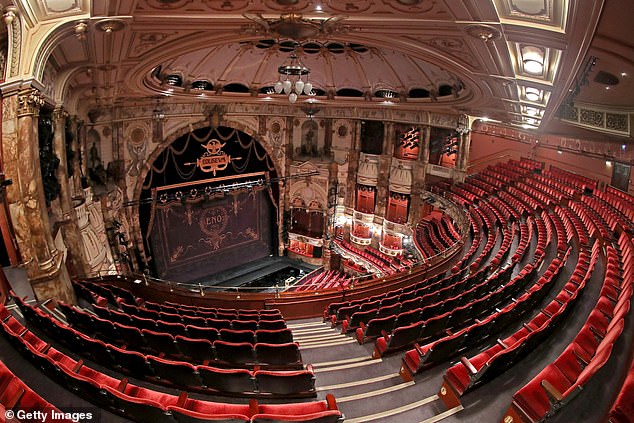 The London Coliseum, the largest theatre in London’s West End, is closed along with the rest of London’s theatre district, due to the pandemic (pictured, June 11, 2020) 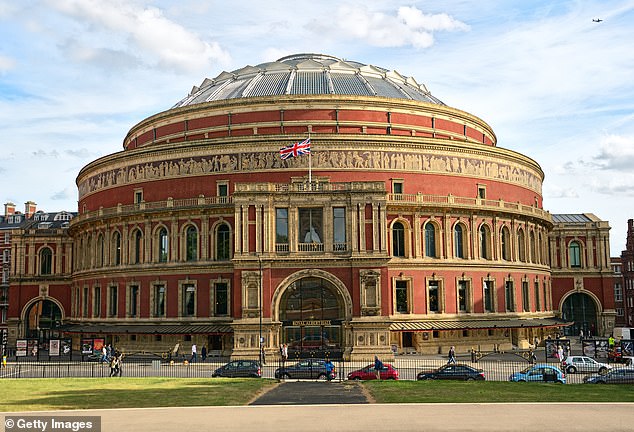 ‘We have invited Government and health officials to visit any of the hundreds of gym and leisure centre show sites across the country, and witness how facilities would operate with thorough social distancing measures and hygiene standards in place.

‘Any further delay to our reopening will threaten our nation’s recovery from Covid-19. With obesity the second largest cause of hospitalisation from this virus, gyms and leisure centres are equipped to not only combat Covid-19 but to support rehabilitation for those recovering from the virus.’

Britain’s leading 85 arts organisations, including including the National Theatre, had called on Mr Johnson to provide ‘immediate and substantial’ financial support in a letter published in The Times two weeks ago.

The chief executive of the Royal Albert Hall had also warned ministers they must provide solutions in ‘weeks not months’ to aid the reopening of the creative sector.

RAH chief executive Craig Hassall had said venues including his own, The Old Vic and Shakespeare’s Globe would be unable to reopen despite the reduced measures.

The letter, signed by Dame Margaret Hodge, chair of the Theatre Royal Stratford, and Glenn Earle, chair of the Young Vic – among others – said: ‘Theatre is a national success story, vital to Britain’s economic prosperity. 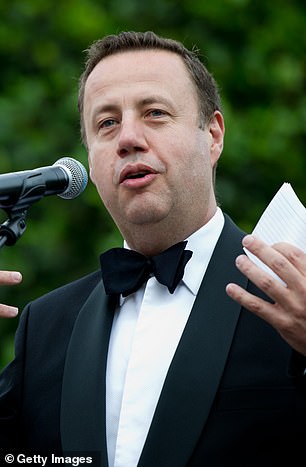 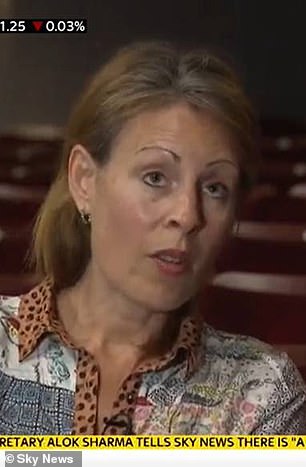 Craig Hassall (left), the chief executive of the Royal Albert Hall, has warned that the Government must provide solutions in ‘weeks not months’ (right, Kate Varah, chief executive of The Old Vic theatre, who has told Sky News that they need ‘urgent’ help) 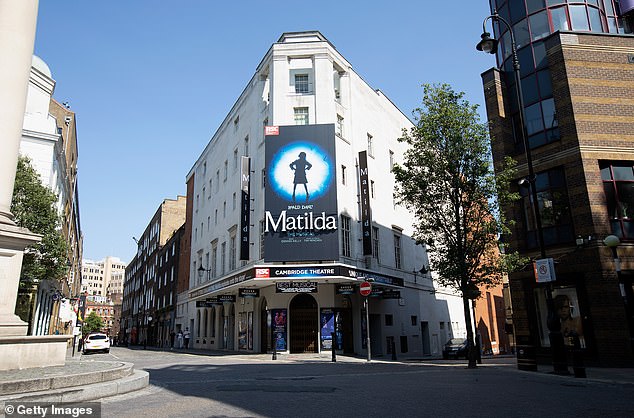 A view of the closed Cambridge Theatre in Covent Garden during lockdown (June 23, 2020)

‘Our industry depends on the £1.3billion of annual ticket sales that has now disappeared, with disastrous effects on companies, employees and freelancers.

‘Even with a one metre social distancing rule we could fill only about 25 per cent of our seats, which is not a financially feasible option.

‘Without immediate and substantial support, theatres and performing arts companies will close and tens of thousands of artistic careers will be cut short.’

Mr Johnson also faced questions on why pubs were being opened on a Saturday, usually the busiest drinking day of the week. 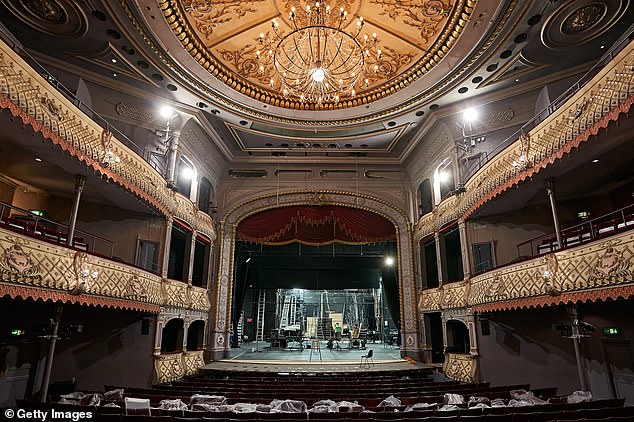 A general view of a deserted Old Vic Theatre, on June 9, 2020 in London, England

He was asked if he only ‘hoped’ it would be safe, replying: ‘It’s not on hope, it’s based on a clear understanding of the statistical risks that we now face as a country.

‘We’ve progressed thanks to the efforts of the British people from an incidence of the disease at about one in 400 a few weeks ago to maybe one in 2,200 today.

‘You’re appreciably less likely now to be in close proximity to someone who has it than you were even a couple of weeks ago.

‘We’re making progress, we aimed for July the 4th, we wanted to set ourselves a target, we think we’re in good shape but my message is let’s not blow it.’

The steps indoor fitness chains are taking to keep ‘Covid-secure’

Fitness chains have revealed the steps they are taking to keep ‘Covid-secure’.

The chain has introduced new outdoor exercise timetables at around 50 of its 115 clubs around the UK, with up to 90 classes per week.

These include yoga, pilates and group exercises like HIIT workouts.

Five gym members plus one instructor will be allowed per session, and each person will have to keep their social distance.

Tennis courts at 70 of its sites have also started opening up.

Equipment has been moved apart to allow for one or two-metre distances, while the gyms will be subjected to frequent deepcleans.

Fitness First will be encouraging members to help clean their machines after use when it reopens its 120 gyms.

Staff will be required to wear PPE, while gym-goers will have to help keep the gym clean using cleaning stations and hand sanitisers.

Gym-goers will be able to keep two metres apart, thanks to spreading equipment around the centre. Some machines will be turned off.

Staff and members will also be subjected to temperature checks upon entry.

Equipment will be spaced out while some machines will be turned off at its near 260 sites around the UK.

Boxes will be marked out on the floors so people can keep their distance.

The fitness centre will conduct regular cleans while members will be asked to wipe down their machines after their use.

The number of customers allowed inside at one time will be limited.

Contactless entry will be encouraged when you arrive.

There will be strict ‘no stop and chat’ rules to keep gym-goers safe.

Screens have been installed around treadmills and some equipment have been turned off completely.

The fitness chain will also conduct more deep cleans, while it will ask its members to keep their workout time to a maximum of one hour.