By Political Editor For The Daily Mail

Boris Johnson is expected to return to Downing Street on Monday to resume work part-time.

The Prime Minister has spent a fortnight at his country retreat, Chequers, after being hospitalised with coronavirus.

Allies warned he is still suffering the ‘debilitating’ effects of the illness, which saw him spend three nights in intensive care.

A source said Mr Johnson was likely to remain ‘part-time for some time’, adding: ‘It will be a while before he is working 14-hour days again.’

Britain’s Prime Minister Boris Johnson speaks from 10 Downing Street praising NHS staff in a video message, after he was discharged from hospital a week after being admitted

Mr Johnson himself has made no public comment since he was discharged from St Thomas’ in central London on April 12.

After leaving hospital, Mr Johnson recorded a heartfelt tribute to the medics who cared for him – and revealed his condition had been so serious that ‘things could have gone either way’.

Downing Street has given little detail of the Prime Minister’s condition in recent days, other than to say his recovery is continuing.

However, Health Secretary Matt Hancock said yesterday that he had spoken to the Prime Minister on Thursday and found him in ‘ebullient’ form.

‘He’s definitely on the mend in a big way,’ Mr Hancock told BBC Radio 4’s Today programme. ‘When exactly he comes back is a matter for him and his doctors.’

Donald Trump, who also spoke to Mr Johnson by phone this week, told reporters: ‘He sounded incredible, he was ready to go… it’s like the old Boris, tremendous energy, tremendous drive.

He was so sharp and energetic. He’s an incredible guy – they are lucky to have him over there.’ Foreign Secretary Dominic Raab has been deputising for the Prime Minister since he was admitted to hospital on April 5.

Mr Johnson has not been receiving his daily ‘red box’ of government papers, nor has he been directly involved in decision-making. He has, however, had a phone call with the Queen. 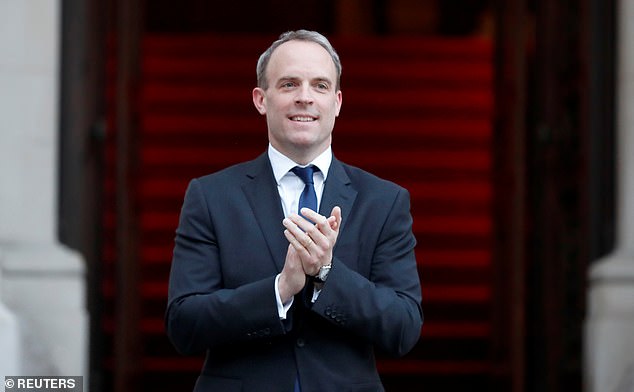 Dominic Raab, who has been deputising for the PM,  applauds to show his appreciation for the NHS staff working amid the coronavirus disease (COVID-19) outbreak

His spokesman said: ‘This week he has done things he didn’t do the week before.’ Downing Street insisted Mr Johnson would not rush back, and echoed Mr Hancock’s comments that his work schedule would be ‘based on the advice of his doctors’.