British Prime Minister Boris Johnson will tell the European Union that he is prepared to accept post-Brexit border checks.

In a speech next week Mr Johnson will also say that sovereignty is more important than frictionless trade.

The Prime Minister’s address will come in apparent defiance of EU warnings that Britain must accept the bloc’s standards on goods for the best trade agreement, as reported by The Daily Telegraph.

It means he will tell businesses they could potentially face more paperwork and checks at the border.

Boris Johnson, pictured outside No10 yesterday, will tell the European Union that he is prepared to accept post-Brexit border checks

However it is a price Mr Johnson is willing to pay in order to stick to some of his own promises, such as full control of Britain’s fishing waters.

It comes as there were emotional scenes in the European Parliament on Wednesday as MEPs voted by 621 to 49 in favour of the Withdrawal Agreement and linked hands to sing a final chorus of Auld Lang Syne.

In contrast, Brexit Party leader Nigel Farage had his microphone cut off during a fiery departure speech in which his party’s MEPs cheered and waved union flags as he said the UK was ‘never coming back’.

He said: ‘The book is about to close and we are going to leave in 48 hours and that is for me, in a way, the achievement of my lifetime political goal.

For most MEPs, who have long wanted Britain to stay, it was a moment of deep regret.

Addressing the parliament, European Commission president Ursula von der Leyen said she was determined the EU and the UK should remain ‘good friends and good partners’. 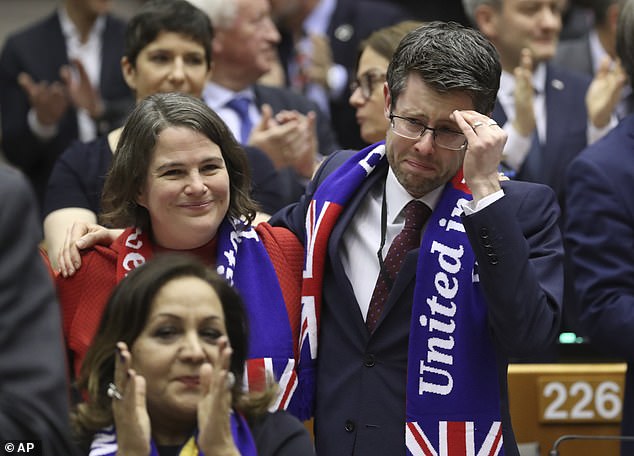 There were emotional scenes in the European Parliament on Wednesday as MEPs voted by 621 to 49 in favour of the Withdrawal Agreement and linked hands to sing a final chorus of Auld Lang Syne.

‘We will always love you and we will never be far. Long live Europe,’ she said.

The parliament’s Brexit co-ordinator Guy Verhofstadt said the departure of a country which had ‘twice given its blood to liberate Europe’ was a ‘sad’ moment.

He predicted, however, that the UK would eventually rejoin, with many British people deeply unhappy at the prospect of leaving.

‘So this vote is not an adieu, this vote, in my opinion, is only an au revoir.’

Mr Verhofstadt poured scorn on claims by supporters of Brexit that it would mean Britain recovering its sovereignty.

‘What is in fact threatening Britain’s sovereignty most – the rules of our single market or the fact that tomorrow they may be planting Chinese 5G masts in the British islands?’ he said.

The vote in Brussels follows the completion last week of the passage of the Withdrawal Agreement Bill through the British Parliament at Westminster.

The agreement settles the terms of Britain’s departure, including future citizens’ rights, the arrangements on the Northern Ireland border and the UK’s divorce settlement.

It also allows for an 11-month transition period, during which the UK will continue to follow EU rules while talks take place on a free trade agreement.

Mr Johnson has said he wants a comprehensive deal – covering all aspects of Britain’s future relationship with the EU, including security – by the end of the year.

He has been adamant he will not contemplate any extension of the transition period beyond the end of 2020.

However, senior EU figures have repeatedly warned reaching such a wide-ranging agreement will not be possible within such a tight timetable.