Twitter has been left divided over Boris Johnson’s election as leader of the Conservative Party and the next UK Prime Minister.

The hashtags #BorisDay and #NotMyPM accumulated thousands of posts within minutes of Mr Johnson being crowned Britain’s new PM.

Supporters celebrated ‘Boris Day’ as a ‘great day for our country’ and ‘time to sort out Brexit’, while others made derogatory comparisons with Donald Trump, branding the result as ‘shameful’ and a ‘disgrace’.

The former Foreign Secretary received congratulations from all over the world, including a tweet from President Trump, who wrote: ‘Congratulations to Boris Johnson on becoming the new Prime Minister of the United Kingdom. He will be great!’

His daughter Ivanka was mocked for accidentally saying Boris will be the next ‘Prime Minister of the United Kingston’. 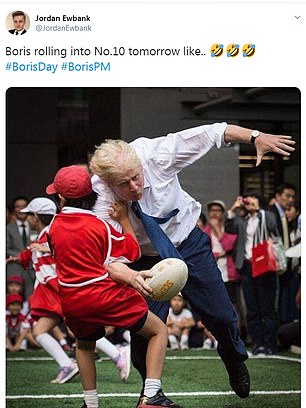 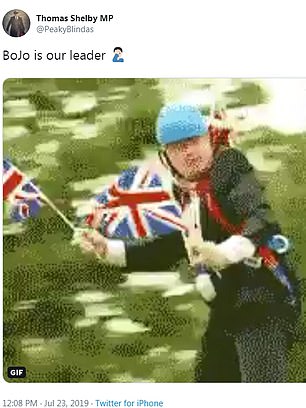 Supporters celebrated ‘Boris Day’ as a ‘great day for our country’ and ‘time to sort out Brexit’, while others made derogatory comparisons with Donald Trump, branding the result as ‘shameful’ and a ‘disgrace’

Back in the UK, voters were quick to call for a General Election, pointing out that Mr Johnson has only been elected by Tory party members and not the general public.

One person wrote: ‘THE GENERAL PUBLIC HAS NOT VOTED FOR THIS #NotMyPM’, while another critic commented: ‘Quite simply #NotMyPM’.

On the other side, people re-tweeted Conservative politicians such as Jacob Rees-Mogg and Mr Johnson’s opponent Jeremy Hunt with comments including: ‘Great day for our politics’.

Social media was awash with hilarious memes of the soon-to-be PM on a zip wire, rugby tackling people and wearing a clown outfit. 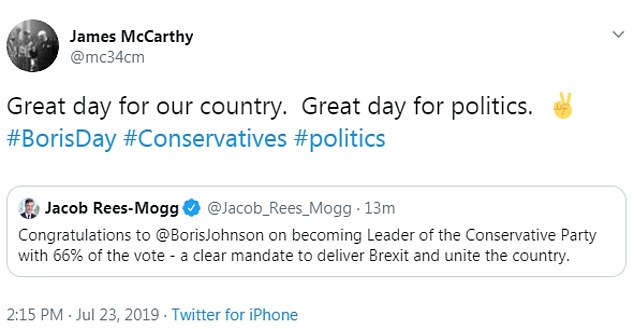 Ppeople re-tweeted Conservative politicians such as Jacob Rees-Mogg and Mr Johnson’s opponent Jeremy Hunt with comments including: ‘Great day for our politics’

Mr Johnson won by a landslide 66 per cent, with 140,000 votes from Tory activists, way ahead of Foreign Secretary Jeremy Hunt.

Family members including his father Stanley, sister Rachel and brother Jo were among those in the audience to hear the news announced at the Queen Elizabeth Centre in Westminster, but there was no sign of girlfriend Carrie Symonds.

In his victory speech, Mr Johnson – whose ambition as a boy was to be ‘World King’ – paid tribute to Mr Hunt, and thanked Theresa May for her ‘extraordinary’ service to the country.

President Trump congratulated Boris on being elected as the new PM

He said the party now had to reconcile the need for a close relationship with Europe to the desire for ‘democratic self-government’.

Mr Johnson said he would ‘deliver Brexit, unite the country and defeat Jeremy Corbyn’. He joked that the acronym for his ‘deliver, unite and defeat’ goals was ‘DUD’. But he insisted he was going to add an ‘E’ to make ‘DUDE’.

However he is also facing a potentially catastrophic Tory mutiny as MPs mobilise against his ‘do or die’ vow to secure Brexit by Halloween – even if it means crashing out without an agreement.

She will then travel to Buckingham Palace to formally resign to the Queen, before the monarch sends for Mr Johnson.

Mr Johnson should be outside Downing Street by around 5pm when he will enter his new home as leader. 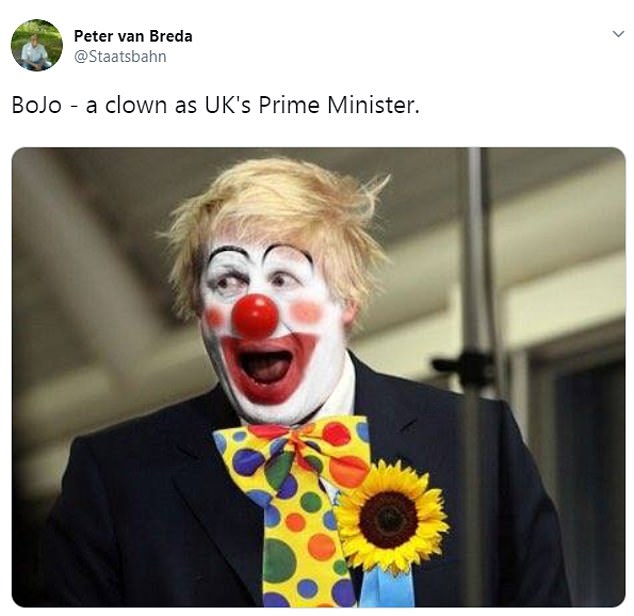 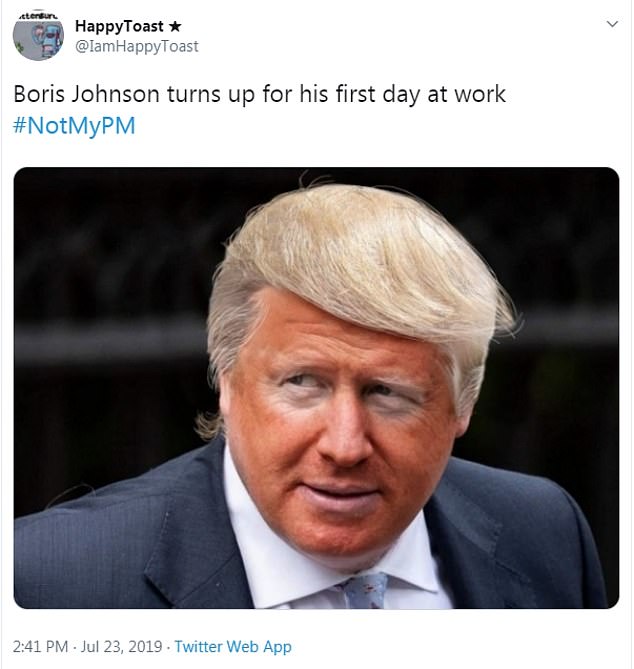 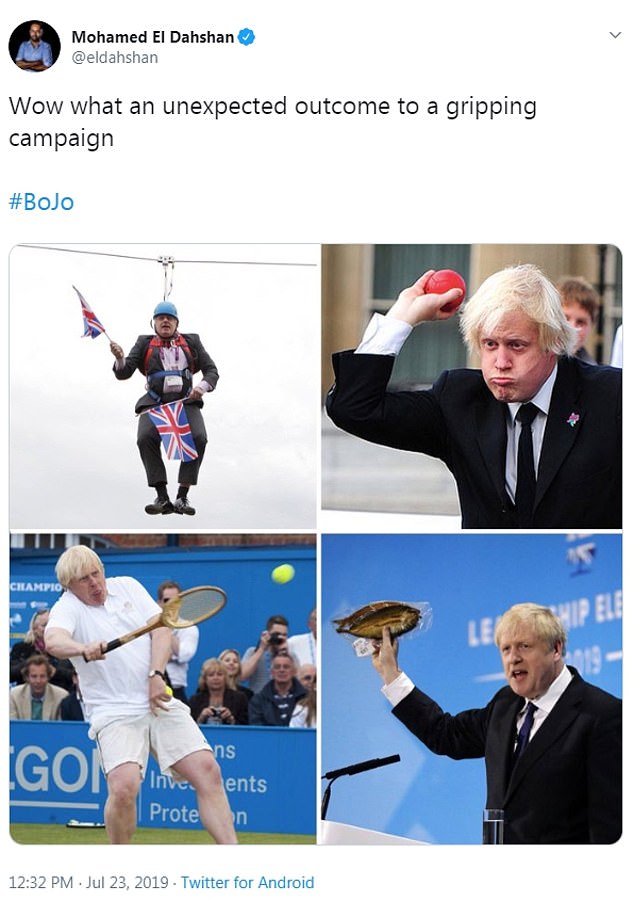 Having won the Tory leadership contest over Jeremy Hunt, Boris Johnson must now turn his attention to preparing for government.

This afternoon: Mr Johnson is expected to head to a bunker where he will hammer out the details of who will serve in his top team.

He then visited Tory HQ, and is due to address the 1922 Committee of Conservative MPs at 4pm.

This evening: Mr Johnson will prepare for what is likely to be the biggest day of his political life.

Tomorrow lunchtime: Theresa May will hold her final Prime Minister’s Questions at lunchtime, before heading to Buckingham Palace to formally resign as PM.

The Queen will then send for Mr Johnson and invite him to form a new government.

He will then deliver a short speech in the street in front of the famous black door.

His girlfriend Carrie Symonds is not thought to be planning to make an appearance when Mr Johnson enters Number 10.

Tomorrow evening: He will turn his attention to his first major task: His Cabinet reshuffle.

He is expected to make appointments to the first few big jobs in the government but leave the less important ones for the next day.

However, whether or not he will get to sack those ministers he does not want in his administration remains to be seen.

A number of Remain-backing Tory big beasts have said they intend to resign before they can be pushed out.

They include Chancellor Philip Hammond and Justice Secretary David Gauke.