‘Blatant Brexit bias’: John Bercow has been demanded to leave by a group of Tory MPs and say a new candidate should be given the spot if a snap election is called

Angry Tory loyalists last night demanded that John Bercow be punished for his ‘blatant Brexit bias’ by being booted out of his Commons constituency.

Allies of Boris Johnson called on party bosses to ditch convention and field an official Tory candidate against the Speaker in his Buckingham seat if a snap Election is called. The move would shatter the Commons tradition that Speakers are not opposed by the major political parties when they stand for re-election.

But it comes amid Tory predictions that Mr Bercow will once again abandon impartiality by aiding a bid to block Brexit by Remainer rebels and Labour at Westminster this week.

A senior Minister even suggested that the Speaker himself harboured ambitions to be the so-called ‘unity Prime Minister’ who would replace Mr Johnson and lead an anti-No Deal interim government. 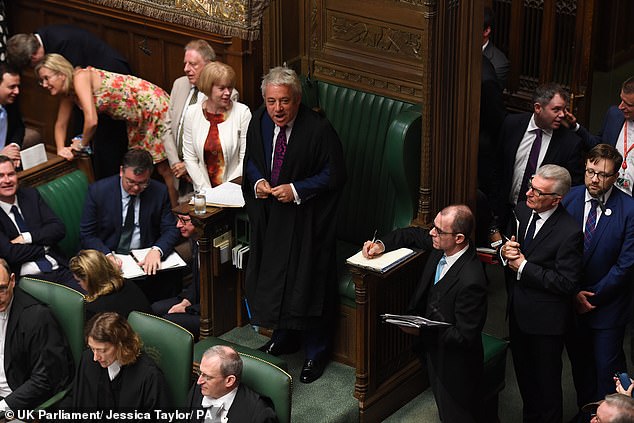 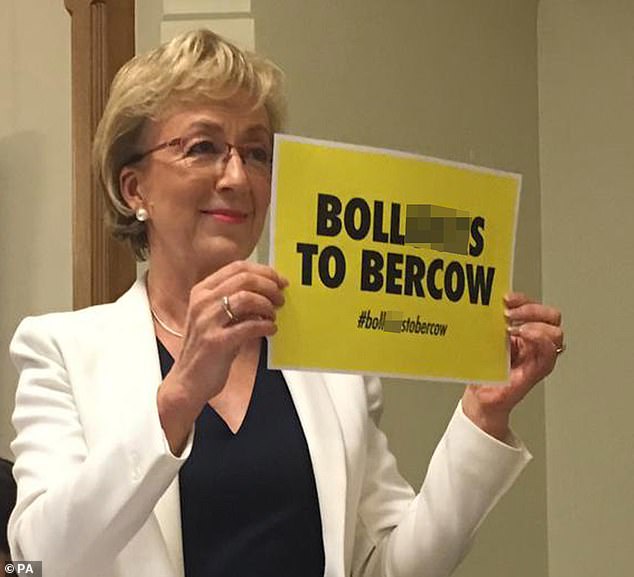 And in an article for The Mail on Sunday, Natascha Engel – one of Mr Bercow’s former Deputy Speakers – accuses him of being ‘in open opposition to the people who voted to leave’ and risking the very hard Brexit Remainers want to avoid.

The outspoken Mr Bercow, who voted Remain in 2016, enraged Ministers and Brexit-backing Tories last week by interrupting his holiday in Turkey to brand the Prime Minister’s decision to prorogue Parliament a ‘constitutional outrage’. The remark, together with claims that he has held secret talks with anti-No Deal Tory MP Sir Oliver Letwin, fuelled Brexiteer suspicions that he will this week ‘bend’ Commons rules to help prevent Mr Johnson getting Brexit over the line by October 31.

He is expected to grant the so-called ‘rebel alliance’ of Labour, Lib Dem and Tory dissidents a special debate to allow them to take over the Commons agenda on Wednesday and pass a Bill ruling out a No-Deal Brexit despite repeated warnings that without that threat, Brussels will never give the UK a good deal.

In line with Commons convention, Mr Bercow has been unchallenged in his Buckingham seat from the major parties since becoming Speaker in 2009. 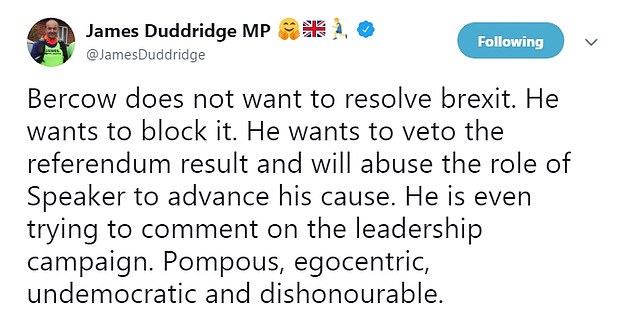 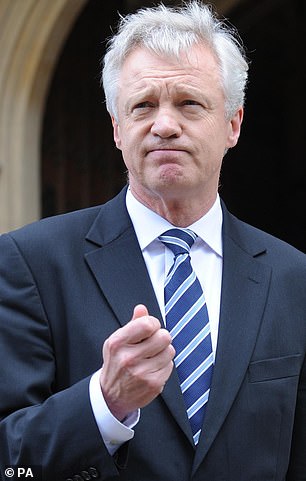 Last night, Tory backbencher David Davies demanded an end to that privilege if he stands for re-election as an MP. He called on Tory chairman James Cleverly to intervene with the Buckingham Conservative Association to get them to field an official Tory candidate. Mr Davies said: ‘The reality is now that the gloves are off. Remain-supporting MPs – including Mr Bercow – are using every trick in the book and tearing up all precedence to try to prevent the democratic voice of the public from being heard on Brexit.

‘We have to fight this battle in the same way. If that means breaking the precedent of not standing against the Speaker in his constituency at the next General Election, then so be it.’

Monmouth MP Mr Davies added that even if Mr Bercow was returned to the Commons, Tory MPs should vote him out of the Speaker’s job. He said: ‘The Remain-supporting Speaker is not acting in an impartial fashion. He is simply following his own instincts, which are out of touch with those of the Conservative Party that he owes his career to and those of the people of Britain who have expressed their wish to leave, not just in the referendum, but also in the 2017 General Election and the 2019 European elections.’

Last month, Mr Bercow said he would fight any attempt to prorogue Parliament ‘with every bone in my body’ but he has denied acting improperly over Brexit.

However, in January, he overruled his officials by allowing a vote on an amendment that forced then Prime Minister Theresa May to present an EU Withdrawal Bill ‘Plan B’ to MPs after they rejected her deal. He admitted he had flouted precedent, saying: ‘If we were guided only by precedent, manifestly nothing in our procedures would ever change… I have made an honest judgment.’

The move led to former Tory Minister Crispin Blunt to say: ‘Many of us will now have an unshakeable conviction that the referee of our affairs… is no longer neutral.’

Last night, one senior Minister told The Mail on Sunday that he suspected that so great were the Speaker’s Remainer convictions, that he himself fancied taking on the role of interim PM if Mr Johnson was forced out.

But allies of the Speaker branded the idea ‘absurd’ and claimed the Government was simply trying to smear Mr Bercow ahead of this week’s showdowns.

Mr Johnson has defended his decision to prorogue Parliament, saying that ‘the more the parliamentarians try to block the No Deal Brexit, the more likely it is that we’ll end up in that situation’.

Asked whether the Speaker did intend to stand at the next Election, Mr Bercow’s spokeswoman said that he would tell the Commons ‘in the event he has anything to say on his future plans’. 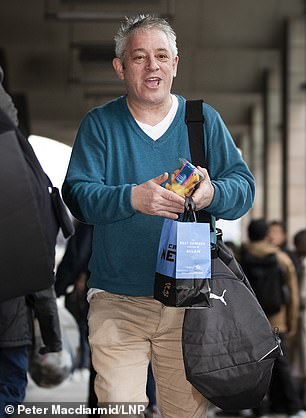 When Parliament returns this week, all eyes will be on the battle of wills and wits between the Prime Minister and the Commons Speaker. John Bercow may believe that what he is doing is defending the rights of Parliament and its duty to hold the executive to account. In fact, there is much more at stake as his latest interventions on Brexit show.

The Speaker is doing nothing less than changing the historic relationship between Parliament as the legislature and the Government as the executive in a fundamental way. If he succeeds, it won’t be the Prime Minister proroguing Parliament that will be remembered as a ‘constitutional outrage’, to quote Mr Bercow’s own words last week.

Despite being a former Conservative MP, Mr Bercow could never be accused of pro-Tory bias. Far from it. Moreover, when it comes to Brexit, he has never made a secret of his views or willingness to enter the political fray. But by trying to stop the Prime Minister’s potentially No Deal Brexit, Mr Speaker appears to be moving in the direction of a US-style Speaker.

By tradition, Commons Speakers are politically impartial whereas the US Congress Speaker has an overtly political role. 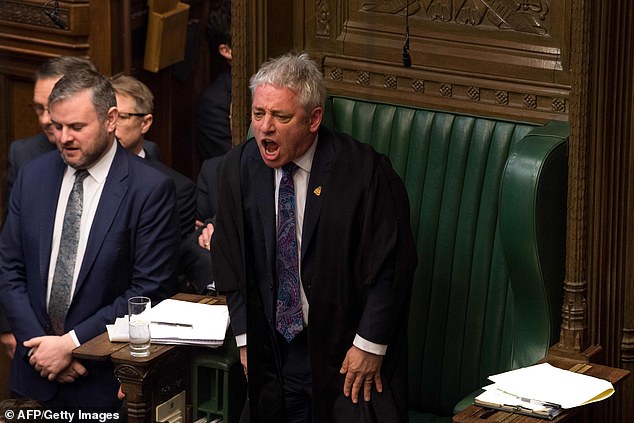 Some may say Mr Bercow embarked on this controversial road a long time ago. But the consequences of what may now unfold are much more serious. Until the 2016 referendum, Parliament was firmly the representative of the people and the people were happy that their Parliament was sovereign.

But David Cameron passed that sovereignty from Parliament to the people by asking them to vote on whether we should Leave or Remain in the EU.

The people were told that their decision was binding. Leave or Remain, it would be implemented. When the votes came in, we saw a seismic shift in representation, with the Government trying to implement the will of the people against a Remain Parliament trying to stop them. The only way that Parliament could do so was with a Speaker willing to invent new rules. He has done so already with the ‘Cooper-Letwin Bill’, which effectively extended Brexit Day to October 31 and he has made known that he is about to try again.

In doing so, Mr Speaker is not only in open opposition to the people, who voted Leave, but he may actually cause the hard Brexit that his Remain supporters are so keen to avoid.

We know that Boris Johnson won’t let his hands be tied.

Should the Speaker allow Parliament to legislate to force the Government to ask for an extension to Brexit, then the Prime Minister will call a General Election – during which a hard Brexit could happen on October 31 by default. In a campaign that pits Parliament versus people, the Speaker could find himself on the losing side, with the Election result being a Boris Johnson administration with a majority.

Surely even Mr Bercow must recognise that he cannot change the role of Speaker from impartial referee to partisan player-manager by executive order. As powerful as he is, these are major constitutional changes that need the agreement of all those concerned.

Mr Speaker has always liked to play high stakes but this week he will be betting the House. If he wins, he succeeds in delaying Brexit to another day. If not, he could lose everything and be blamed by both Leavers and Remainers for changing the rules on something that – for both sides – is really not a game.

l Natascha Engel is the former Labour MP for North-East Derbyshire and now a partner with the Public First consultancy.