Britain’s Brexit battle has come to a head once again with Boris Johnson’s decision to suspend Parliament for five weeks starting on September 9.

This gives Remainer MPs just days to spring their plot to stop No Deal after Parliament returns on Tuesday, September 3. Their next chance will be on October 14, when Brexit day is just two weeks away.

Rebel and opposition MPs are trying to prevent a No Deal Brexit, either by legislating to delay Brexit or by bringing down the Government in a vote of no confidence.

But Boris Johnson wants to keep No Deal as an option, hoping the threat of it will pressure the EU into making a better deal with Britain.

If Mr Johnson’s government loses a no confidence vote, there is a two week period where all parties can try to form a government that will win the support of a majority of MPs.

If no new government emerges, a General Election will be held, and whether Election day falls before or after October 31 will be crucial. If it is afterwards, the UK could leave the EU during the campaign, but this would most likely prompt legal challenges.

If a no-confidence vote is held at the beginning of next week, the Election would likely be before Brexit day. If it is later, there is more potential for it to fall afterwards.

Here, MailOnline explains what has happened and what could happen next.

What has happened today?

Boris Johnson has announced plans to suspend Parliament from mid-September until a Queen’s Speech is held on October 14, less than three weeks before the Brexit deadline.

The Government insists this is a regular procedural step unrelated to Brexit.

But opponents say the Government is trying to stop the House of Commons influencing the Brexit process. They are accusing Mr Johnson of committing a ‘constitutional outrage’.

Privy Counsellors including Jacob Rees-Mogg, the Lord President of the Council, saw the Queen at Balmoral to rubber-stamp the Goverment’s plans.

Mr Johnson confirmed the plans to MPs this morning and said he had already spoken to the Queen.

Parliament returns on Tuesday and will now break up again during the following week.

Could the Queen have blocked the request?

Technically the Queen has to grant her approval, but under Britain’s constitutional monarchy there was never any chance of her jeopardising her political neutrality by blocking the move.

She acted on the advice of her ministers by approving it.

What does Parliament do next?

MPs return from their summer recess on September 3, but Commons business will be short-lived as Parliament is set to be suspended again on September 9.

Opposition MPs say they will mount an effort to stop a No Deal Brexit in that period but time will be extremely limited because they will have three days.

They could also call a no-confidence vote in the Government. If successful, it would probably result in an election, which would make the prorogation irrelevant.

Parliament will return on October 14 for the Queen’s Speech, in which the monarch will read out the Government’s new legislative agenda.

There will then be less than three weeks before the Brexit deadline on October 31.

The pomp and procedure of the Queen’s Speech and State Opening of Parliament will eat into that time further. But Mr Johnson insists there will be ‘ample time’ for debate on Brexit. 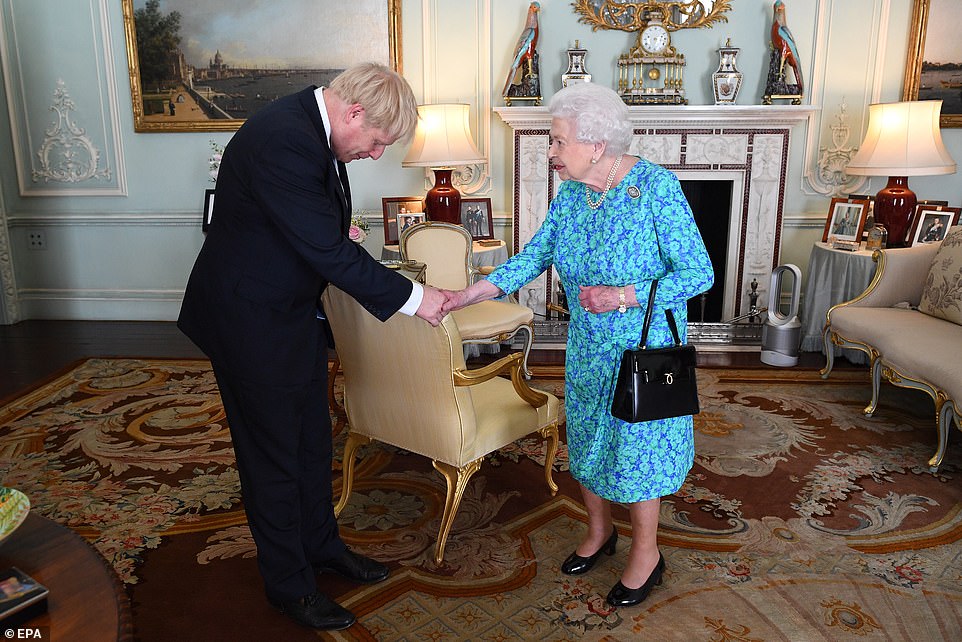 The Queen may face ‘treacherous situations’ in the weeks ahead after being drawn into the ‘contentious and divisive’ Brexit issue by the Prime Minister’s decision to suspend Parliament, an expert has said.

Mike Gordon, professor of constitutional law at the University of Liverpool, said if MPs launch a successful no-confidence vote in Boris Johnson, to challenge his proroguing of parliament, the monarch could be in a difficult position if the Tory leader refuses to resign.

While, if the opposition parties manage to get legislation through parliament to stop a no-deal Brexit, the Government could advise the Queen not to give it royal assent and so become law, against accepted convention.

Prof Gordon said today’s decision was relatively simple saying : ‘She acts on the advice of her ministers and in particular her Prime Minister and so when the Prime Minister, through the Privy Council, requests Parliament be prorogued, then realistically it’s impossible to imagine the Queen refusing to grant that. ‘

However Prof Gordon outlined possibly scenarios that could prove problematic for the head of state.

If legislation to stop a no-deal Brexit is passed by parliament, he said: ‘There’s the possibility the Government might advise the Queen not to give the royal assent and at that point we’ll be in difficult constitutional territory, I think at that point she would have a really hard decision about whether she would follow that advice or not.

The academic questioned how the opposition parties would persuade the Queen there is a viable administration waiting in the wings.

He said: ‘How, if at all, could they persuade her to sack Boris Johnson and give the alternative government a chance, if he’s refusing to resign?

‘So there’s potentially more treacherous things down the road for the Queen.’

How does prorogation officially happen?

The Queen started the ball rolling on the prorogation process today, approving a document at Balmoral which orders Parliament to be prorogued no later than Thursday, September 12.

Five people are appointed to a Royal Commission to carry out the Queen’s orders. On the day itself, they will summon MPs to come to the House of Lords chamber for the prorogation ceremony.

The Queen’s orders are read out, and any Bills that are yet to receive Royal Assent are finally rubber-stamped and become law.

In a quirky Parliamentary tradition, the Clerk of the Parliament announces the Royal Assent in Norman French: ‘La Reyne le veult’, or ‘The Queen wills it’.

A prorogation speech is read out on behalf of the Queen. Like the Queen’s Speech, it is written by the Government and reviews its legislative programme over the last year.

Parliamentary business is then over for the session and any Bills which have not been passed will usually have to be started afresh in the next session.

What do opposition MPs want to do?

A cross-party group led by Jeremy Corbyn has vowed to work together to stop a No Deal Brexit.

After talks with other parties yesterday, Mr Corbyn said he would pursue legislation to block No Deal, rather than calling a vote of no confidence. However, there are still divisions among Remainers.

To pass such legislation, opposition MPs would have to take control of Commons business, which is usually tightly controlled by the Government.

That is an unusual step, but it has happened before and Parliamentary rules have proven flexible in recent months.

In April, rebel MPs succeeded in passing the so-called Cooper-Letwin Bill to force Theresa May to seek an extension. EU leaders granted a delay until October 31.

The Commons has also voted in general terms to express its opposition to No Deal, and could do so again. Such votes put political pressure on the Government but have no binding legal force.

What if they succeed?

The Commons could pass a law forcing Boris Johnson to ask EU leaders for a further extension to Brexit.

However, that would not guarantee a delay, as the EU would have to agree to it and Brussels has signalled reluctance to postpone the process any further.

Mr Johnson could call a General Election in an effort to change the Parliamentary numbers in his favour. But there may not be time for that before October 31.

Could there be a vote of no confidence?

Labour’s Jeremy Corbyn has long wanted to bring the Government down with a no-confidence vote in Parliament.

He has tried once already this year, when Theresa May was still Prime Minister. The no-confidence motion was defeated by 325 votes to 306.

Yesterday he appeared to put those plans on the back-burner, but today’s developments could yet force a change of tactics.

A vote on the Queen’s Speech is also often interpreted as a proxy vote of confidence.

What if Boris Johnson wins the confidence vote?

If Mr Johnson wins the confidence vote he is safe for now but in theory there is no limit on the number of times a vote can be called.

He still hopes to secure a new Brexit deal from the EU and eliminate the Irish backstop.

What if Boris Johnson loses the confidence vote?

If Mr Corbyn wins the vote, there will be fierce disagreement about what happens next.

Mr Johnson may well try to stay in Number 10 and call a General Election instead of resigning.

Mr Corbyn believes he should be appointed as caretaker PM, saying he would delay Brexit to avoid No Deal.  However, others fear that Mr Corbyn is too toxic and have proposed alternative candidates as interim PM.

Europhile Tory grandee Ken Clarke and Labour stalwart Harriet Harman have been among the names mentioned.

Either way, it would probably result in a General Election which would make today’s prorogation irrelevant. That election would take place 25 days after the current Parliament is dissolved.

As a result, a successful no-confidence motion in the next two weeks could force an Election extremely close to the Brexit date. 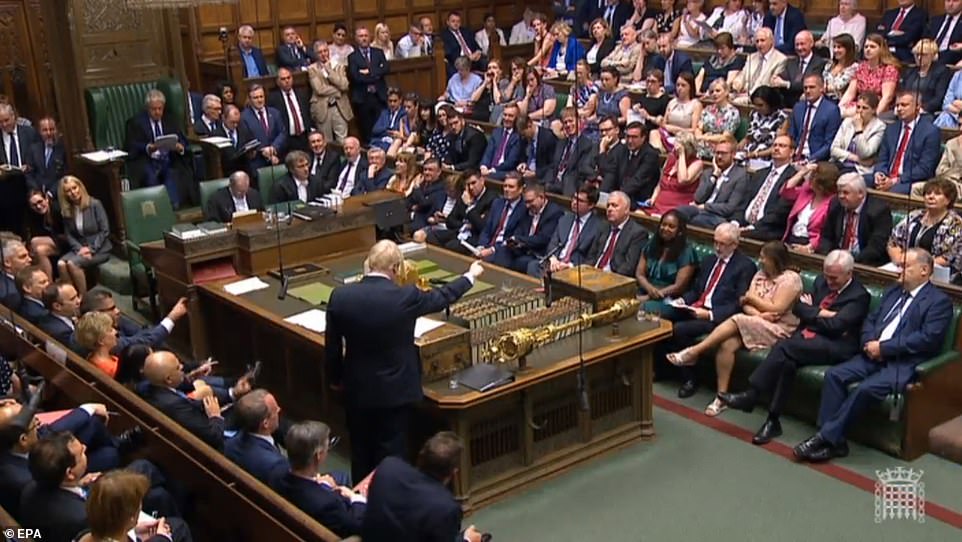 What does the Government want to do?

Mr Johnson and his allies are insisting that today’s announcement is a standard, purely procedural step and deny they are playing constitutional tricks to get Brexit over the line.

They point out that the current session of Parliament, which has been running since 2017, has been the longest in British history.

The PM said today that he wanted to begin a new legislative agenda on domestic issues unrelated to Brexit.

He has said repeatedly that Britain will leave the EU on October 31 with or without a deal. A crucial summit will take place on October 17 and 18. 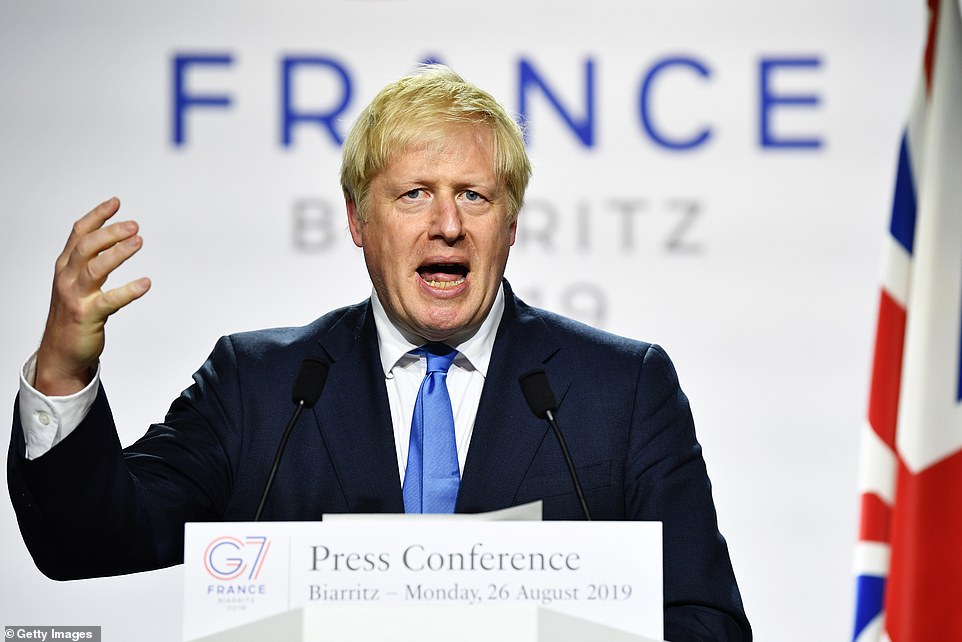 Boris Johnson (pictured) is set to ask the Queen to suspend Parliament just weeks before Brexit, in a move which may prevent MPs blocking a No Deal Brexit

Speculation of a snap election has been swirling since Mr Johnson entered Number 10, prompting an uptick in the Conservatives’ poll numbers.

It intensified this week when Chancellor Sajid Javid’s spending announcement was brought forward to next week.

Mr Johnson could seek an election after Brexit is complete. Alternatively, if he is thwarted by MPs, he could call what has been described as a ‘people versus Parliament’ election to win a mandate to deliver Brexit.

Under the Fixed-Term Parliaments Act, the next election is not due until 2022, but MPs can vote for an early election by a two-thirds majority.

The PM may also be forced into an election if there is a successful vote of no confidence.

Nigel Farage has said that his Brexit Party could ally with the Tories if Mr Johnson pursues No Deal.

However, he has threatened to set his 635 candidates on the Conservatives at a general election if the PM does not deliver Brexit or pursues a version of Theresa May’s withdrawal agreement.