Captured over 26 hours between the announcement of the Tory leadership result to Boris’s return to Number 10 after meeting the Queen on Wednesday, they provide a glimpse into the furious work which went into crafting his speech and a moment of light-hearted relief after becoming Prime Minister.

Photographer Andrew Parsons has worked closely with Boris Johnson for the past 11 years, having been introduced to the new Prime Minister by his predecessor David Cameron, for whom Mr Parsons worked as a staff photographer.

It was Parsons who captured images of Johnson firing an AK-47 in Iraq, and of the moment he inadvertently flattened a Japanese schoolboy during a game of what was supposed to be touch rugby.

But this week he had his camera trained on a more businesslike Mr Johnson, at Conservative campaign headquarters and then in Downing Street, as he worked with aides to thrash out his first message to the public having achieved his lifelong ambition.

‘I’ve recorded quite a few high-pressure moments’, Mr Parsons told The Sunday Times, and added he hopes to continue working with the Prime Minister to immortalise more iconic occasions in future.

‘I think I’m quite good at blending in’, he said.

Beneath a huge portrait of Margaret Thatcher at Conservative campaign headquarters, Boris Johnson discusses his next move after winning the party leadership. Mr Johnson is pictured with Ed Lister, who is the chair of Homes England, the government’s housing accelerator, at the offices in Westminster 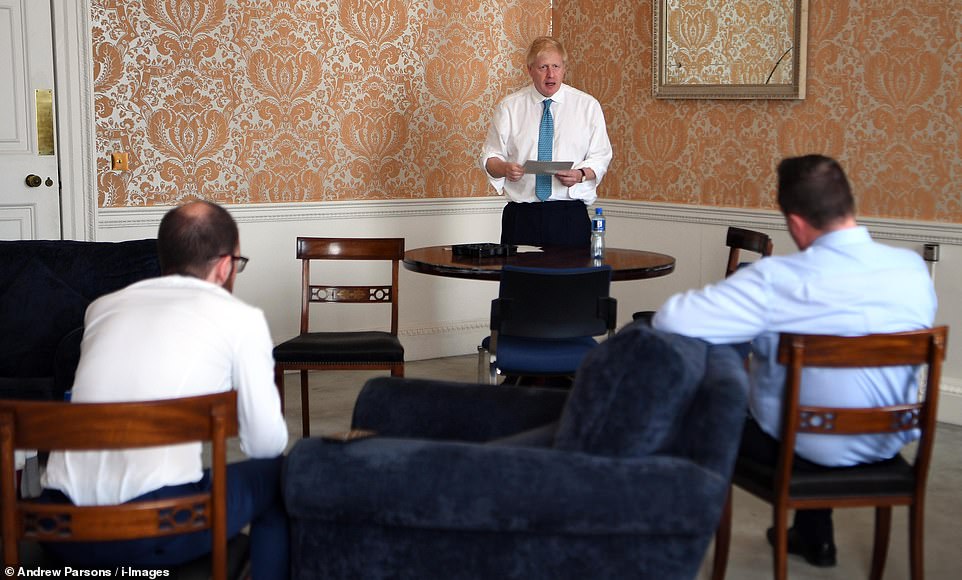 In this snap, Mr Johnson is seen practicing his speech to the nation in his temporary office inside Admiralty House, London, minutes before seeing the Queen before heading to Number 10 Downing Street as Britain’s new Prime Minister. He went over his speech with Will Walden, his former media aide while on the Vote Leave campaign trail in 2016. Mr Walden was also previously director of communications at City Hall under Mr Johnson 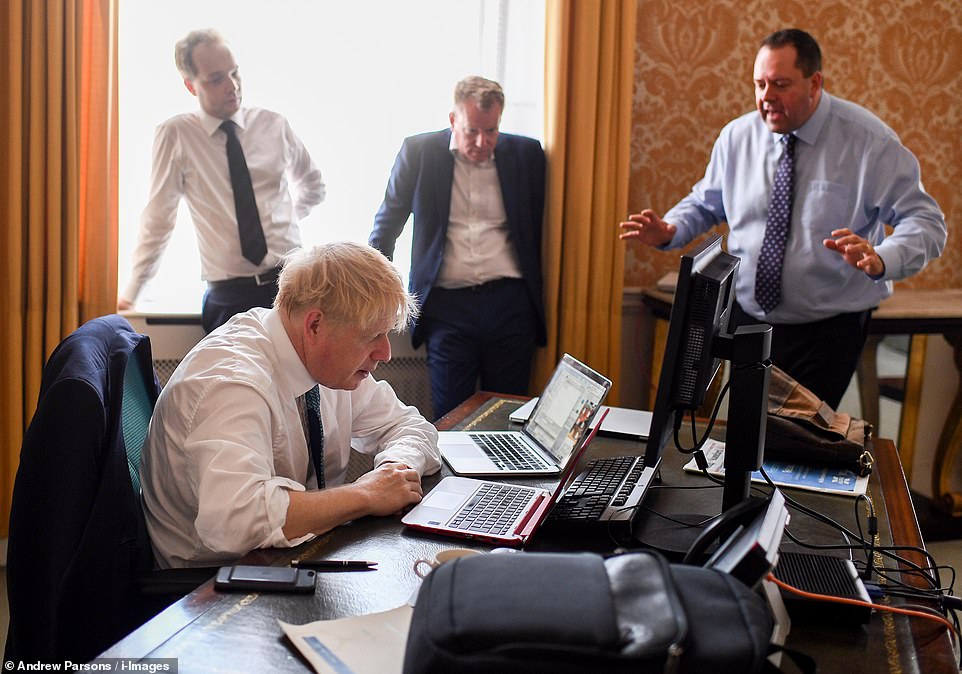 Two laptops, a desktop computer and his phone are splayed out in front of the PM as he thrashes out the text for his first speech as prime minister with several aides inside Admiralty House. The eye-opening pictures were taken by Andrew Parsons who has worked closely with the former Mayor of London over the past 11 years 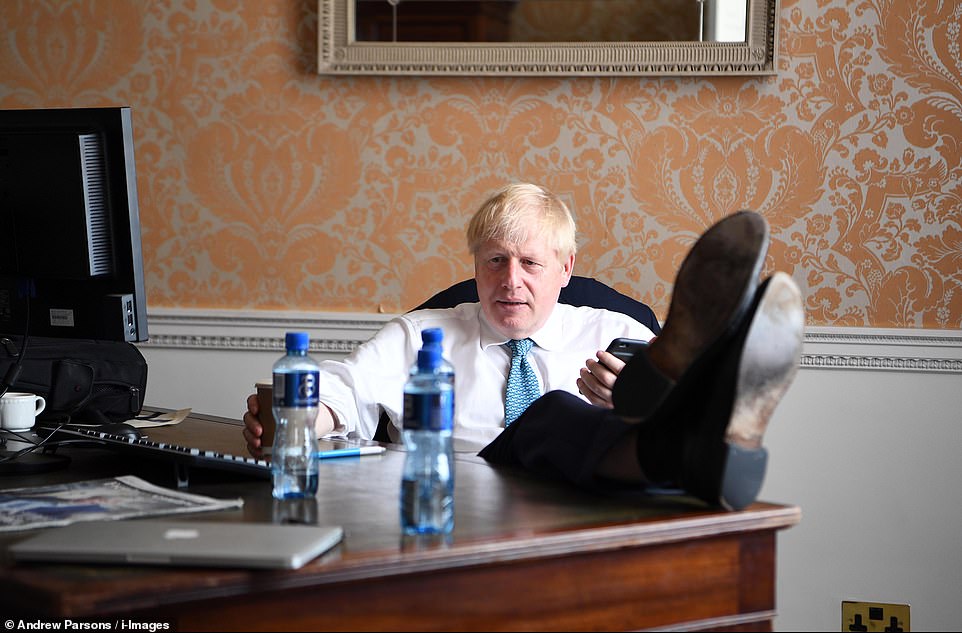 Putting his feet up: My Johnson makes a call on speakerphone with a number of water bottles in front of him before meeting the Queen on Wednesday, having spent the day working on his speech 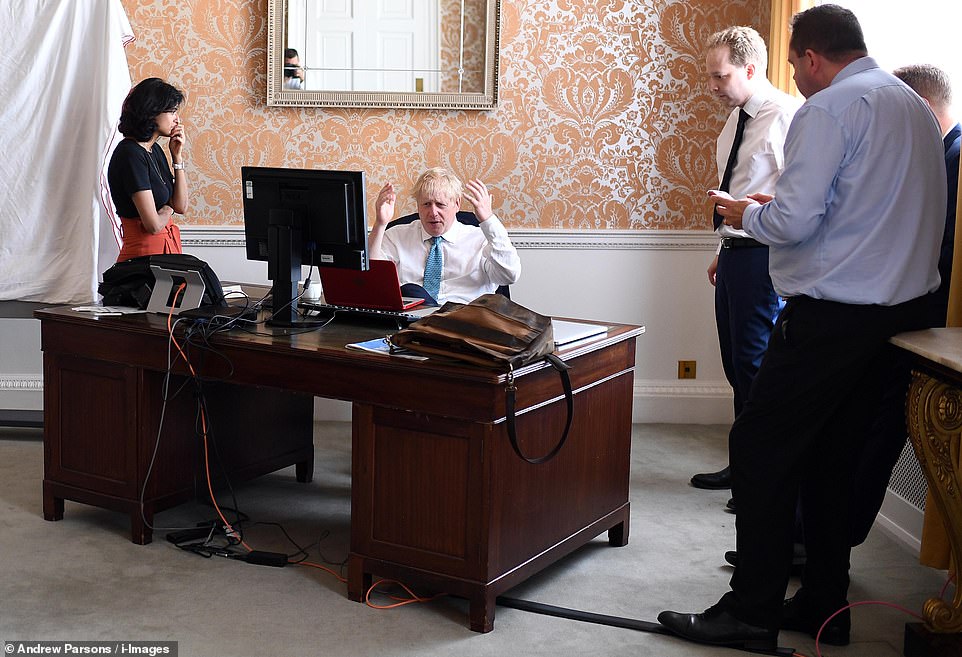 A glimpse of Boris’s longtime photographer Andrew Parsons can be seen in the mirror as Mr Johnson works with his City Hall deputy Munira Mirza, now head of the Number 10 policy unit, on the speech, along with Mr Walden and several other aides 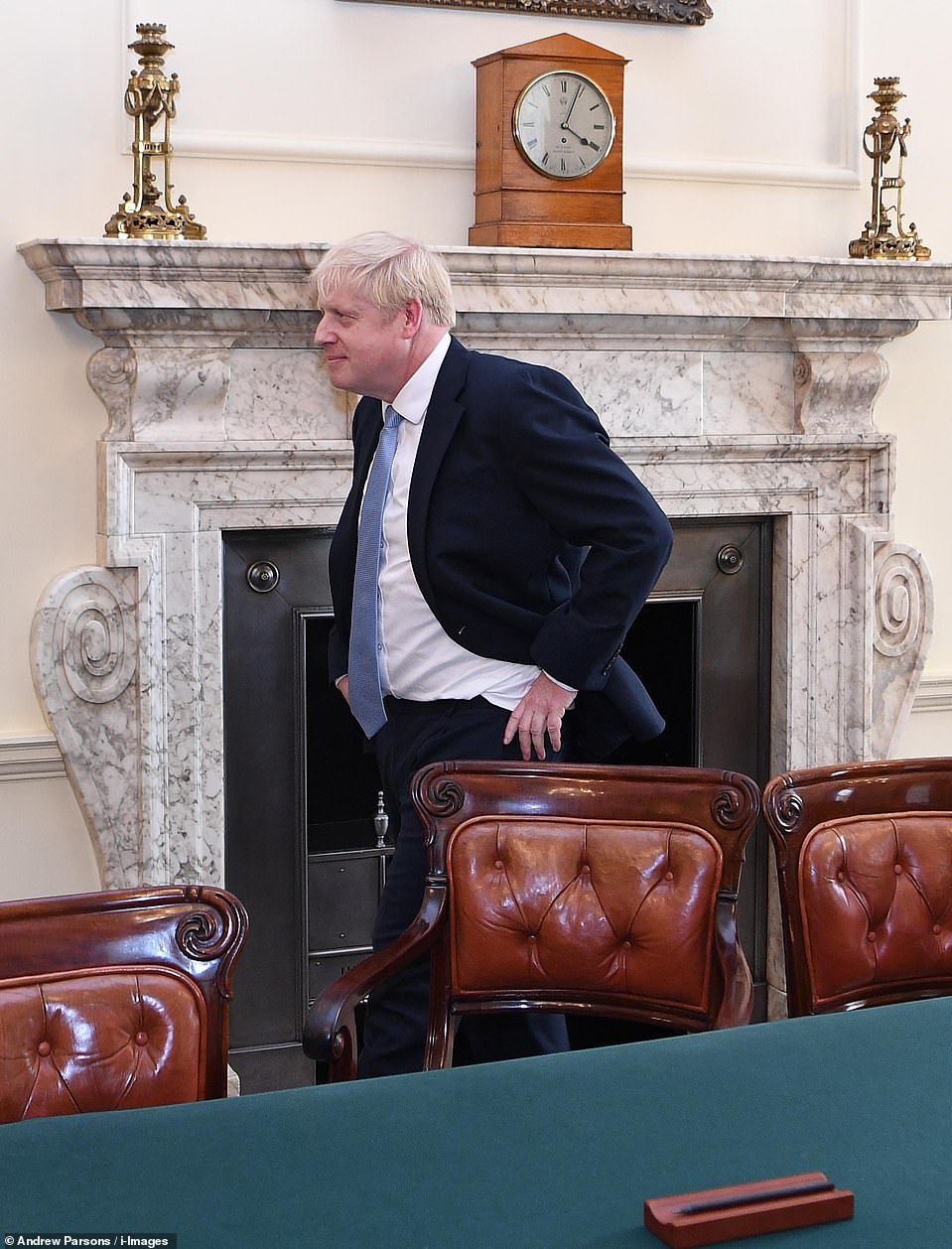 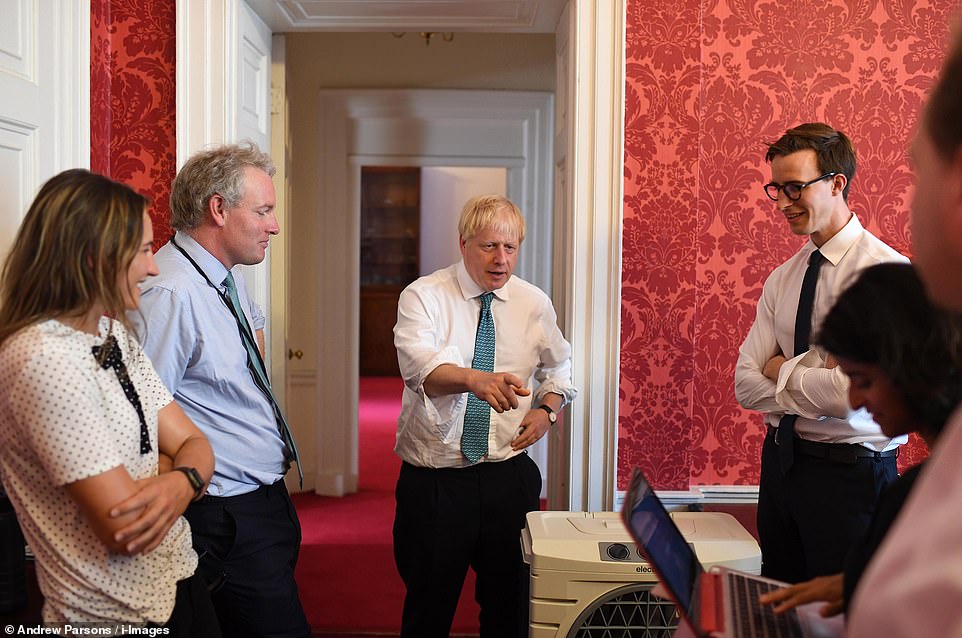 In this picture, Mr Johnson can be seen talking to his new special advisers in his temporary office in Admiralty House before heading off to see the Queen on Wednesday. ‘I’ve recorded quite a few high-pressure moments’, Mr Parsons told The Sunday Times, and added he hopes to continue working with the Prime Minister to immortalise more iconic occasions in future 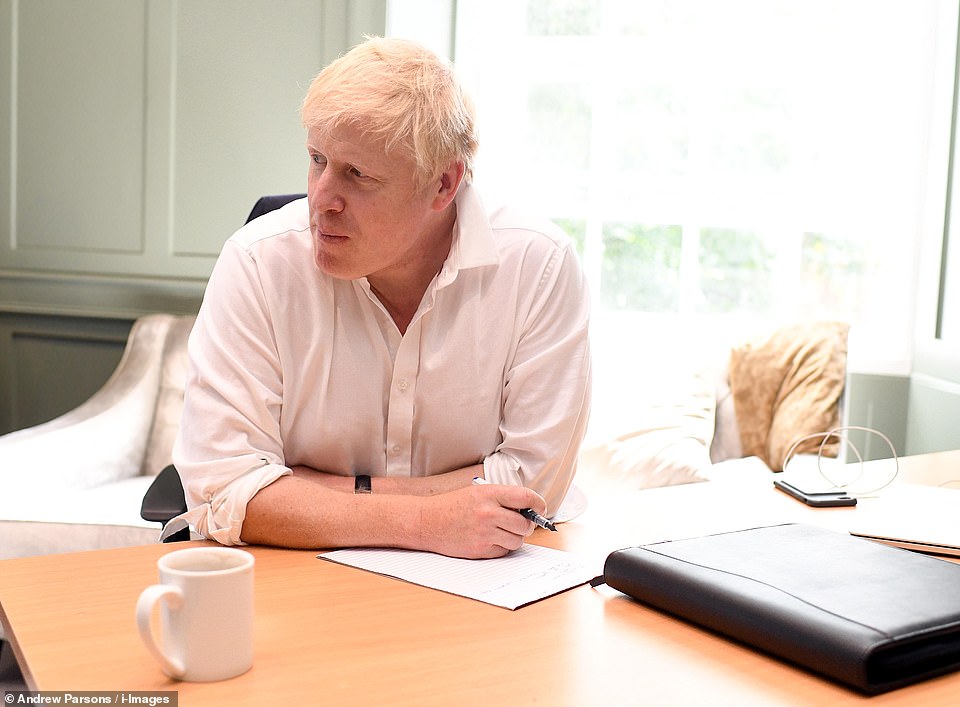 Starting with a blank sheet of paper: Fountain pen in hand, coffee on hand, and tie off, Mr Johnson is seen working on the text of his address with his sleeves rolled up in Admiralty House. Mr Parsons was introduced to Mr Johnson by former Prime Minister David Cameron 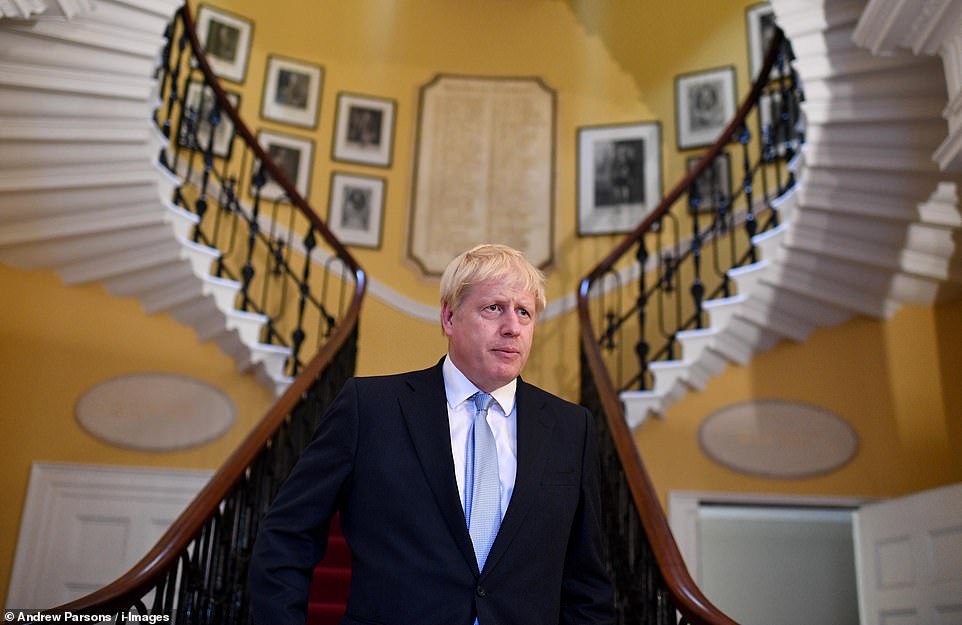 The grand central staircase of Admiralty House flares over Mr Johnson’s shoulder as he prepares to leave to meet the Queen on Wednesday, having beat Jeremy Hunt for the position 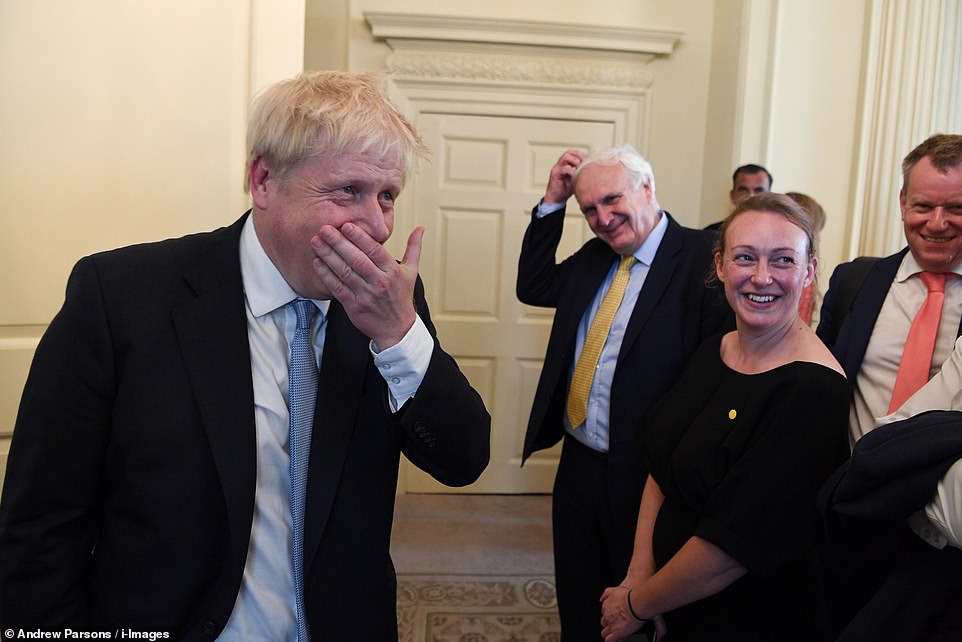