Boris Johnson’s plans to cuts taxes for the rich would cost £9bn and would only benefit the top 10% of earners, analysis reveals

Plans floated by Boris Johnson to give a tax cut to people on more than £50,000 would cost around £9 billion and mainly benefit the top 10% of earners, according to new analysis.

The Institute for Fiscal Studies (IFS), a respected economic think tank, said it was ‘not clear’ that spending so much on tax cuts would be compatible with both ending austerity in public spending and the ‘prudent management of the public finances’.

Former foreign secretary Mr Johnson has said he wants a ‘debate’ about raising the threshold at which people start paying 40% tax from its current level of £50,000 to £80,000.

Mr Johnson (pictured at hustings in Birmingham on Saturday) has said he wants a ‘debate’ about raising the threshold at which people start paying 40% tax from its current level of £50,000 to £80,000

The IFS analysis suggested that around 3.2 million workers would gain from raising the higher-rate tax threshold along with 0.4 million pensioners.

Around three-quarters of the gains would go to those in the top 10% of earners, the IFS said.

While only about 8% of individuals would gain in the short-run, over time a ‘considerably larger’ number would benefit at some point in their lives, either directly or because they are in a household with a higher earner, due to income variations over the course of a working career.

Mr Johnson has also suggested increasing the amount people can earn without paying National Insurance contributions (NICs) to provide a tax cut to the lower paid.

The would-be premier has not said how much he would like to raise the threshold by – currently earnings over £8,632 are subject to NICs – but the IFS said raising it by £1,000 would take 600,000 workers out of NICs and cost around £3 billion a year.

IFS research economist Tom Waters, one of the authors of the analysis, said: ‘These are expensive pledges to cut tax.

‘Raising the higher rate threshold as far as £80,000 would be a radical change benefiting high-income households only, though it is important to be aware that the numbers paying higher rate tax have crept up over time, largely unannounced.

‘There are now more than four million higher-rate taxpayers compared with 1.5 million 30 years ago.

‘Raising the floor for NICs helps low earners, though raising tax credits would be much more effective and better targeted if that were the key aim.

‘These pledges between them will cost many billions of pounds.

‘It is not clear that spending such sums on tax cuts is compatible with both ending austerity in public spending and prudent management of the public finances.’ 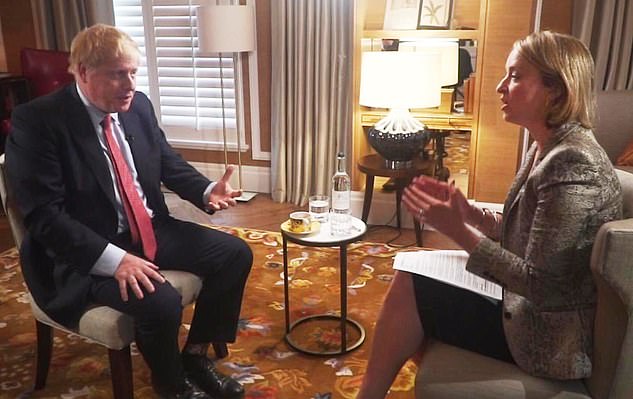 Mr Johnson has previously insisted that his tax policies are ‘sensible’.

‘It does seem to be very odd that in the Conservative Party people should seriously question whether it is right to try to lift nurses and heads of maths departments and police inspectors out of the top rate of tax,’ he said during the BBC debate earlier this month.

‘What we would bring forward is a package to help, primarily, the poorest in society by lifting the thresholds for National Insurance but I think it’s very sensible to have an ambition to raise the higher rate of tax for middle-income earners.’

A spokeswoman for Mr Johnson said: ‘Boris has, throughout his career, been a champion of helping the lowest paid – as mayor he rolled out the London Living Wage, benefiting tens of thousands of Londoners.

‘If he is elected leader and prime minister, Boris will continue to focus on reducing the tax burden for working families.

‘He has started to set out some detailed proposals and will outline more of his tax package in due course.

‘It is wrong that so many people who are not rich, and hold jobs like heads of departments in schools or police inspectors, are forced to pay tax at 40% – Boris’ proposals will fix this.’