Who could have guessed that Boris Johnson’s brave and correct decision to prorogue Parliament for four weeks would serve up so many rich and enjoyable ironies for the British people? What pleasure he has inadvertently given us.

There is Shadow Chancellor John McDonnell denouncing him for acting like a Second World War dictator when Joseph Stalin has long been one of McDonnell’s personal heroes.

The hard-Left Labour movement Momentum has promised to unleash chaos by blocking bridges and motorways. Their aim? To stop ‘the chaos’ of a No Deal Brexit.

It is not just the dedicated Left engaging in such hysteria.

We have had Hugh Grant trying to pretend that his children’s future will be affected more by Brexit than by the estimated £65.5 million he has (quite properly and commendably) amassed as an actor.

Meanwhile, the supposedly politically neutral Speaker of the House of Commons, John Bercow, has been speaking of the constitutional ‘outrage’ of prorogation and that he will fight it ‘with every bone in my body’. It turns out, of course, that his own officials – who know far more about the constitution than he ever will – have told him repeatedly that it is he who is proposing to act unconstitutionally.

But perhaps the most ridiculous claims of all have been made by fellow historians, people who really ought to know better.

They include Sir Richard Evans, formerly Regius professor of History at Cambridge, who has done his best in the past few days to prove the saying that there is no one so stupid as an intellectual.

He drew on the analogy of Adolf Hitler and the Reichstag fire – the Nazi arson attack which closed Germany’s parliament in Berlin in 1933, a month after Hitler was sworn in as Chancellor.

Sir Richard did not mention, however, that Boris is allowing debates and votes aplenty in a rather un-Hitlerian manner when Parliament returns in October.

One wonders what language people like Evans would use if there were ever a genuine threat of a fascist takeover in this country. They have drained the political lexicon dry.

If this prorogation is really the coup d’etat that the celebrities, arch-Remainers and luvvies are so dramatically denouncing, do they not think that Boris would simply have extended it a fortnight until after October 31 once we had officially left the EU? So caught up in their own hysteria, this point seems lost on them.

Instead we have the exquisite hypocrisy of Sir John Major threatening to go to court to declare illegal something that he himself did to get out of a political fix in both 1992 and in 1997, and of Corbyn denouncing as an outrage something that Clement Attlee did for a similar reason in 1948.

Another great irony is that the people who are bleating loudest about the so-called affront to the ancient powers of Parliament are precisely the same people who want to hand over those powers to the EU, allowing the laws passed by our Parliament to be overruled by the European Court of Justice.

Hugh Grant (right) launched an expletive-laden attack at Boris Johnson in which he called the Prime Minister an ‘over-promoted rubber bath toy’. Speaker of the House of Commons, John Bercow (left) branded the Prime Minister’s decision to prorogue Parliament a ‘constitutional outrage’

The very people suspending Parliament for little over a month are doing so because they want Parliament’s power to be returned to it in perpetuity.

It is the people who have been sovereign in this country since the mid-17th Century, as almost every political philosopher has agreed since the days of John Locke and David Hume. We fought the Civil War to establish that very principle, overturning the divine right of kings. When it is clearly articulated, the will of the people trumps that of Parliament and the Crown. And in the referendum in June 2016, the people’s voice was clear. 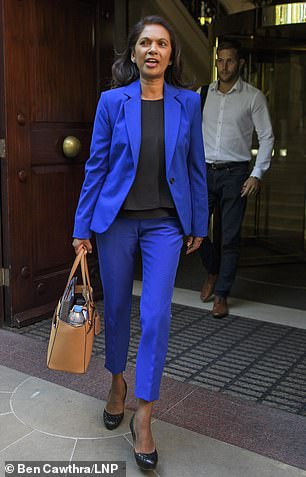 ‘What sort of democracy is it if Remain campaigner Gina Miller (pictured) can somehow manage to persuade the courts to block Brexit?’ writes Andrew Roberts

At the heart of all these ironies and hypocrisies, of course, is the monstrous one about democracy.

How dare the Remainer opponents of prorogation denounce this as an anti-democratic measure when all they have done over the past three years is work ceaselessly and tirelessly to subvert the will of the people?

John Bercow has called the prorogation an ‘offence against the democratic process’, but the real offence has been the past three years of rearguard actions.

What sort of democracy is it if Remain campaigner Gina Miller can somehow manage to persuade the courts to block Brexit? Is it democratic to allow unelected judges to stymie the will of the people?

Should that happen, the judiciary will have been seen to assume powers that properly and historically belong to the executive, something that the great constitutional expert and Reith lecturer Lord (Jonathan) Sumption, himself a Remainer, has rightly condemned.

The Remainers are at no risk of being gunned down in their thousands like the pro-democracy demonstrators who face a tyrannous Chinese communist regime. It is a despicable mockery of the Hong Kongers’ sublime bravery to try to co-opt their symbol, and yet another example of Remainers’ hyperbole.

So thank you, Boris, for giving us such an enjoyable few days.

There has been more than a trace of Margaret Thatcher about you. Last week you acted with the same kind of resolve that she showed during the miners’ strike and the Falklands War. Whoever said that you were too desperate to be liked to be an effective Prime Minister could not have been more wrong.

You clearly have just that level of steeliness that Thatcher showed in the great foreign or domestic crises of our country.