HENRY DEEDES: Cross? The outraged reaction to the Prime Minister’s gutsy strategy meant that you could hear the twisted knicker elastic twanging all down Whitehall

An affront to democracy! Dis-grace! An abom-in-ayassshunn! Outrage. Everywhere you looked in Westminster yesterday there it was, flowing through the streets like bubbling hot magma.

Boris Johnson’s decision to suspend Parliament in the second week of September ahead of the Queen’s Speech – thus shortening the amount of time MPs have to stop a No Deal Brexit – was a gutsy piece of constitutional chicanery that will have rattled crockery over in Brussels.

It also had the added bonus of working shrieky Remainers into a soapy lather of righteous indignation. ‘How dare he bend parliamentary procedure to suit his own ends!’, they yelled. ‘That’s our trick!’

Cross? You could almost hear the sound of twisted knicker elastic twanging all the way down Whitehall. No sooner had news of the Prime Minister’s intentions broken just before 9am than media outlets fizzed with fury and hyperbolic rage.

Words like ‘despot’ and ‘tin-pot dictator’ were used. ‘A dark day for democracy’ was another phrase bandied around. This from the same bunch of EU enthusiasts who two weeks ago wanted to install Ken Clarke as prime minister. Dominic Grieve could hardly have finished applying his hair oil in front of the bathroom mirror before he was on the blower to BBC 5 Live. ‘Outrageous,’ was the cadaverous QC’s verdict on the PM’s tactics. ‘There will be a vote of no confidence and his government will come down.’

Over on Sky News, Change UK leader Anna Soubry was blowing a gasket. She was doing her interview via webcam, never a wise move. They’d make even Grace Kelly at her scrummiest look ropey. Staring into the lens inquisitively, poor Soubers resembled a door-to-door salesman peering into a peephole.

Liberal Democrat leader Jo Swinson was predictably foaming. ‘An outrageous power grab,’ she said. Outrage, it seems, is priggish Ms Swinson’s default setting. It doesn’t take much to get that implacable Scottish lilt of hers quivering. In her student days, she probably suggested walk-outs if the union lavs began dispensing a new brand of soap. 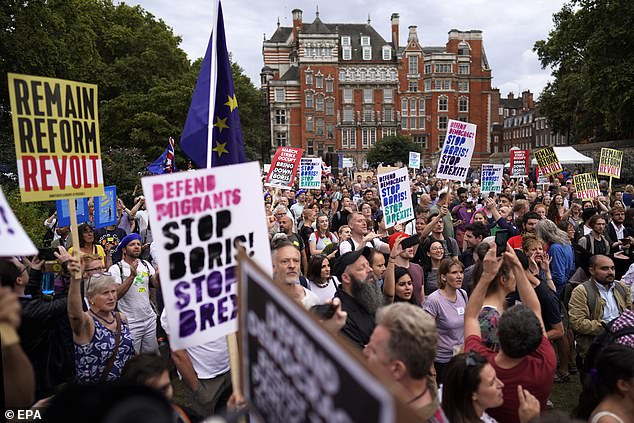 Protesters were outside the Houses of Parliament in Westminster, London, yesterday in retaliation to the UK government’s suspension of Parliament – a move which could shorten the amount of time MPs have to block a No-Deal Brexit 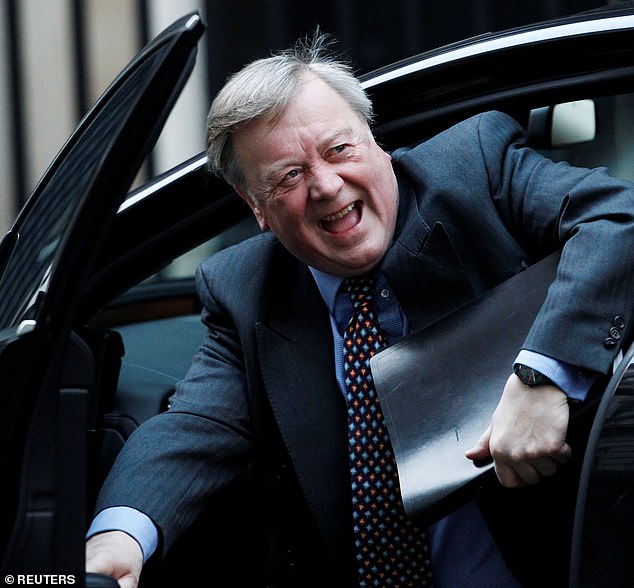 The same people who called Boris Johnson a ‘tin-pot dictator’ were however the same who wanted to install Ken Clarke as Prime Minister two weeks ago. He said he ‘would not rule out’ the possibility of being a care-taker PM a few days ago 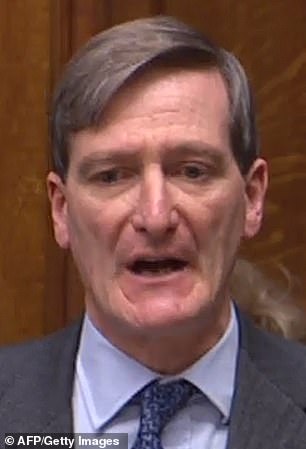 Dominic Grieve was an embarrassment who could hardly finish applying his hair oil in front of the bathroom mirror before he was on the blower to BBC 5 Live. He says MPs are prepared to back a no-confidence motion in Boris

‘A smash and grab on democracy,’ said Jeremy Corbyn, so slow off the mark to react his comments hardly registered.

Former head of the Civil Service Lord Kerslake, in the morose tone of a man who’d just said a last goodbye to the family spaniel, declared it a ‘bad day’. Quelle surprise – the Sir Humphreys loathe bold thinking of any sort from government.

Meanwhile, outside Parliament, an ‘emergency protest’ was being hosted by Owen Jones, a publicity-prone Corbynite agitator, and the saturnine creatures from Momentum. A few thousand people flocked into College Green, the area usually reserved for TV cameras. People spewed into the streets while police held things up.

The pro-EU circus folk who hang out in these parts all day were there, of course. And various other stragglers, some who had simply popped over for a look-in on their way home.

I spotted lustrously-maned intellectual AC Grayling, who couldn’t have looked less comfortable among the gathered oddballs if he were wearing a goatskin sweater. ‘This is an unconscionable and absolutely unspeakable insult to Parliament and our parliamentary democracy,’ he fumed.

There were bawdy signs, witless banners, chants of ‘Stop the Coup’. At one point, a bus full of Japanese tourists cruised past, its occupants looking out as though they were witnessing some of sort of bizarre ceremony of a religious cult.

I struggled to hear what any of the speakers were saying. The PA system was so scratchy it sounded as though it fallen off the back of an old Radio Rentals van circa 1985. At 6.30pm, the sun began to make its languid descent behind Westminster Abbey. Autumn may be around the corner but things are certainly heating up again in Westminster. 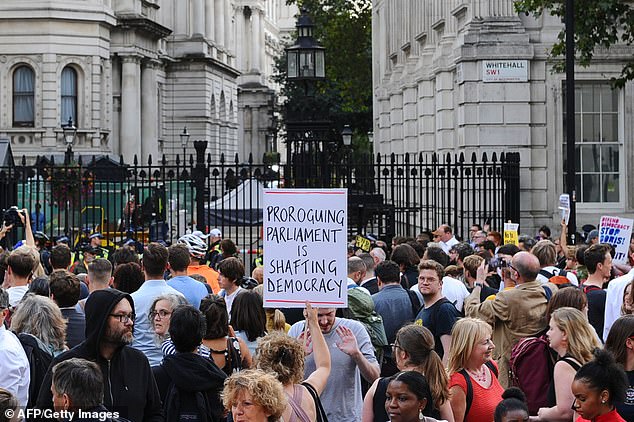