By James Salmon Associate City Editor For The Daily Mail

It warned the giveaway ‘risks putting the public finances on an unsustainable path’, given the risk of leaving the EU without a deal. Echoing criticism made by opposition parties, the think-tank also concluded most of the tax cuts would go to those on higher incomes.

The intervention will heap pressure on Mr Johnson to water down the tax-cutting commitment he made during the Tory leadership campaign, which he is gambling on to be a big vote winner when a general election is called.

Mr Johnson pledged to raise the threshold for paying higher rate income tax in England, Wales and Northern Ireland from £50,000 to £80,000.

He said he wanted to help the ‘huge numbers’ of middle income households which have been dragged into paying the 40 per cent higher rate of tax. The number of people paying higher rate tax has more than doubled from 1.6million in 1990 to 3.8million.

In its report, the IFS said the PM’s proposed tax cut would cost the Treasury up to £9billion a year if introduced immediately and would take 2.5million people out of paying 40 per cent higher rate tax.

It described it as a ‘substantial and expensive tax cut from which only those on high incomes would gain’. 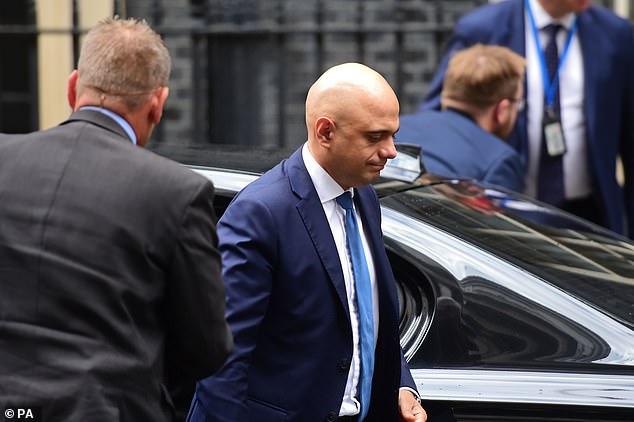 A Treasury spokesman said: ‘Any decisions would be for the Chancellor to take.’ Pictured is Sajid Javid

Mr Johnson has also outlined plans to raise the point at which National Insurance kicks in, currently set at £8,632.

The IFS calculated that every £1,000 rise in the threshold would cost £4billion if they were increased in tandem. Increasing all the thresholds to £12,500 in line with the personal allowance for income tax would cost £17billion a year, it warned.

The report said only 3 per cent of gains would go to the poorest 20 per cent of households as so many do not earn enough to pay national insurance, or are unemployed.

The IFS stressed the annual bill for Mr Johnson’s tax cuts could range between £10billion and £20billion, if the tax cuts are phased in more gradually.

A Treasury spokesman said: ‘Any decisions would be for the Chancellor to take.’