Boris orders the EU to step up tempo on Brexit

Boris Johnson last night ordered officials to ‘step up the tempo’ of talks with Brussels, amid rising hopes of a Brexit breakthrough.

After a summer with few formal negotiations, British officials will now hold talks with their EU counterparts twice a week throughout September, with the option of further meetings if progress is made.

After Mr Johnson became Prime Minister in July, Downing Street said he would not engage in negotiations unless the EU agreed to drop its insistence that any deal must include the controversial Irish backstop.

Following ‘encouraging’ talks in recent week with EU leaders, Johnson plans to push up the rate of meetings to discuss Brexit. Above, German Chancellor Angela Merkel, talks to President of the European Council Donald Tusk, and Britain’s Prime Minister Boris Johnson at the G7 summit, in Biarritz

But, following ‘encouraging’ talks in recent weeks with Angela Merkel, Emmanuel Macron and Donald Tusk, the Prime Minister said he believed it was time to intensify negotiations.

‘We are ready to work in an energetic and determined way to get a deal done,’ Mr Johnson said yesterday.

‘While I have been encouraged with my discussions with EU leaders that there is a willingness to talk about alternatives to the backstop, it is now time for both sides to step up the tempo. The increase in meetings and discussions is necessary if we are to have a chance of agreeing a deal for when we leave on October 31, no ifs no buts.’ 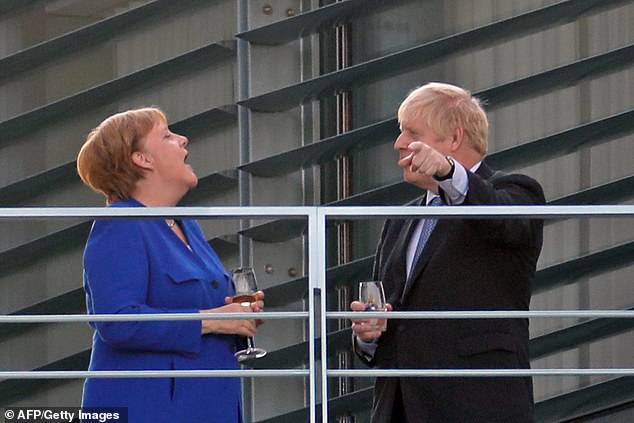 German Chancellor Angela Merkel and British Prime Minister Boris Johnson have a drink on the terrace at the Chancellery on his first foreign visit since taking office on August 21, 2019 in Berlin. Johnson’s decision to step up negotiations will be seen as an attempt to persuade wavering MPs not to join rebel efforts next week

His decision to step up negotiations will be seen as an attempt to persuade wavering MPs not to join rebel efforts next week aimed at forcing him to seek a further Brexit delay. However, government sources insisted there was growing optimism that a last-minute deal could be possible at a crunch EU summit in October, days after Parliament resumes.

One source said that although the two sides remained ‘some distance apart on key issues’ – notably the backstop – there were signs that both sides were ‘willing to work hard to find a way through’.

The development follows ‘positive’ talks between Mr Johnson’s EU adviser, David Frost, and EU officials this week. A note circulated among EU officials after the meeting said Mr Frost had ‘stressed very strongly that the new Prime Minister was seeking a deal… but that he was not frightened of No Deal’. 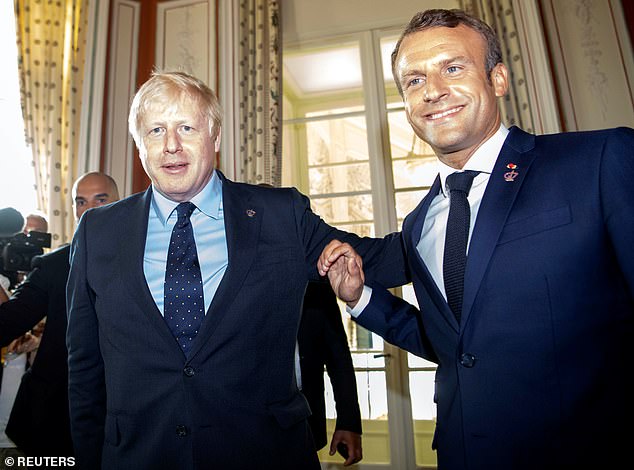 Johnson’s EU adviser, David Frost, will be returning to Brussels twice a week to agree ‘alternative arrangements’ for keeping open the Irish border without the need for a backstop

Mr Frost will return to Brussels twice a week, starting next week, to agree ‘alternative arrangements’ for keeping open the Irish border without the need for the backstop, which critics say would lock the UK into a customs union.

He insisted progress depended on making clear that the UK would leave on October 31 regardless. Ministers were also told it would make a ‘huge difference’ to negotiations if the threat of MPs blocking No Deal was finally lifted.