Boris Johnson bullishly promised tonight he would enter talks with EU leaders ‘with a lot of oomph’ as differences between the UK and EU’s position over the Withdrawal Agreement remain.

Boris Johnson is due to meet German Chancellor Angela Merkel in Berlin on Wednesday before meeting French President Emmanuel Macron in Paris on Thursday.

Speaking to reporters, Mr Johnson reiterated his opposition to the Northern Irish backstop, adding: ‘Don’t forget why we’re doing all of this. The existing agreement just doesn’t work for the UK. And Parliament has thrown it out three times.

‘We can’t have this backstop. So I’m going to go to see our friends and partners – I’m going off to Germany and then to France, and then to see the G7 at Biarritz, and I’m going to make the point that the backstop is going to come out.’

He added: ‘I’m going to go at it very very – with a lot of oomph, as you would expect.’

On Monday, Mr Johnson wrote to European Council president Donald Tusk and said that the backstop – the contingency plan to avoid a hard border with Ireland – should be removed from the divorce deal ahead of the October 31 Brexit deadline.

But Mr Tusk defended the measure and warned that scrapping it risked a return to a hard border on the island of Ireland.

Downing Street said that unless the backstop is abolished ‘there is no prospect of a deal’.

Mr Tusk said: ‘The backstop is an insurance to avoid a hard border on the island of Ireland unless and until an alternative is found.

‘Those against the backstop and not proposing realistic alternatives in fact support re-establishing a border. Even if they do not admit it.’

Responding, Mr Johnson said: ‘We think there is a big opportunity now for everybody to come together, take out that backstop.’

He added: ‘We will be looking at all the ways in which we can maintain frictionless trade at the Northern Irish border – whether it’s trusted trader schemes, or electronic pre-clearing, or whatever it happens to be, all that kind of thing, checks away from the border, points of sale or whatever if you have to crack down on smuggling, all that kind of thing – but we will come up with those solutions, or agree those solutions I should say, in the context of the free-trade agreement.

Donald Tusk, whose Brexit negotiator Guy Verhofstadt warned time was ‘fast running out’, shared this picture of himself relaxing in a hammock on Instagram 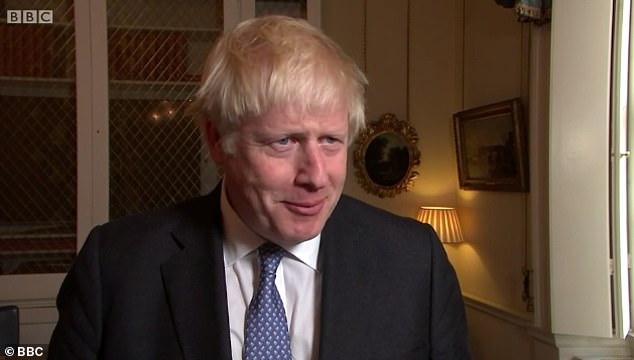 ‘That’s the way we are going to approach it. And you know what, at the moment it is absolutely true that our friends and partners are a bit negative.

‘I saw what Donald Tusk had to say and it wasn’t relevant of a sense of optimism. But I think actually we will get there.’

In an interview with ITV News, Mr Johnson said he believes there are ‘plenty of other creative solutions’ to the Northern Irish backstop.

He added: ‘I think it’s a bit paradoxical that the EU side is talking about us putting up all the barriers, we’ve made it clear 1,000 times we don’t want to see any checks on the Northern Irish frontier at all, under no circumstances let me repeat again, under no circumstances will the Govt of the United Kingdom be putting checks on the N Irish frontier.

‘I’m going to go of course and see if I can explore those ideas with our friends in Germany and France and at the G7 – let’s see where we get to. It may be that for now, they stick with the mantra, rien ne va plus, and they can’t change a jot or a tittle of the Withdrawal Agreement.’

Officials in Brussels privately accused Mr Johnson of making ‘incorrect’ and ‘misleading’ claims about the situation.

In public comments, the European Commission said the Prime Minister had failed to put forward a ‘legal, operational solution’ to the issue and had acknowledged that if one could be found it might not be ready in time.

In his letter, Mr Johnson said while he wants the UK to leave the EU with a deal, he could not support a Withdrawal Agreement that ‘locks the UK’ into a potentially indefinite customs union and applies single-market legislation in Northern Ireland.

As an alternative to the backstop, the Prime Minister said the UK would agree to a ‘legally binding commitment’ not to put in place infrastructure, checks or controls at the border with Ireland and would hope the EU did the same.

The backstop should be replaced with a commitment to put in place ‘alternative arrangements’, as far as possible before the end of the transition period, as part of the future relationship between the UK and EU.

But European Commission spokeswoman Natasha Bertaud said the letter ‘does not provide a legal, operational solution to prevent the return of a hard border on the island of Ireland’.

‘It does not set out what any alternative arrangements could be and in fact it recognises that there is no guarantee that such arrangements will be in place by the end of the transitional period,’ she said.

An official briefing note circulated among diplomats from the member states made clear the EU’s frustration with Mr Johnson’s approach.

The document, seen by the PA news agency, disputes Mr Johnson’s claims about the Good Friday Agreement and the Irish border.

It was ‘incorrect to state that the people of Northern Ireland have no influence over the legislation that would apply to them’ and ‘misleading’ to suggest that the two separate jurisdictions that exist on the island can be managed with an open border because that was only possible now due to the framework provided by EU law.

Any attempt to remove the ‘vital insurance policy’ of the backstop would also be rejected by MEPs, the European Parliament’s Brexit co-ordinator Guy Verhofstadt indicated.

‘The time for bluster & political blame games is fast running out,’ he added.