The frontrunner in the Tory leadership campaign called for a cross-party solution to the intractable problem.

He said: ‘We need to get everybody together to find a solution to this because it is a crisis in our country.’

Asked if someone should have to sell their homes to pay for dementia care, the leadership contender told the Express: ‘They should not. It is inequitable.

‘Some families having to raise hundreds of thousands in order to pay for the costs of care, others are getting those costs met, or at least part met.

‘There is a real sense of anxiety this is causing and we need to address it.’

Speaking of the damage the issue did during the last general election, when it arguably cost Mrs May her majority, he said: ‘We need to find new systems of meeting those costs, but do it in a way that has cross-party support because we saw how dangerously politicised this can become.

‘The more politicised this becomes, the less chance of a solution.’

Mr Johnson said that tackling the social care crisis will be one of his top priorities as prime minister.

Mr Johnson will take over a government in which social care policy has been kicked into the long grass for more than a decade.

Ministers have repeatedly delayed the publication of a long-awaited green paper on social care reform, which would set out plans to bring social care into the 21st Century.

The first pledge was made within months of Tony Blair’s premiership in 1997, in which the New Labour leader said he did not want ‘children brought up in a country where the only way pensioners can get long-term care is by selling their home’.

He started a Royal Commission, which recommended long-term personal care should be free-of-charge – but in January 2000, the Government rejected this. But devolved Scotland adopted the plans.

In July 2009, Labour vaunted a ‘National Care Service’ – which never emerged. It was to be funded by compulsory payments, which led the Tories to describe it as a ‘death tax’.

But then-PM Gordon Brown nixed the plans by delaying them for another five years – in which Labour lost the next election.

Earlier this month, Defence Secretary Penny Mordaunt admitted it was ‘fair criticism’ to say the Government had kept the public waiting too long for it to carry out its plans on social care.

‘People have been waiting for promises on care for a long time,’ she said.

The comment came after a report by the Lords economic affairs committee, chaired by former Cabinet minister Lord Forsyth.

It stated billions of pounds must be spent to restore quality and access in the social care system to an ‘acceptable’ standard.

Under the Coalition government, a study commissioned led by economist Sir Andrew Dilnot called for a cap on the amount people have to pay for care, proposing that the state step in to pay the rest. 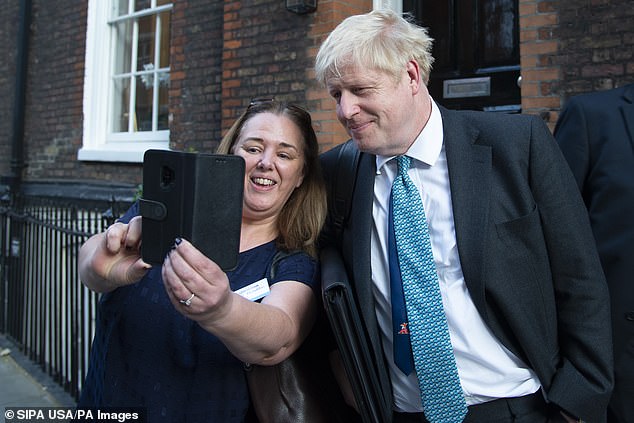 Seeing the bigger picture: Boris, seen in London yesterday, called the dementia care scandal a ‘crisis in our country’

And Theresa May faced a nationwide backlash during the 2017 election after her plans for social care were branded a ‘dementia tax’.

The party’s manifesto unveiled unpopular proposals ensuring no one has to sell their home to pay for care, and a pledge to protect the final £100,000 of pensioners’ assets.

But the blueprint also revealed that the she planned to use decades of rising property values as a way of funding social care.

The Manifesto bluntly stated that the elderly should not expect current and future taxpayers to pay for their care, adding: ‘Many older people have built considerable property assets due to rising property prices.’

In addition, thousands of people who rely on home helps would have been asked to contribute towards the cost of their care for the first time.

Jeremy Corbyn described the rise as a ‘tax on dementia’, saying it was unfair that cancer sufferers got free NHS care while those with dementia racked up huge bills.