Ansu Fati broke the record and Lionel Messi finally came back from injury, but Jadon Sancho outshone both of them as Borussia Dormund came within a missed penalty kick of beating Barcelona.

Marc Andre ter Stegen saved Marco Reus’ spot-kick. He was out to prove he should be Germany’s number one and was Barcelona’s best player on the night.

Sancho took that honour for the home side and he won the second half spot kick only to see Ter Stegen save Reus’ kick to ensure the game finished 0-0. 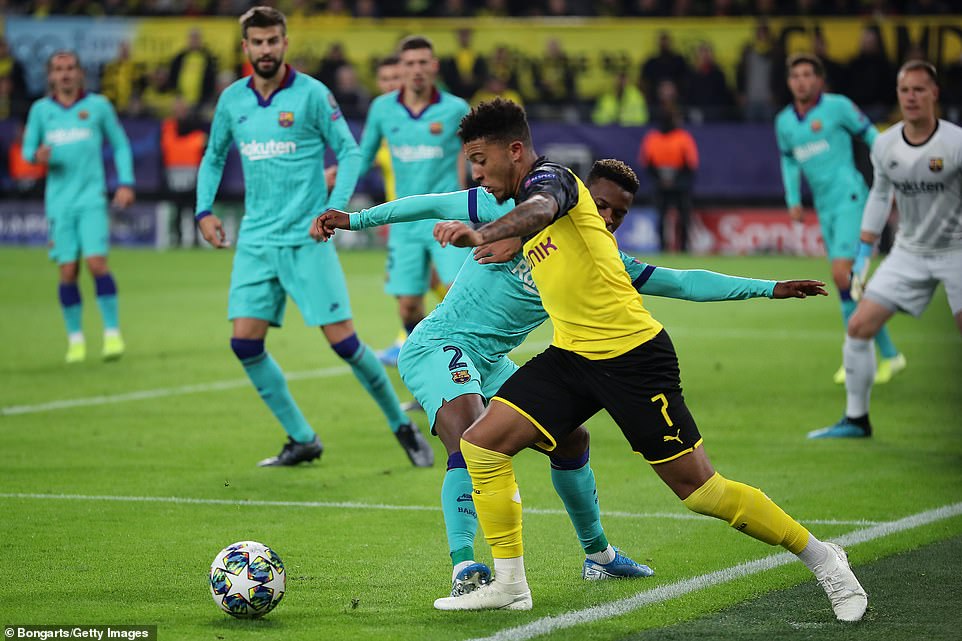 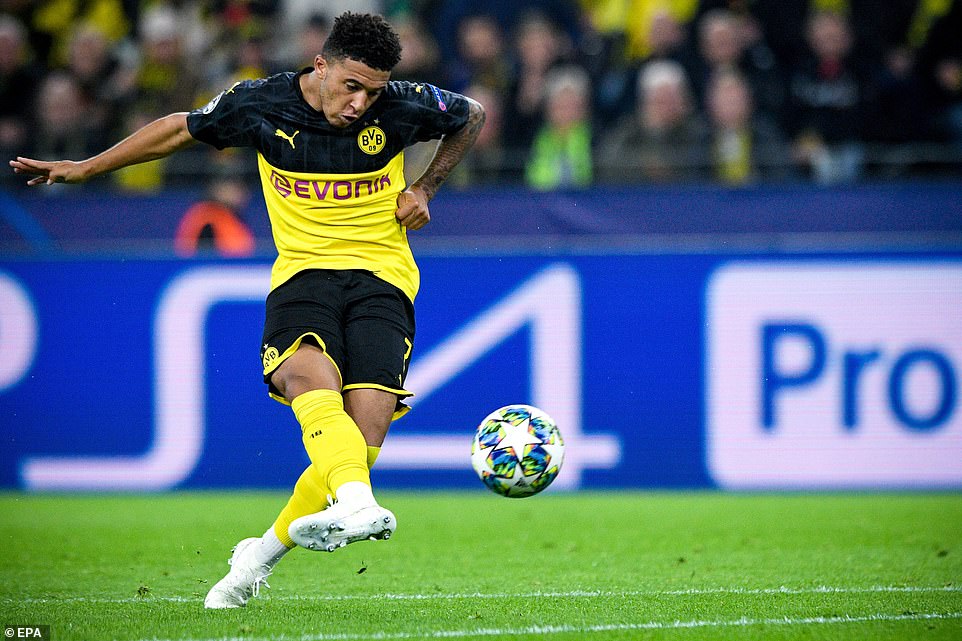 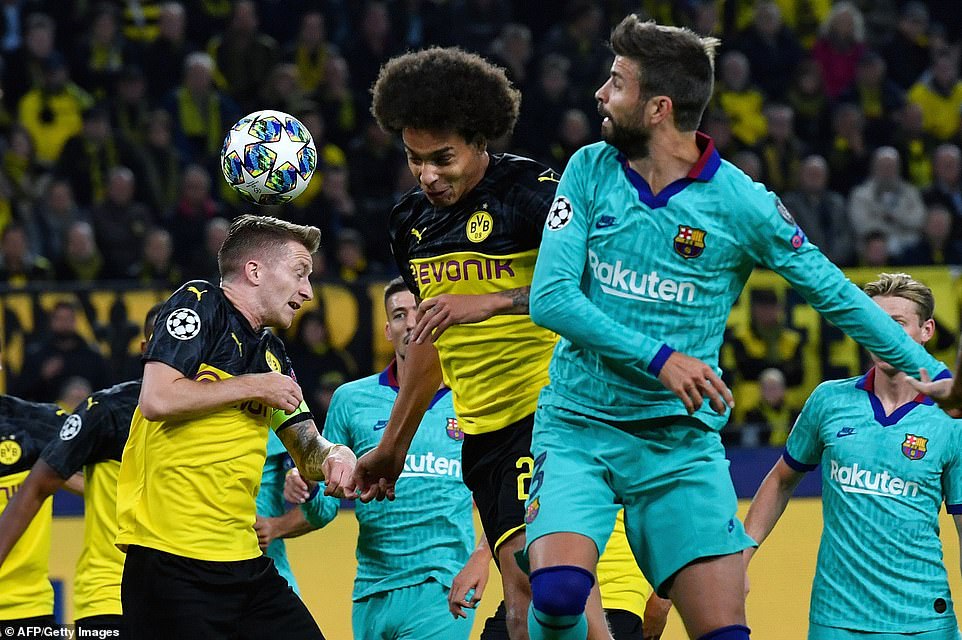 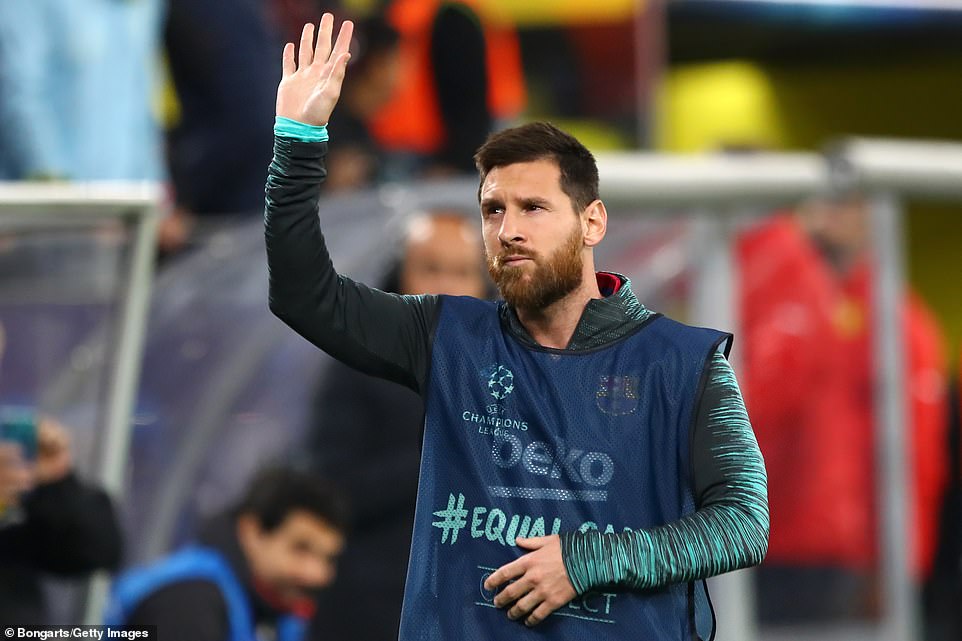 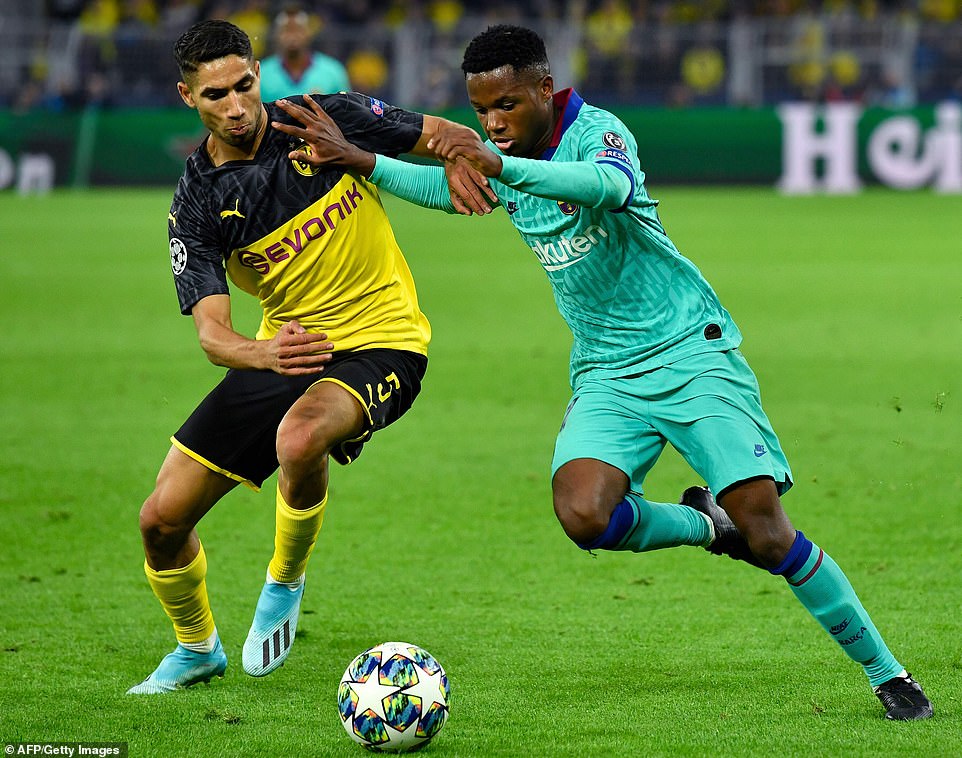 Fati started the game becoming the youngest to debut in the Champions League aged 16 years and 318 days. He soon combined with Luis Suarez who set up Antoine Griezmann whose effort was forced wide for a corner.

Achraf Hakimi, on loan from Real Madrid, was getting forward down the Dortmund right and Sancho was beginning to torment Nelson Semedo down the left. The Barcelona right back was spoken to for chopping him down on 25 minutes.

Ter Stegen had to save smartly with his legs from Reus after he took a pass from Thorgan Hazard and Max Hummels then headed Reus’ free-kick over as Dortmund pressed in the first half.

Barcelona forced another chance before the break when Fati shot over after Roman Burki had charged out to punch clear and flattened Alcacer in the process.

It was then Sancho’s turn to go close, or not so close. Clement Lenglet was robbed by Reus and when the ball ran to Alcacer he played it back to Sancho who blazed high and wide. 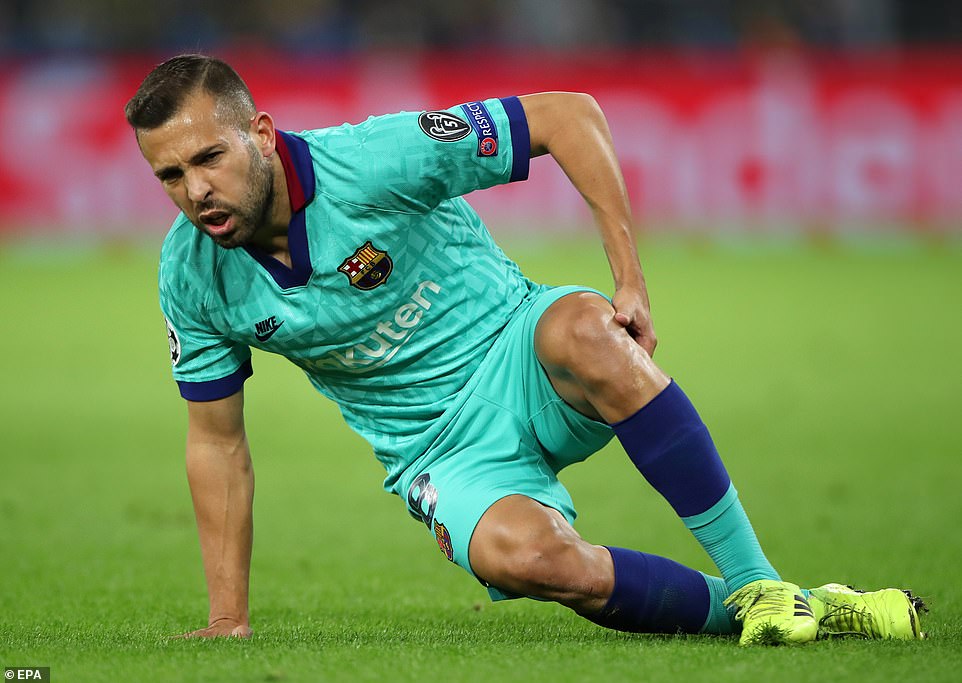 With five minutes left of the first half, Barcelona left back Jordi Alba goes down with an injury to his hamstring 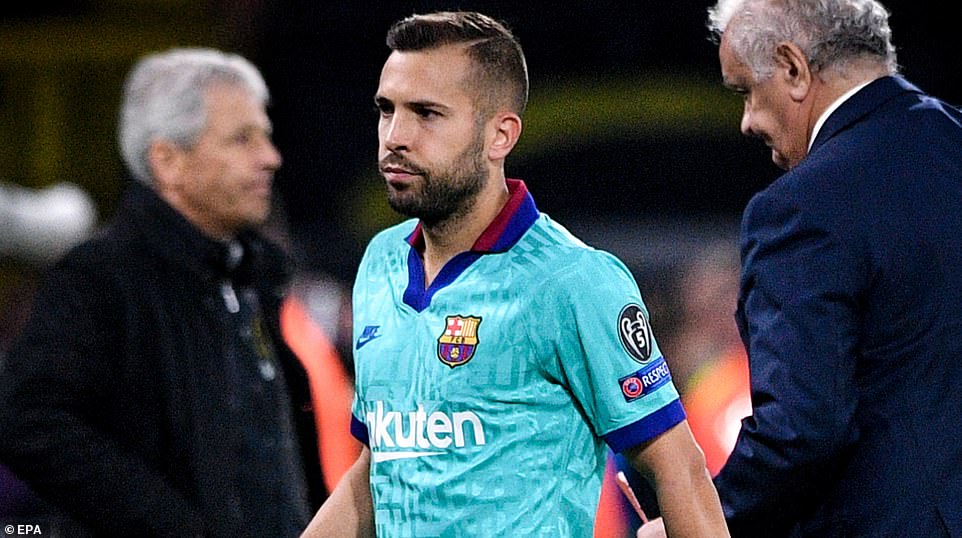 Alba is forced to come off, and as he trundles down the tunnel, Sergi Roberto comes on to replace the Spainard

Barcelona lost Jordi Alba to injury and when Sergio Roberto came on it meant Semedo had to switch flanks freeing him temporarily from Sancho duties.

Barcelona almost took the lead at the start of the second half but Burki saved Suarez’ shot at his near post. But Dortmund immediately took the initiative again and Gerard Pique was booked for a foul on the edge of his area.

Alcacer’s free-kick came to nothing but with Sancho having swapped wings to get another run at Semedo Dortmund still held the upper hand and on 56 minutes Sancho gave them the perfect opportunity to take the lead.

He tricked his way past Semedo who tripped him in the area. Ter Stegen dived to his left to save Reus’ spot-kick and Barcelona were off the hook. The keeper had both feet off the line when he made the save but there was no order to retake the kick.

The scare was the cue for a change. Messi was supposed to come on at the hour mark but on 58 minutes he replaced Fati. The Sancho show continued unabated however and he showed Griezmann’s his heels running clear only to fail to squeeze his pass through too small a gap in Barcelona’s retreating defence. 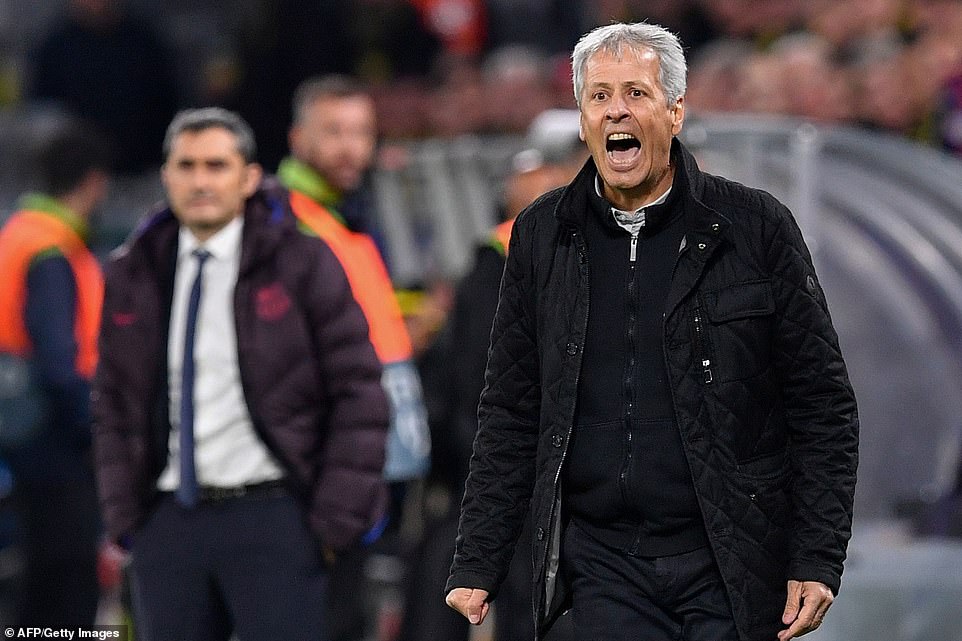 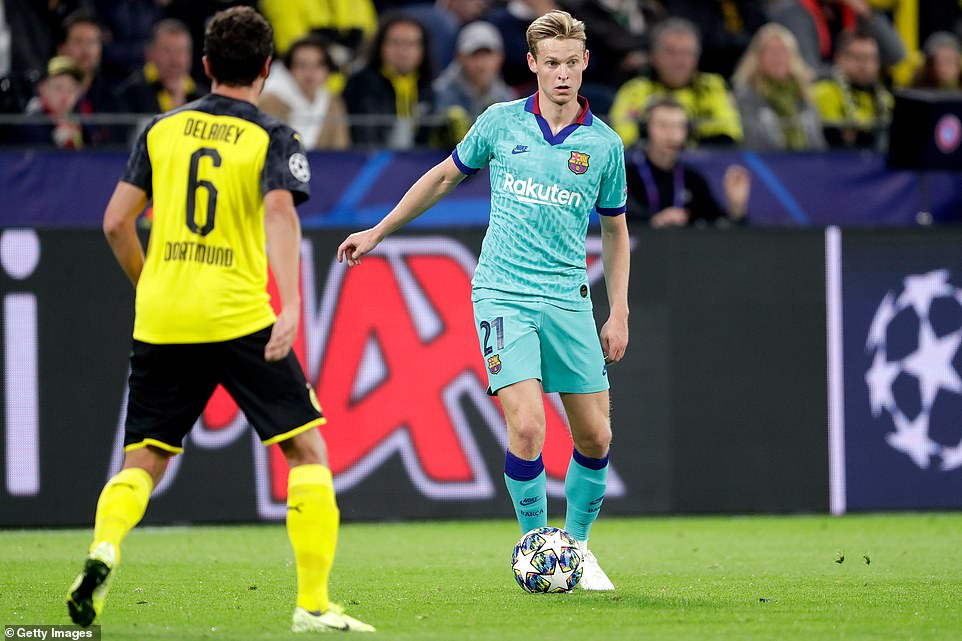 Barcelona’s Frenkie de Jong, who signed from last year’s semi-finalists Ajax in the summer, on the ball in the first period

Sancho then tried to flick the ball past substitute Ivan Rakitic and the midfielder handled to join Pique in the book. Pique then escaped a second yellow when he handled in the centre of the pitch and was only punished with a free-kick.

There was still time for more wastefulness from Reus and more impressive keeping from Ter Stegen.

Sancho sent Achraf down the right and when he pulled the ball back it sat up nicely for Reus. But he missed his second chance of the night skying the effort.

Julian Brandt came a lot closer on 75 minutes when he smashed the crossbar from outside the area.

Barcelona had not improved with Messi’s introduction and they needed Ter Stegen to save them again when once more Reus had the chance to score but again the Barcelona keeper saved at close range. 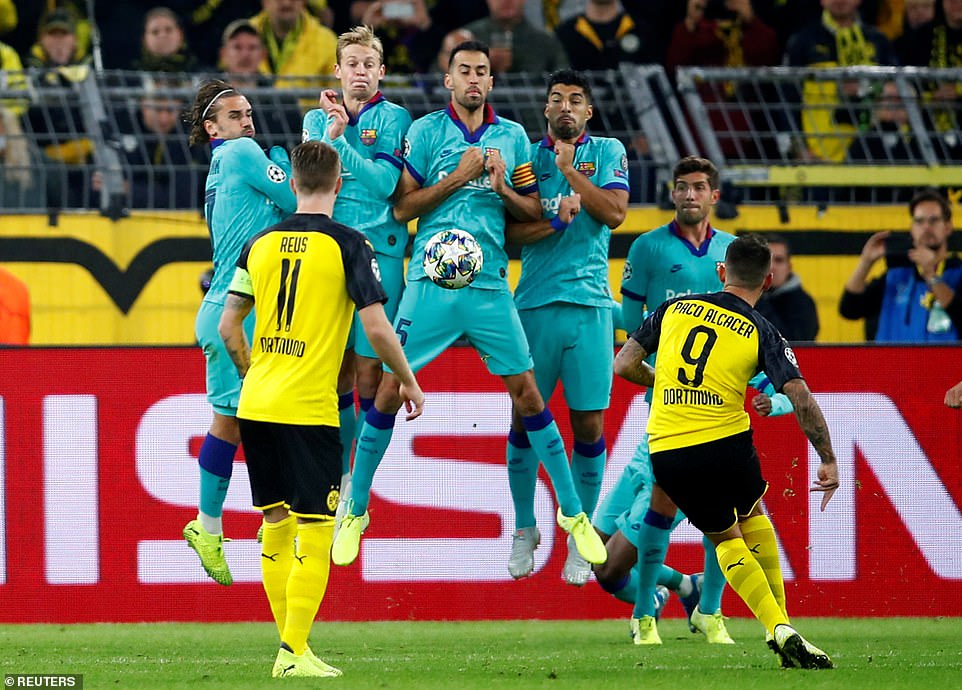