Borussia Dortmund 2-1 Augsburg: Erling Haaland watches on from the stands as Julian Brandt nets second-half winner for hosts in the Bundesliga

Borussia Dortmund twice hit the woodwork and wasted several more chances before squeezing past Augsburg 2-1 in the Bundesliga on Saturday to climb to second place.

The Ruhr valley club bounced back from last week’s loss to Borussia Moenchengladbach and extended their winning run at home to eight consecutive league games to move into second place, within a point of leaders Bayern Munich, who are in action on Sunday against Eintracht Frankfurt.

Julian Brandt bagged a second-half winner after Dortmund’s Raphael Guerreiro had put them in front with a 10th-minute penalty with 41,000 fans allowed in the stadium, the largest number since the outbreak of the COVID-19 pandemic in 2020. 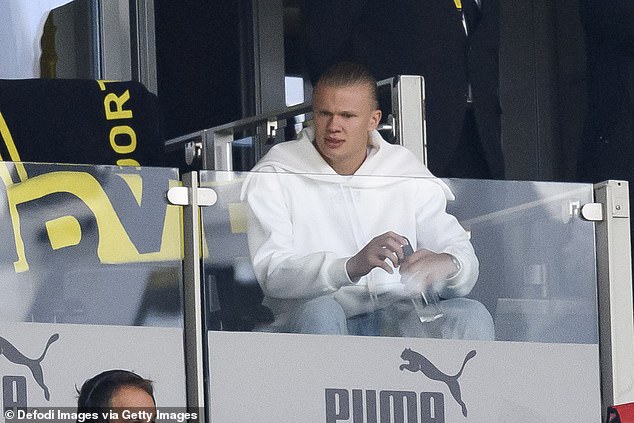 ‘It was an intense game and it demanded a lot from us,’ scorer Brandt said. ‘We kept at it and that was important for us.’

‘But we should have scored a third goal to settle nerves. The way it turned out we were stressed until the 90th minute.’

Augsburg initially struggled to deal with the Dortmund pressure, evident from their three yellow cards and the penalty they conceded in the opening 15 minutes.

But while the hosts may have had possession, they lacked precision and a killer instinct up front, with their top striker Erling Haaland still missing through injury.

Augsburg hung in there and sneaked in a sucker punch before the break when Arne Maier’s 25-metre shot bounced off the crossbar and into the path of Andi Zeqiri who had no trouble slotting in for the equaliser. 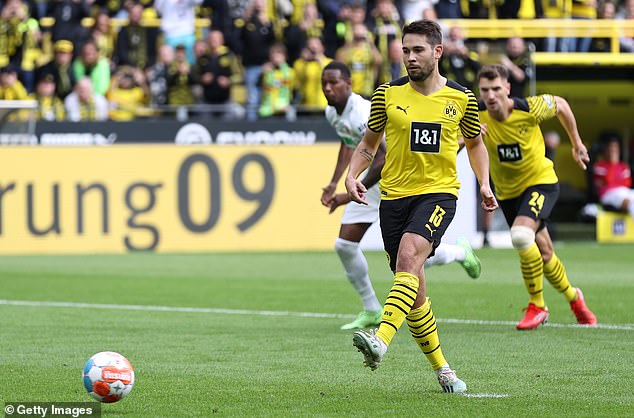 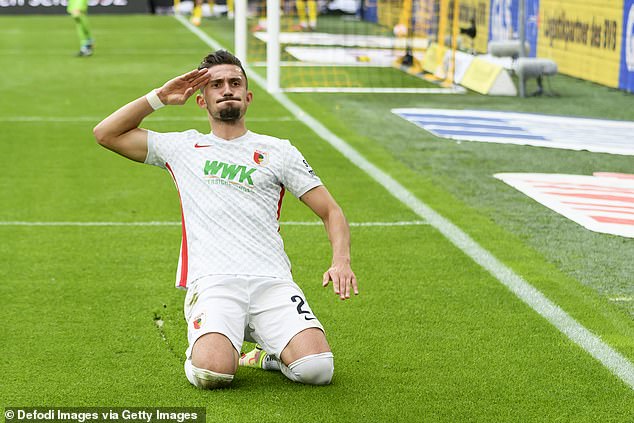 Dortmund needed a special moment from Brandt to retake the lead six minutes after the restart, with the midfielder finding just enough space to weave in a shot with his left foot.

Dortmund captain Marco Reus rattled the crossbar with a shot on the rebound in the 57th and missed another golden chance in the 70th.

Thorgan Hazard also should have done much better in the 66th when, with only the Augsburg keeper to beat, his shot bounced off the post and went wide.

But the win saw Dortmund move up to 15 points, one behind Bayern. Sensational Freiburg, unbeaten so far, are also on 15 following a 2-1 win at Hertha Berlin.

Wolfsburg suffered a 3-1 defeat by visitors Borussia Monchengladbach – their first win there in 18 years – to drop to fifth on 13 points.