Borussia Dortmund playmaker Christian Pulisic has heaped praise on Real Madrid ahead of their Champions League clash on Wednesday night.

The American was suitably impressed with his visit to the Bernabeu last season and is excited to get another chance to play in the Spanish capital.

Dortmund will be playing with little pressure with no possibility of progressing through to the knockout stages of the competition.

Speaking to Sports Illustrated ahead of the game, Pulisic was looking forward to his return to Madrid, despite it being the most intimidating environment he has played in.

He said: ‘The Bernabeu is the most difficult stadium I’ve played in.

‘When we played against them last year I started and it was very intimidating, but it was also fun – the fans and the stadium are amazing.’

With a capacity of 81,044, the Bernabeu Stadium would usually be rocking on a Champions League night but there is little to play for on this occasion.

Zinedine Zidane’s side can only finish second in the group and may well look to rest some key players with the side still struggling in La Liga. 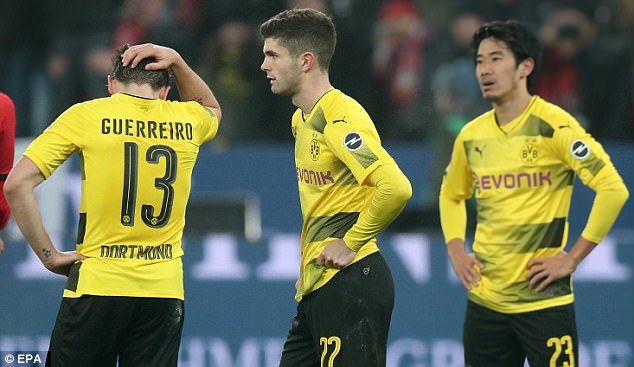 Dortmund, on the other hand, only have to match or better APOEL’s score with Tottenham to secure their place in the knockout stages of the Europa League.

Pulisic was with the squad that was seen at Dortmund Airport as they travelled to Spain on Tuesday morning and could make his fifth appearances in this season’s tournament.

The winger has scored twice in the Bundesliga during a miserable season for Peter Bosz’s side, who sit a lowly sixth in the German top flight.