Bosnia was hit by a 5.2-magnitude earthquake today just hours after Albania was rocked by an even stronger quake which killed at least seven people.

Scientists said the quake had rattled Bosnia this morning with an epicentre around 50 miles south of the capital Sarajevo.

There were no immediate reports of injuries, but experts at a French-based seismology institute said there were 20million people living in the area where the quake was felt.

The Bosnia quake was too big to be an aftershock of the 6.4-magnitude tremor in Albania, but may have been caused by it, said the European-Mediterranean Seismological Centre.

The earthquake in Albania earlier destroyed buildings and left people trapped under rubble in a tremor that was felt across south-eastern Europe – including in Bosnia.

The quake hit near the capital Tirana at 3.54am and brought severe damage to the coastal town of Durres and nearby city of Thumane.

One man in his fifties died after jumping from a collapsing building in Kurbin, while the bodies of a man and woman were removed from rubble in Thumane and a fourth body was found in Durres. At least seven are dead in total and 300 people have been treated for injuries.

Wreckage: Emergency personnel work at the scene of a damaged building in Thumane this morning after a 6.4-magnitude earthquake struck Albania, killing several people and injuring dozens 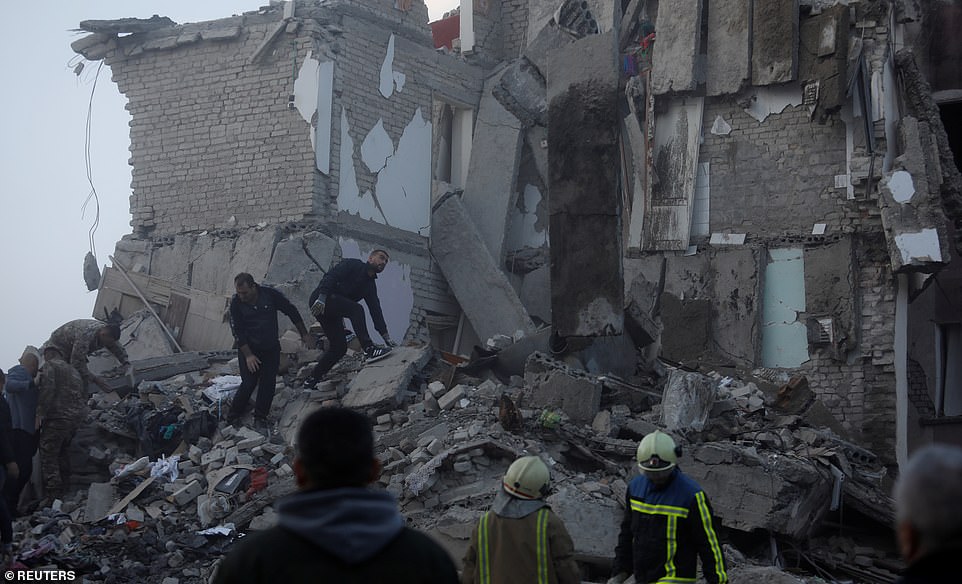 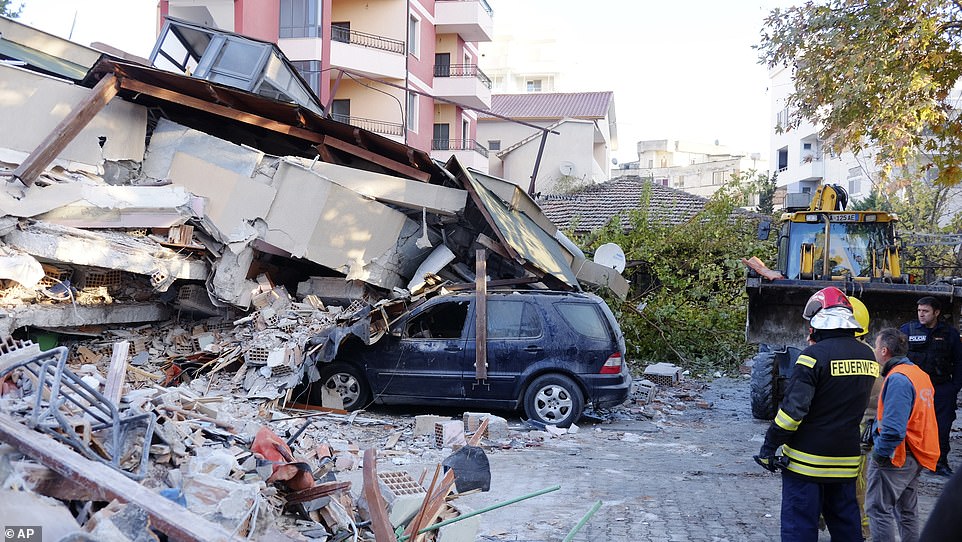 Trapped: A car is stuck under the wreckage of a collapsed building in the coastal town of Durres in Albania this morning 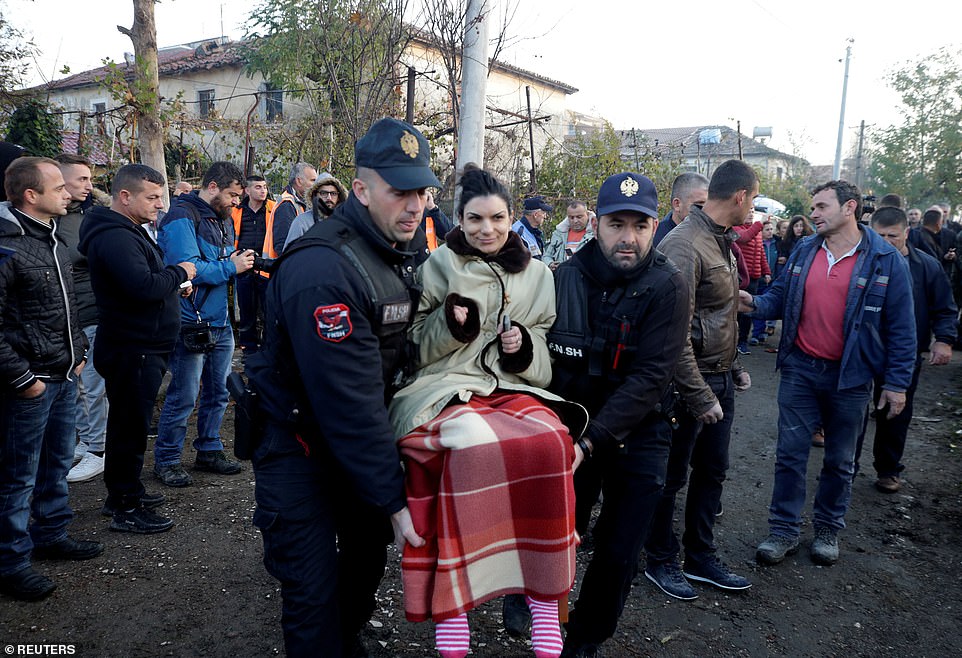 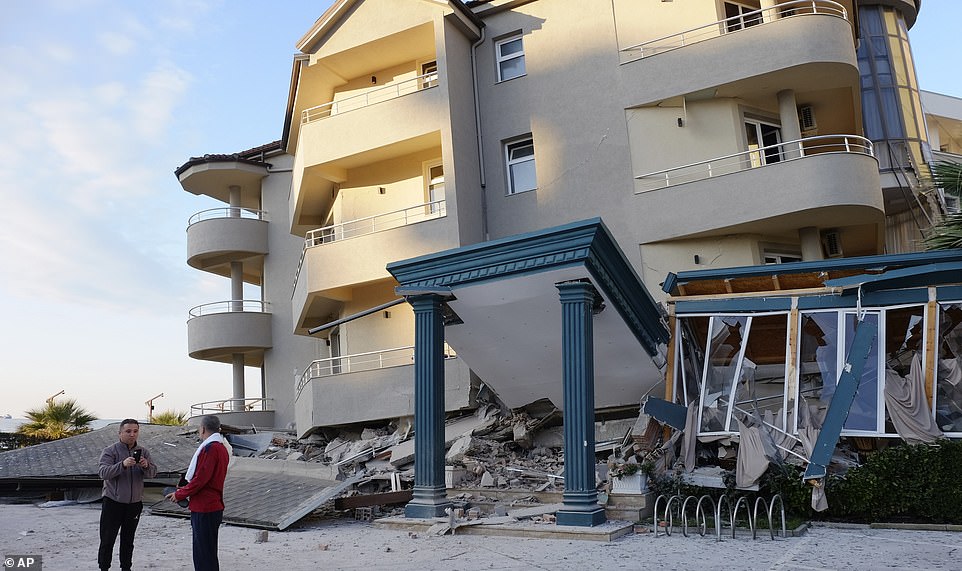 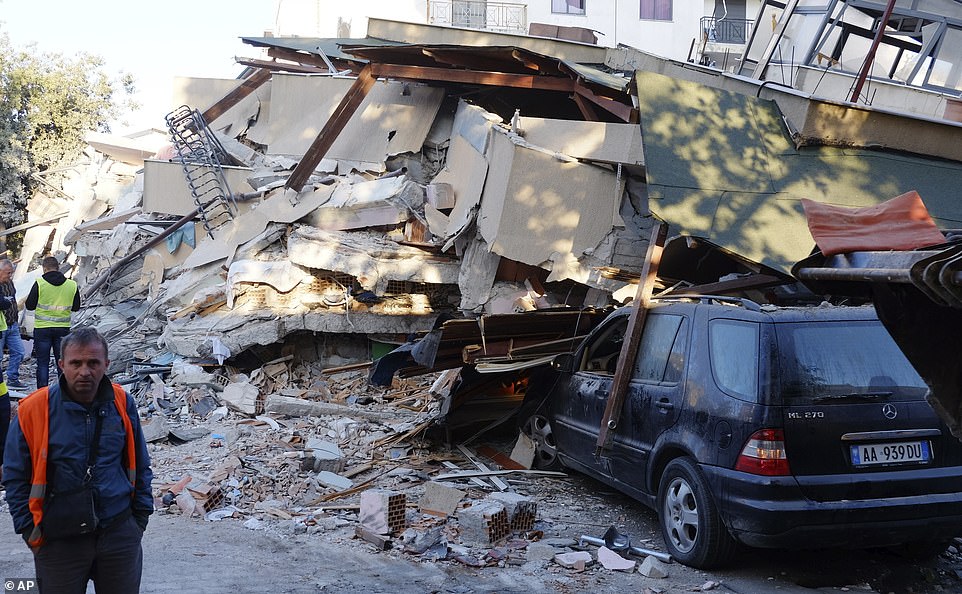 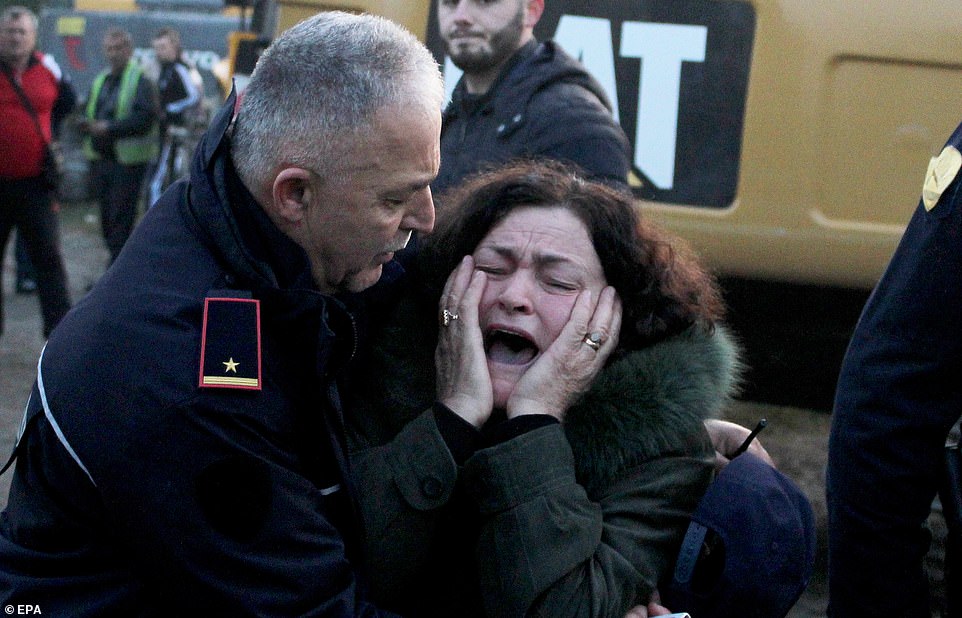 This morning Albania’s president Ilir Meta said that the ‘situation is very dramatic’ and promised that ‘all efforts are being done to take people out of the ruins.’

Emergency workers told local media one of those killed was an elderly woman who had managed to save her grandson by cradling him with her body.

Witnesses said at least one hotel, the four-storey Mira Mare in Durres, was destroyed, while another building in the city centre was badly damaged.

‘Firefighters and army staff are helping residents (caught) under the rubble’, in Durres and nearby Thumane, a Defence Ministry spokeswoman told reporters.

In Thumane Marjana Gjoka, 48, was sleeping in her apartment on the fourth floor of a five-storey building when the quake shattered the two top floors.

‘The roof collapsed on our head and I don’t know how we escaped. God helped us,’ said Gjoka, whose three-year-old niece was among four people in the apartment when the quake struck.

The tremors were felt across hundreds of miles, sending residents rushing from shaking buildings with some holding babies in their arms, witnesses said.

Pictures at the scenes of worst damage showed buildings with large cracks and fallen masonry, including one apartment with most of a bedroom wall missing.

The Interior Ministry has also asked people to avoid driving in the affected areas to allow emergency services to operate freely.  Power was down in several neighbourhoods.

Three hours after the main tremor, a strong aftershock rocked the city, which is known for its colourful mix of architecture from its Ottoman, Fascist and Soviet past.

The US Geological Survey warned an earthquake of that size had the potential to cause widespread damage and casualties. 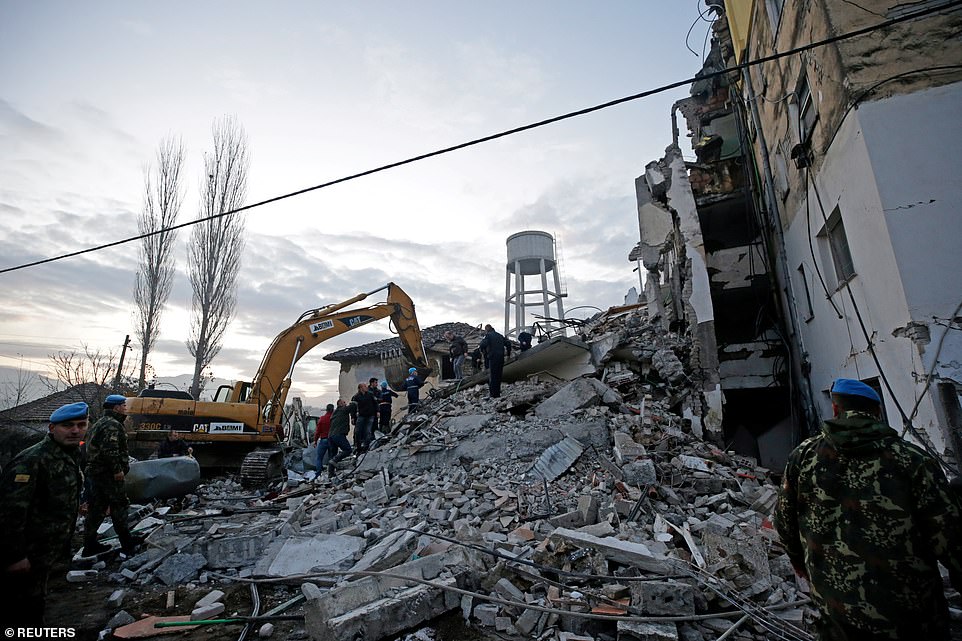 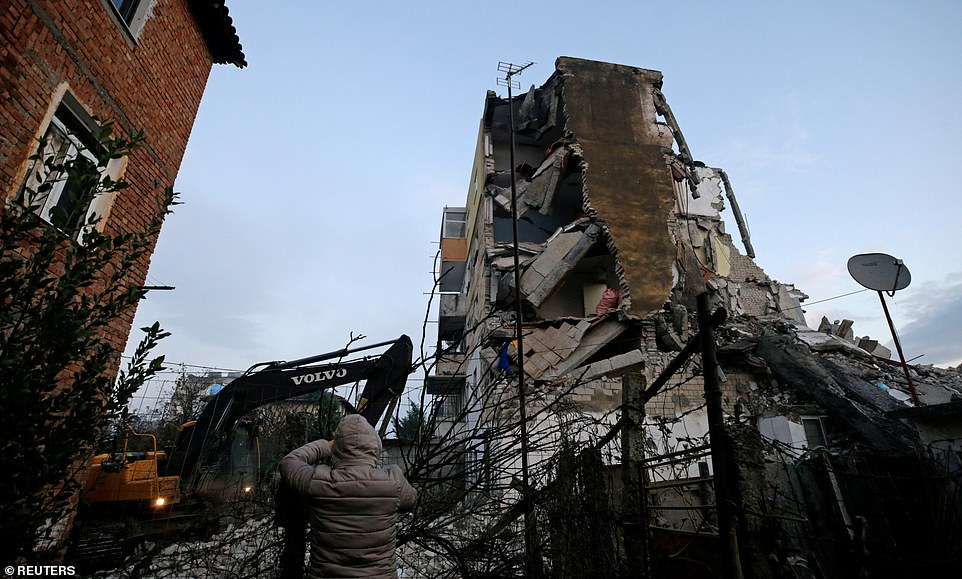 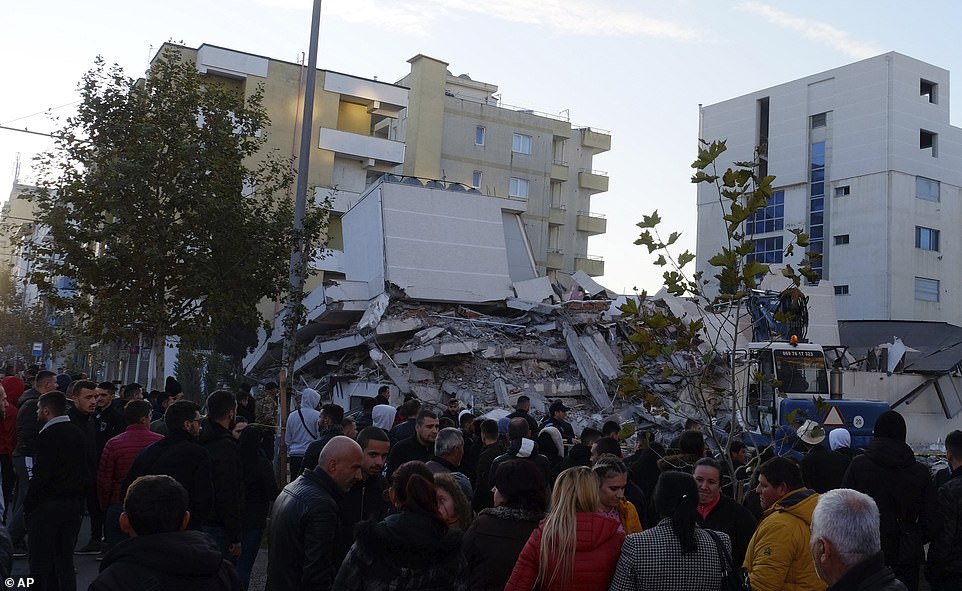 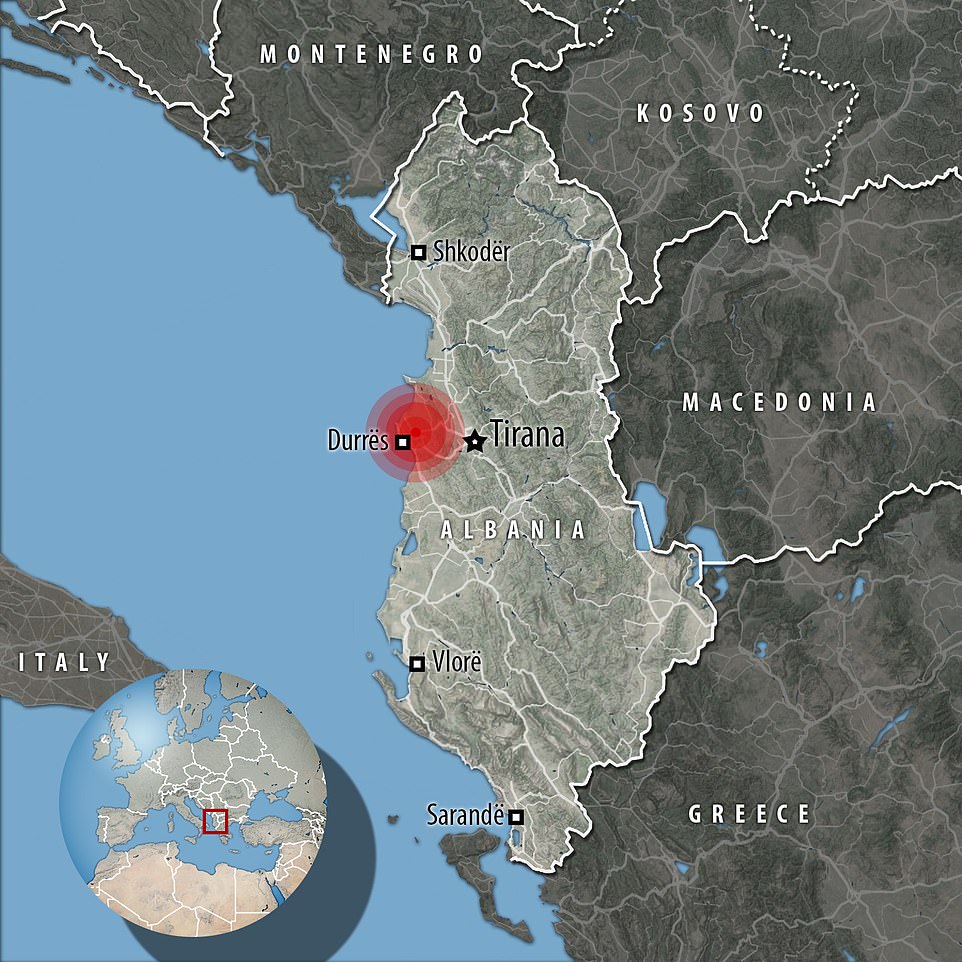 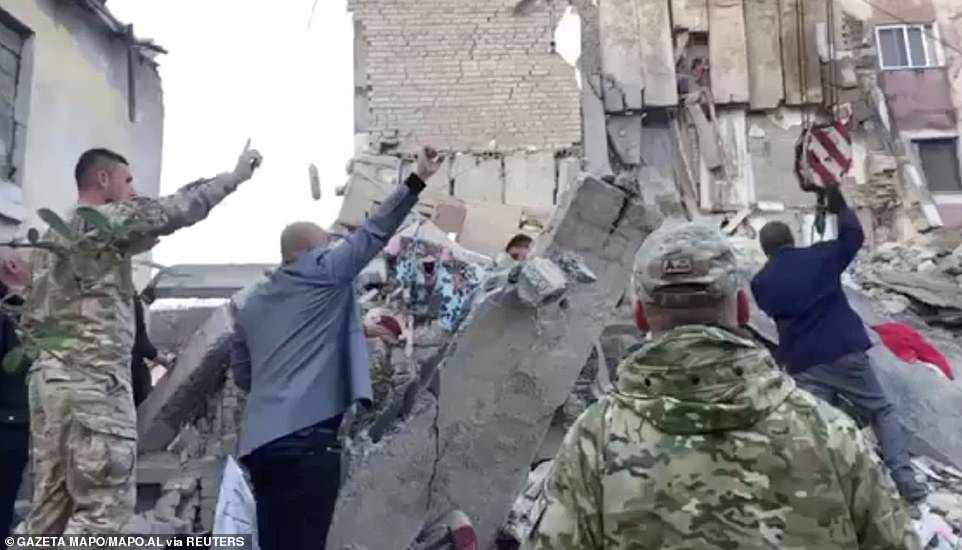 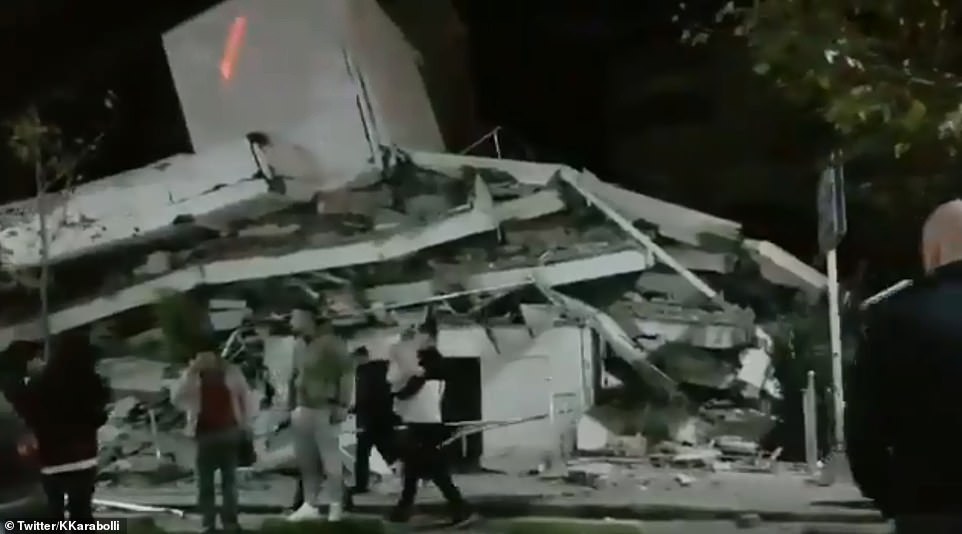 Footage online showed the wreckage of the Mira Mare hotel, a four-storey building in Durres that had been totally destroyed

Turkey’s ambassador to Albania said a group of some 20 Turkish nationals were rescued from a hotel that was damaged in the earthquake. They were rescued with slight injuries and are being evacuated to Tirana, he said.

Prime Minister Edi Rama said this morning that all government agencies are ‘intensively working to save lives at the fatal spots in Durres and Thumane.’

‘It is a dramatic moment where we should preserve calmness, stay alongside each other to cope with this shock,’ Rama wrote on his Facebook page.

President Meta also called on the Cabinet to ask for international assistance and called for solidarity with the affected population.

The quake was felt across the Balkans, from Sarajevo to Bosnia and even in the Serbian city of Novi Sad more than 400 miles away, according to reports.

Many reports of shaking came from the Macedonian capital Skopje. One local, Eva Ellereit, tweeted: ‘Nothing like waking up to your entire bedroom shaking in the middle of the night #earthquake.’

Several smaller tremors were recorded in the hour before the main quake, which was also felt across the Balkans and in the southern Italian region of Puglia.

In September a 5.6-magnitude quake in almost the same spot injured at least 70 people and damaged around 500 buildings. A 6.4-magnitude earthquake would be around 16 times stronger than that, experts said.

Computer predictions from the USGS said around 8,000 people would have felt ‘severe’ shaking in today’s quake, and a total of almost 12 million would have felt it in countries including Greece, Montenegro, Kosovo and North Macedonia.

An aftershock of around 5.4-magnitude shook the area minutes after the main tremor and minor quakes were continuing to rattle the region through the early hours. 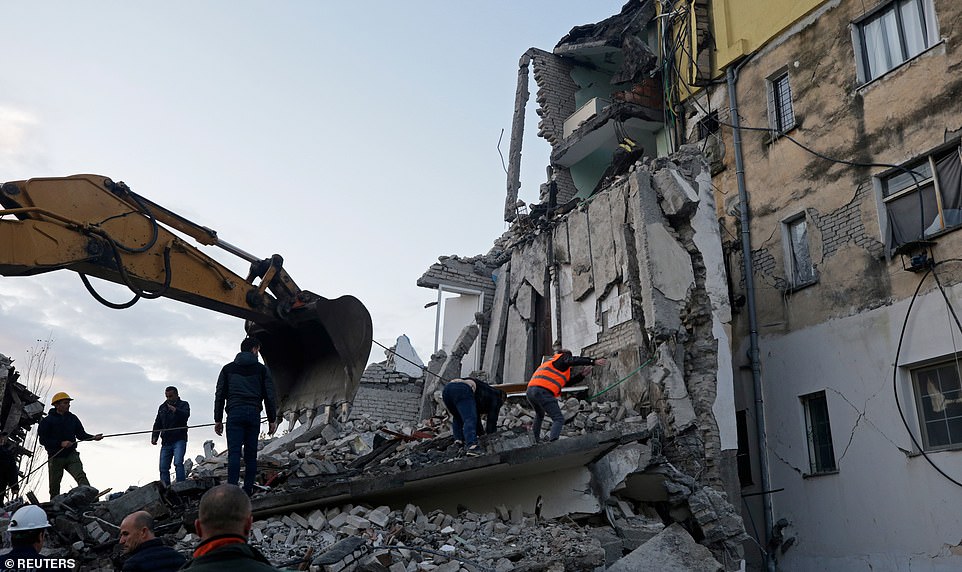 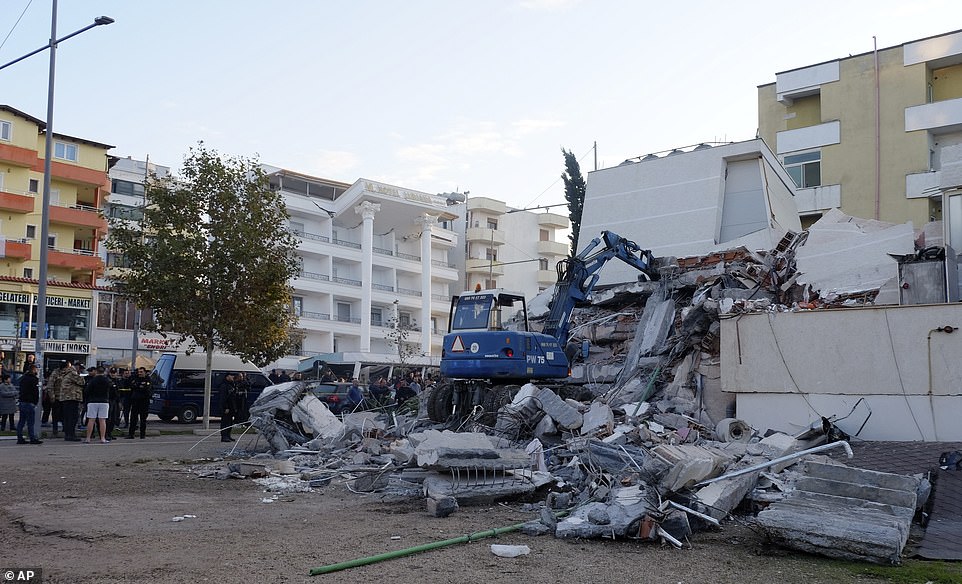 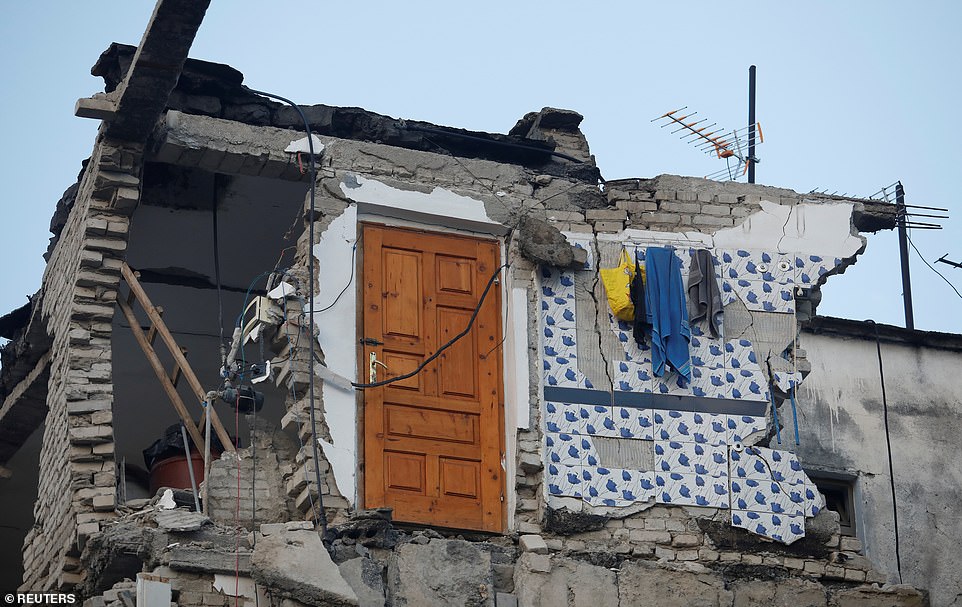 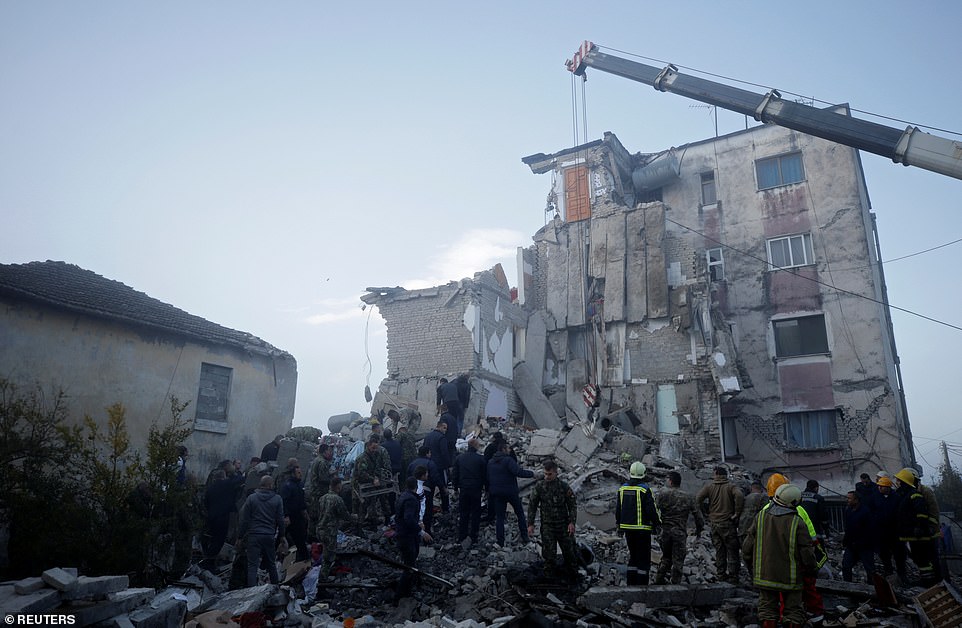 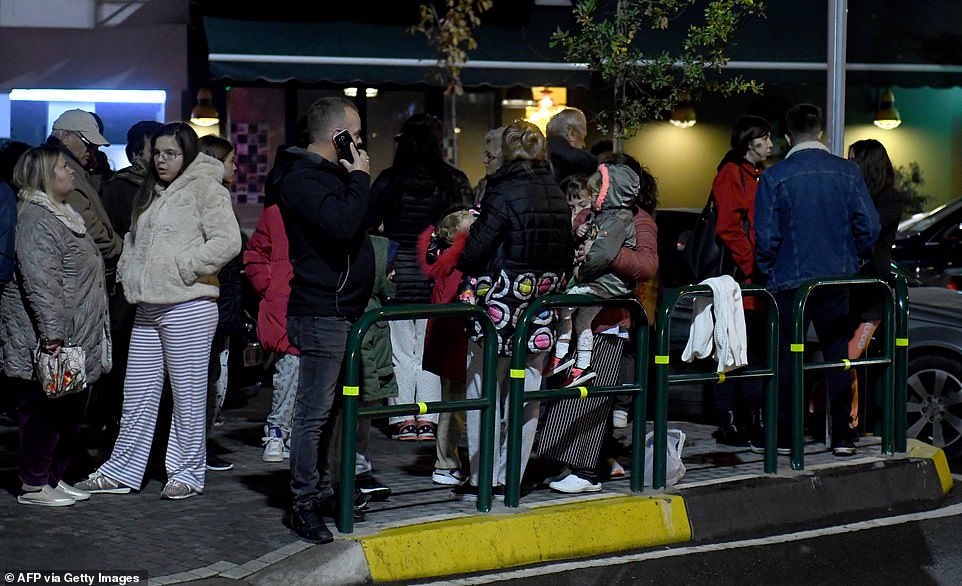 Residents gather outdoors in Tirana after the earthquake struck. Some locals were sent rushing into the streets in panic 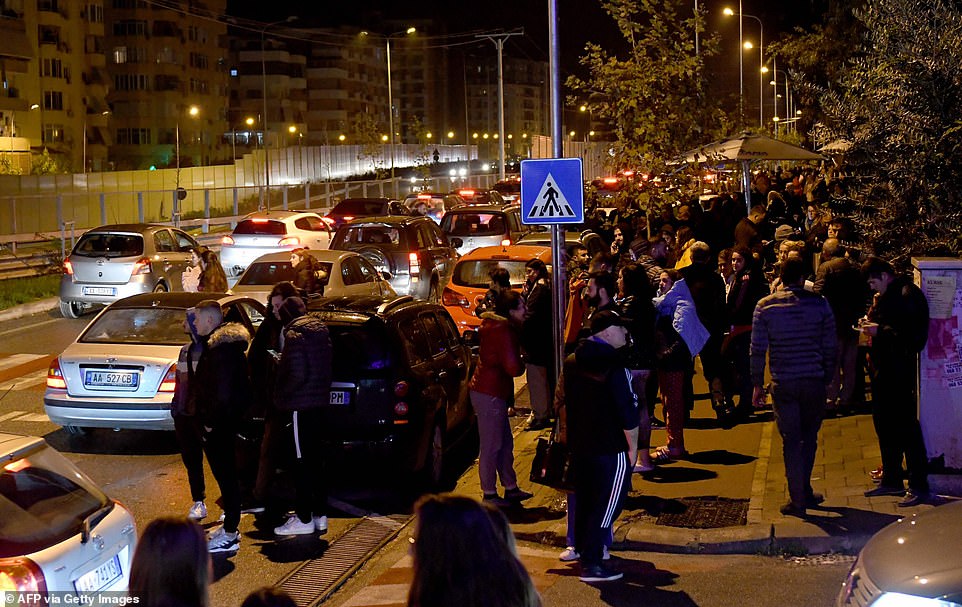 Reports of violent shaking came from across the region, including the capital cities of Tirana in Albania and Skopje in Macedonia