Neil Masterson reckons Britain could become a nation of rocket scientists – with his satellites venture acting as a springboard. It is an admirable ambition for the new chief executive of OneWeb, the communications firm creating a constellation of satellites in space.

OneWeb went bust last year, but was bailed out by the British taxpayer. The controversial decision by Government to pump £400million into the stricken, high-risk venture – alongside $500million from India’s Bharti Global – was credited as the brainchild of Boris Johnson’s influential former adviser Dominic Cummings.

In the business world, the jury is still out on whether it was a foolish move or a masterstroke. But Masterson is in no doubt.

Ambition: Neil Masterson says he will take on rivals – including Elon Musk

‘What we have now is an indigenous British space industry that can lead to next generation satellite development and give the graduates of our many universities a real career opportunity in Britain,’ the Lancastrian says. ‘We’re not going to lose them abroad to others, but rather we’ll keep them here. As we’ve seen in the pharma industry, that’s good for our future [economy in Britain].’

OneWeb’s efforts are complemented by a string of rocket firms, including Sir Richard Branson’s Virgin Orbit, aiming to launch from the UK from next year.

The outlook for OneWeb, founded in 2014 by US entrepreneur Greg Wyler, has evolved rapidly since last year when its biggest investor, SoftBank, pulled funding and triggered bankruptcy.

Bharti chairman Sunil Bharti Mittal now has a 39 per cent stake while the UK, France’s Eutelsat and SoftBank all own just over 19 per cent. The Government – which had been advised by civil servants to steer clear of OneWeb – has a golden share, meaning it can decide who has access to the network.

Masterson is overseeing a grand plan to create a network allowing rapid internet speeds in hard-toreach areas around the world. The first stage in OneWeb’s vision will see 648 spacecraft shot into low earth orbit (Leo) – around 750 miles from Earth – to cover the northern hemisphere, before targeting the rest of the globe.

Some 254 OneWeb satellites are already in space and testing is underway. Services will launch later this year, with the entire globe covered by June 2022.

The venture was last month given a significant boost in signing a deal with BT to explore the use of its services in rural areas and at sea. Beyond commercial telecoms, it has potential uses in the defence and satellite navigation industries.

But the project is not without its hurdles. To hit targets OneWeb will have to launch one rocket – a heart-in-mouth operation which requires meticulous planning – each month for the next 12 months.

As we speak via video call, Masterson’s team are monitoring the latest batch of 36 washing machine-sized satellites being launched from the Vostochny Cosmodrome spaceport in Russia. What’s more, making and launching the satellites has required huge sums of money, with $2.4billion raised so far and $3.4billion chewed up pre-bankruptcy. Talks with funders in Asia are said to be ongoing.

Masterson, who joined OneWeb late last year, says the cash is in the bank to fund its launch. ‘We may raise a bit more, but essentially what we need to do the job we now have,’ he explains. ‘It’s a tremendous vote of confidence in the team, it’s a vindication of, frankly, the Government and Bharti’s first investment.’

The development of OneWeb gives Britain the opportunity to grow an industry that seemed in peril post-Brexit. The timing of its expansion also feels fortuitous – the pandemic has expanded office workers’ horizons in terms of remote working, but also exposed the slow broadband speeds suffered by rural dwellers. Masterson assures: ‘If you’re in the middle of northern Alaska, we will be able to provide the same connectivity, the same speed, low latency, the same feel, as people have in New York City.

‘In the UK, there are obviously locations that do not have the same connectivity as others. We can dramatically narrow that gap, which opens up opportunities from an educational perspective, from a healthcare perspective, and it just opens up the digital economy. What this means is that you don’t have to be in a conurbation to be able to contribute to, or take the benefits from, that digital economy.’

Beyond the logistical headaches lie another threat: Elon Musk. The Tesla founder is busily building his own network of Leo satellites, Starlink, and has begun UK trials. The unpredictable billionaire plans to shoot thousands of the spacecraft skywards at a lower altitude to OneWeb.

Tousle-haired executive Masterson, 53, cuts a comparatively modest figure against his deep-pocketed galactic rival, who is pushing into the final frontier alongside fellow tycoons Jeff Bezos and Branson.

‘I’m a very different character – we’re very much, ‘Let’s just get on with it’. Nothing breeds confidence, particularly for investors, like execution. Let’s just focus on doing our job and then we’ll see. We will fight with whoever’s out there in the market as aggressively as we can, but also where it makes sense.’ He points out that his and Musk’s teams are in regular contact to avoid in-flight collisions. 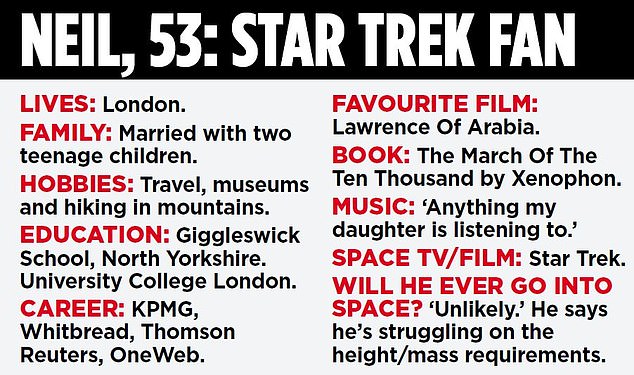 While the natural focus is on the skies, both OneWeb and Starlink are engaged in rapid building projects on the ground too. Each must construct a network of ground stations, capable of receiving a signal from the satellite and relaying it to the users – from schools and hospitals, to ships in the middle of the Atlantic. OneWeb is in the process of creating 42 ground stations at a cost of around £600million. By contrast, Musk’s ground stations are cheaper but likely to be more plentiful.

On his own stations, Masterson says they are being built at ‘an absolute clip’. ‘Either they’re complete, and literally the concrete is being set and the dishes are being put up, or we’re buying the land,’ he says. A large ground station has been constructed in Alaska where the firm is working with US and Canadian operators to ‘fine tune’ its systems this summer.

The Government’s investment in OneWeb also increased the likelihood of production shifting from the US to Britain. OneWeb and manufacturing partner Airbus have committed to building the first 650 satellites in Florida, but The Mail on Sunday revealed last year that civil servants have been briefed on the merits of shifting production of the next generation of the satellites – which could run into the thousands – to these shores.

Masterson said the decision will be taken when designs are finalised in the coming years. Airbus’s existing facilities in Stevenage and Portsmouth could be among the contenders.

It’s been a whirlwind few months for Masterson, a Lancashire-born geography graduate who has spent the last 20 years in New York, working for the software arm of media conglomerate Thomson Reuters. (‘My wife and kids are American, they think I’ve got a very silly accent.’)

He began his career as an auditor at accountancy KPMG, before taking finance roles in the leisure industry, first at Whitbread then Regent Inns. Masterson says he has ‘scars on his back’ from Reuters that he will learn from in steering OneWeb, which he began running remotely and was last week reunited with his family post-quarantine. Plenty of hard yards lie ahead for this determined space man.