Bosses should let workers have an afternoon NAP today

Employees should be allowed to nap at work this afternoon to catch up on lost sleep after the clocks jumped forward an hour, claims one expert.

According to the study’s lead author, psychologist Dr Nerina Ramlakhan, around 25 per cent of works get by on just five hours sleep a night – three hours less than average.

After the clocks went forward, as they did on Sunday, that drops to just four hours – a dangerously amount, she says.

Her research, from the University of Leeds, goes on to cite numerous health problems associated with poor sleep, including diabetes, heart problems and depression.

Furthermore, checking your phone or computer at night and electric lighting can disrupt your sleeping patterns.

Employees should have an hour’s nap due lost sleep after a the clocks leap forward, study says

Struggling to get some sleep

Dr Nerina Ramlakhan, a psychologist who led the research for bed manufacturers Silentnight, thinks the clocks going forward an hour could exacerbate sleeping issues for people who already had them.

‘This weekend the clocks go forward and we’ll lose an hour of sleep on Sunday.

‘The loss of an hour in bed is particularly detrimental to individuals who already struggle with their sleep, and recent research by Silentnight has proved that many Brits, including children, are dangerously sleep deprived,’ she said.

She also expressed her concern about people using their phones or other electronic devices at night.

‘This constant exposure to artificial light can have an effect on our sleep quality, and often even when we think we are indulging in a long sleep, the truth is our sleep quality is poor and we still wake up feeling tired.

‘If you are one of the 25 per cent of the nation that gets less than five hours sleep a night, this time change could see you drop down to as little as four hours, which is a dangerously low amount,’ she adds.

Getting a good ‘catnap’

She further advises: ‘Bosses should consider allowing staff to take a short nap in the office. It can make a huge difference.’

She says that these short naps can bolster the immune system, repair muscles and may even reduce the effects of ageing.

She added: ‘Just a twenty minute power nap can make a huge difference. Naps have been scientifically proven to boost creativity and problem solving ability, and they can even re- balance the immune system, meaning staff are less likely to take sick days.

‘Company nap time would definitely work in the boss’ favour in the long run.

‘Allowing staff to indulge in a nap during the working day might sound unusual, but considering the country will be losing an hour of sleep over the weekend it’s a fair request,’ she says. 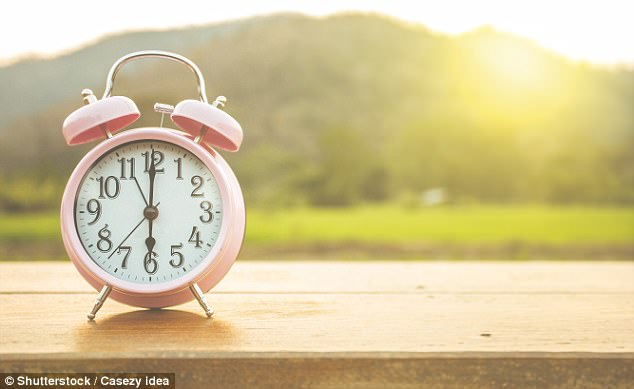 ‘Some kind of national napping day would allow the UK workforce to return to their jobs feeling refreshed and ready.’

She suggests a good ‘catnap’ should take place between 2pm and 4pm, but not later as it may then interfere with your sleep at night.

Another piece of recent research suggests that daylight saving time is behind a number of accidents, health problems – and could even affect how we see the world.

Even judges are said to be affected by the slight time change: they gave five per cent longer prison sentences the Monday after the time change, compared to other days of the year.