The robotic dog built by Boston Dynamics which can open doors, tow vehicles and dance is now available to a select few, but there are still doubts over its practicality in the workplace.

The Massachusetts-based firm has made it available to lease, as well as the humanoid machine Atlas.

However, the famous viral videos which captured worldwide attention gloss over many shortcomings and failures, with the bloopers and outtakes not shown.

Spot, the former name of the robo-dog, has been seen performing all manner of impressive feats, but the developers caution that their exact use remains a mystery.

They are so far ahead of the curve, developers claim, that its exact uses will take time to be fully unpicked.

But they could be used in factories, for security purposes and even in the Cirque de Soleil, the firm claims.

‘We’re going to work together with our customers to figure out what robots are good for,’ says Marc Raibert, who heads Boston Dynamics, told Wired.

‘It’s not like they can do every possible thing, but that doesn’t mean they’re not really good at some things.’

During Amazon’s inaugural Re:MARS conference in Las Vegas earlier this year, one of the four-legged robo-dogs was paraded around the stage.

And the robo-dog took a tumble on stage in front of a live audience.

During a demonstration, the Spot robot suddenly began flailing and crashed to the floor with a thud, generating a concerned ‘Uh oh’ out of Marc Raibert, CEO of Boston Dynamics.

Raibert explained that the machine had failed and would take a few minutes to recover.

It wasn’t clear what exactly caused the robo-dog to fail.

The presenters then hurriedly moved on to demonstrating another Spot Mini robot.

Meanwhile, the limp robo-dog awkwardly laid in a motionless heap in the center of the stage.

Spot is just under three feet tall and has 3D vision, as well as 17 joints to help it move nimbly.

The price of leasing the robot is still largely unknown, but the researchers say it will cost’ about the same as a car.

‘How nice of a car depends on how many robots and how long the lease period is,’ Michael Perry, vice president of business development at Boston Dynamics said.

It can not be bought, Boston Dynamics has said, and its leasers are being carefully selected by the company.

After unveiling its dog-like robot, Spot, two years ago the firm is ready to start selling the mechanical beast to businesses. Spot is just under three feet tall and has 3D vision, as well as 17 joints to help it move nimbly

Boston Dynamics CEO Marc Raibert said that he hopes Spot can be used in a variety of industries, including construction, delivery, security and home assistance.

‘Built to be a rugged and customizable platform, Spot autonomously accomplishes your industrial sensing and remote operation needs – and it is available for purchase,’ Boston Dynamics shared.

This robot is specifically designed to help in the workplace, as it can carry payloads, avoid obstacles and withstand dusty and wet environments.

Although Spot can open doors and carry items, Atlas is designed to put on a show. 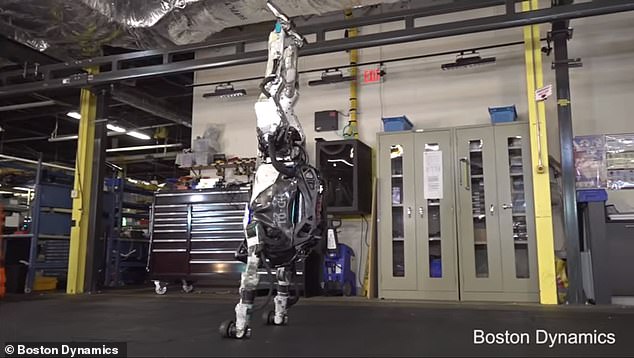 In new footage, the humanoid can be seen doing do cartwheels, handstands and even jump twist turns in an elegant gymnastic routine. Boston Dynamics, based in Waltham, Massachusetts, unveiled Atlas to the public in 2017 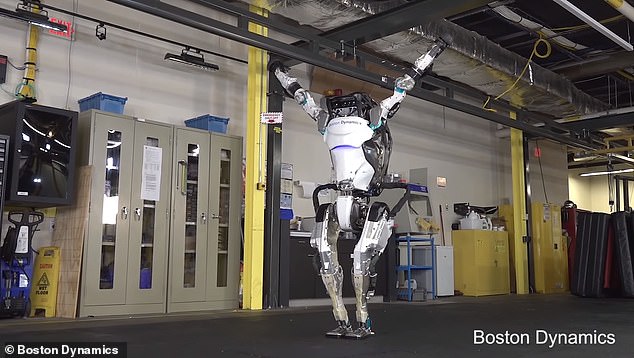 The new video shows Atlas rolling into a handstand, doing jump twists and other gymnastic techniques, and finishing the routine with a perfect landing

In new footage, the humanoid can be seen doing do cartwheels, handstands and even jump twist turns in an elegant gymnastic routine.

Boston Dynamics, based in Waltham, Massachusetts, unveiled Atlas to the public in 2017.

The robot has an amazing ability to keep its balance even when users try to push it over.

To stay standing, Atlas has stereo vision, range sensing and other sensors that give Atlas the ability to manipulate objects in its environment and to travel rough terrain.

Now, with the help of advanced software, Atlas appears to be gearing up for a gold Olympic medal.

Atlas the most human-like robot in Boston Dynamic’s line-up.

According to the company, Atlas is a ‘high mobility, humanoid robot designed to negotiate outdoor, rough terrain’.

The humanoid walks on two legs, leaving its arms free to lift, carry, and manipulate objects in its environment. 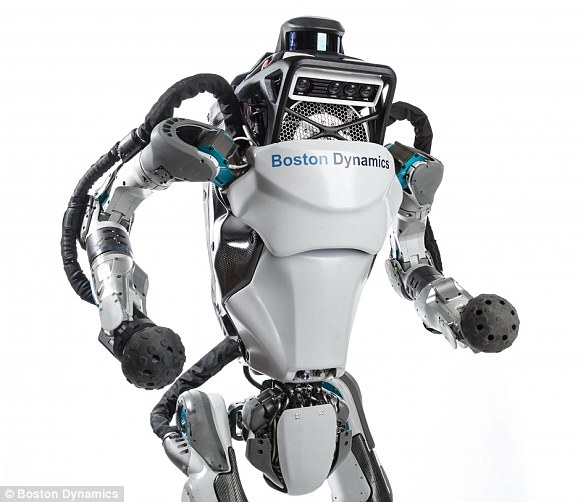 Atlas is able to hold its balance when it is jostled or pushed by an external force. Should it fall over, the humanoid robot is capable of getting up again on its own

Stereo vision, range sensing and other sensors allow Atlas to walk across rough terrain and keep its balance.

‘In extremely challenging terrain, Atlas is strong and coordinated enough to climb using hands and feet, to pick its way through congested spaces,’ Boston Dynamics claims.

Atlas is able to hold its balance when it is jostled or pushed.

If the humanoid robot should fall over, it can get up on its own.

Atlas is designed to help emergency services in search and rescue operations.

The robot will be used to shut-off valves, opening doors and operate powered equipment in environments where human rescuers could not survive.

The US Department of Defence said it has no interest in using Atlas in warfare.

Atlas is capable of —

‘Atlas has one of the world’s most compact mobile hydraulic systems,’ reads Boston Dynamics’ site.

‘Custom motors, valves, and a compact hydraulic power unit enable Atlas to deliver high power to any of its 28 hydraulic joints for impressive feats of mobility.’

The humanoid is constructed with lightweight, 3D printed parts, which gives it strength to leap and allows for more flexible motions.

The new video shows Atlas rolling into a handstand, doing jump twists and other gymnastic techniques, and finishing the routine with a perfect landing.