By Ben Spencer, Medical Correspondent For The Daily Mail

Alcohol firms will finally put strict new drinking guidelines on bottle and can labels three-and-a-half years after they were drawn up.

Updated advice directing both men and women to drink no more than 14 units a week was published by the Government’s chief medical officer in January 2016.

It says there is no ‘safe level’ of consumption and is far more stringent than the old guidance, which recommended a maximum of three to four units a day for men, or two to three units for women.

The alcohol industry’s standards body told its members in 2017 they were not obliged to print the new limits because the guidance was voluntary.

However, the Portman Group, which represents firms including Bacardi, Heineken, Carlsberg and Diageo, the maker of Smirnoff and Guinness, has changed its advice. Firms were told they had until this September to update packaging but until now virtually all labels have carried the old guidance.

The group now says all members have agreed to carry the 14-unit guidance ‘as soon as they feasibly can’ – and it has urged the rest of the industry to follow suit.

Last night, chief medical officer Dame Sally Davies welcomed the move, saying: ‘People often do not know the damage that regularly consuming more than 14 units a week can do to their health.’

And the Portman Group’s John Timothy said: ‘While labels are only one means through which to communicate information, as a responsible sector we believe it is important to do everything we can to promote moderation and minimise the risk of harm.’ 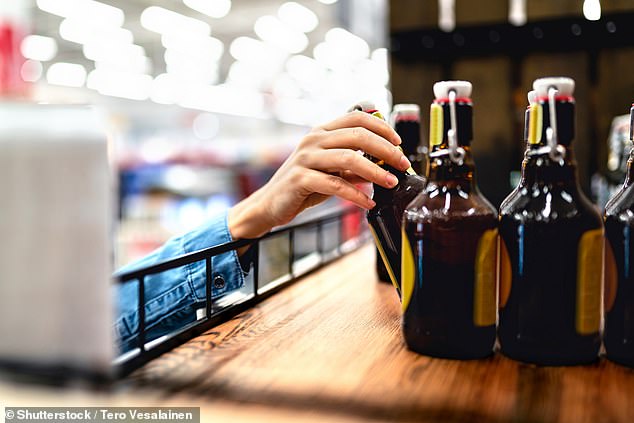 The change in alcohol guidance marked the biggest shake-up for 30 years and was driven by new evidence linking alcohol and cancer. The Government clearly told the industry it ‘expected’ companies to update labels – and it even produced sample messages.

The Portman Group advised firms that labels should include, as a minimum, information about drinking in pregnancy, the number of units contained and the address of the Drinkaware website.

Katherine Severi, of the Institute of Alcohol Studies, said the change of tack was ‘a victory for the public’ – but warned the industry cannot be trusted to regulate itself.

She added: ‘These proposals fail to provide details on calories and ingredients, meaning that shoppers who buy alcohol get less information than when they buy milk or orange juice.’