The footage shows the doorman throw the woman outside the front door of the bar, before punching her square in the face.

Kieran Elcock filmed the carnage last Friday night, outside the Station Hotel in Wellington, near Telford, Shropshire, where a dad-of-three was fatally injured by a bouncer six years ago.

The video shows a commotion happening inside the bar as the doorman, who has a badge on his sleeve, grabs the woman by the arm and throws her outside.

As the doorman is seen clenching his fist, he mouths something at the woman and points his finger at her.

But the woman moves forward towards and receives two blows directly to the face from his clenched fist.

Her head his flung back appears momentarily dazed as the doorman motions with his thumb for her to leave. 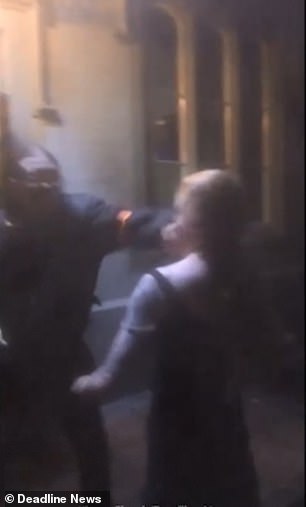 He then takes a fighting stance, turns back to check what’s going on, and then swings again for the woman.

She stumbles back and the clip ends with the commotion inside the bar spilling out the front door.

Facebook users were generally appalled by the bouncer’s behaviour and lack of professionalism.

One wrote: ‘Doorman needs to be struck off. You don’t hit females like this. He hasn’t got very good skills. I would sack him on the spot, have useless doorman like that working for me it’s a shambles.’

West Mercia Police spokesperson said: ‘We’re aware of the video and are carrying out enquiries into a report of an assault at the Station Hotel in the early hours of Saturday morning. 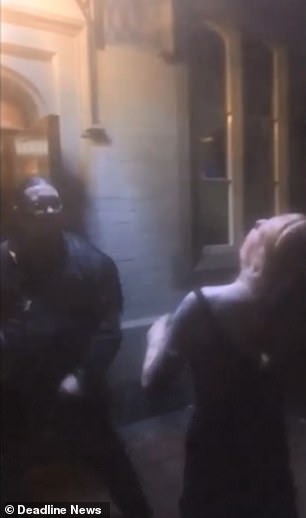 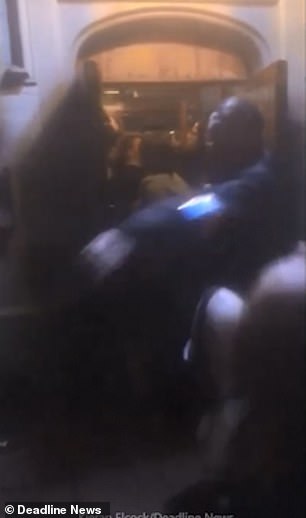 The video shows a commotion happening inside the bar as the doorman, who has a badge on his sleeve, grabs the woman by the arm and throws her outside before assaulting her