Bouncer shoves three women to the pavement outside Belfast club

Police are investigating an incident where three women were shoved onto the pavement by a bouncer outside a busy nightspot in Belfast.

One of the women was said to have been kicking the bouncer before he grabbed her and shoved her onto the footpath, stunning onlookers.

When the woman’s two friends intervened, they were also knocked to the ground.

The video of the incident was circulated widely on Facebook and shows the women in a nasty violent brawl with the doormen.

It is not clear how the altercation started but in the longer footage circulating on facebook, the three women can be seen repeatedly attacking the bouncers after being shoved and even at some points slapped by the men who were on the door of the nightspot.

At one point one of the bouncers grabs the woman in yellow and shoves her so hard that she lands with force on the pavement. We then see the woman’s two friends try to retaliate but he effortlessly pushes them to the ground.

They could be heard in the footage yelling ‘You’re a f****** bully’, as they fell to the ground. 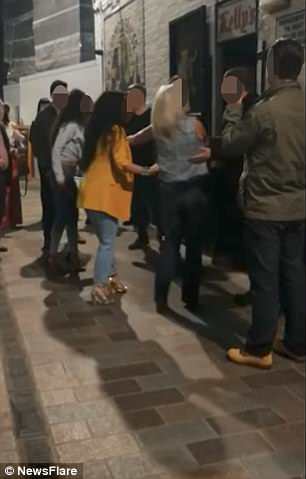 The shocking brawl took place outside a busy Belfast nightspot. A video circulated on Facebook of bouncers on the door of Kelly’s Cellar bar in a violent brawl with three women

Onlookers try to pull the women away from the door as they repeatedly try to retaliate.

The footage was taken by a horrified spectator who watched the scene unfold outside outside Kelly’s Cellar bar in Belfast city centre.

A video was posted online shortly after  a shocked onlooker who filmed the vicious brawl.

A police spokesman said officers were called shortly before 10pm on Saturday evening after reports of three women being involved in an row with bouncers outside the establishment. 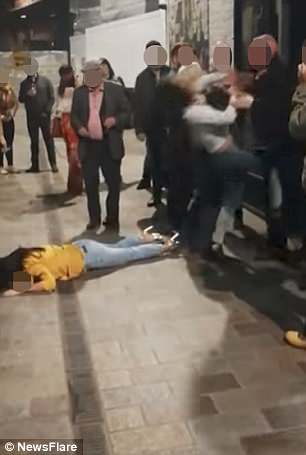 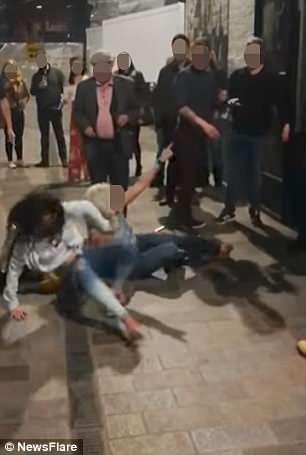 At one point, the lady in yellow is knocked to the ground by the bouncer after she allegedly started kicking him. Her friends try to retaliate but they are also shoved to the ground

The three women were arrested on suspicion of assault and other public disorder offences.

Kelly’s Cellar bar is a busy nightspot in the heart of Belfast City Centre. It has been reported that the cast members of Game of Thrones, including Kit Harrington and Emelia Fox have visited after filming. 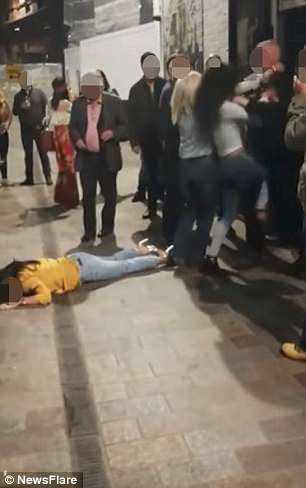 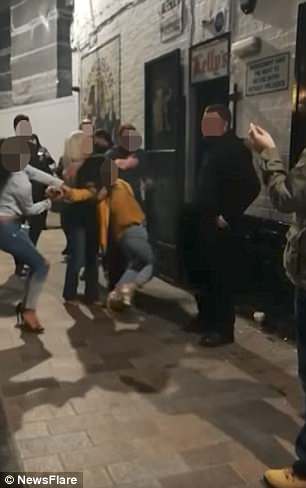 Most bouncers are trained to resolve tense situations through verbal communication instead of physical force, according to Legal Match.

They are not allowed to push or physically throw a person out of the establishment.