Bournemouth 2-1 Sheffield United: Hosts score twice in three minutes to recover from a goal down and move three points clear at the top of the Championship

Bournemouth staged a stirring second-half comeback against Sheffield United to maintain their unbeaten record and move top of the Championship table.

After Morgan Gibbs-White gave the visitors a second-half lead, Dominic Solanke and Philip Billing turned the tables in three remarkable minutes to secure the points at a rain-soaked Vitality Stadium.

Boss Scott Parker would have been delighted with his side’s response after a disappointing goalless draw at Peterborough in midweek, with the promotion-chasers now three points clear of West Brom at the summit.

In contrast, a second successive league defeat means Slavisa Jokanovic’s men slip down to 15th, six points from the play-offs.

Enda Stevens’ fierce left-wing cross was just about turned around the post by Cherries stopper Mark Travers inside the opening two minutes, while at the other end Billing had his long-range free-kick palmed away.

Strong winds and heavy rain led to little fluency from either side during the opening stages at the Vitality Stadium, and the treacherous conditions meant a mistake always felt like either side’s best chance of breaking the deadlock.

That proved to be the case as Robin Olsen passed the ball straight to Billing 30 yards out but the Dane’s feeble first-time hit rolled straight into the arms of the grateful Blades keeper.

An expansive move from the Cherries saw Jaidon Anthony fire a low cross across the visitors’ goalmouth but no one was on hand to tuck the ball home.

Another error, this time from Lloyd Kelly, saw the Cherries skipper mis-control the ball and allow Billy Sharp through on goal but the veteran could only lift his shot over the bar. 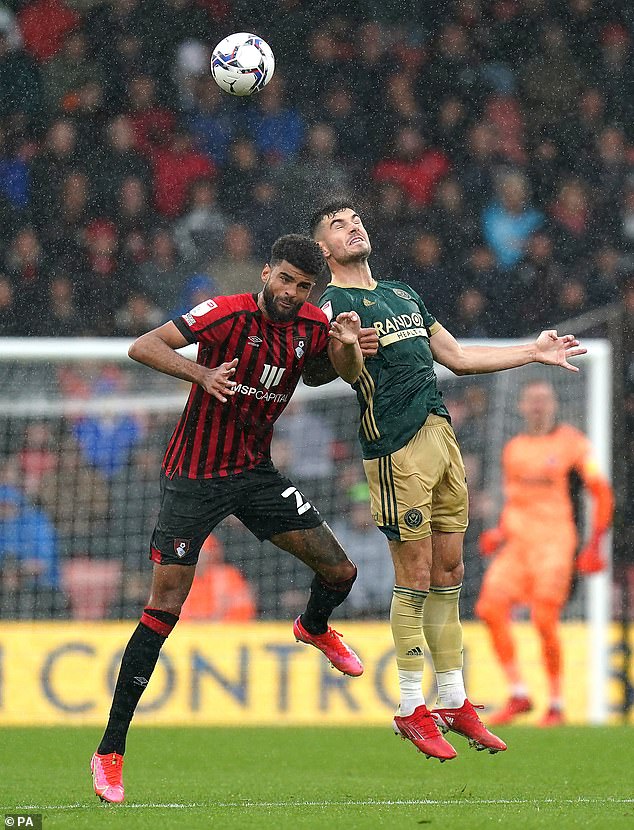 With half-time nearing, Ben Davies nodded over the bar from close range for the visitors before Ryan Christie blazed high and wide following a swift counter-attack by Scott Parker’s men.

The second period began in lively fashion, with Solanke denied by Olsen amid a frenetic goalmouth scramble.

Despite struggling to impose themselves after the break it was the visitors who took the lead just before the hour mark.

Bournemouth failed to clear a long ball, allowing Billy Sharp to work space on the right and cross for Gibbs-White to stab home first-time inside the box.

Minutes later, Enda Stevens scythed down Solanke as he raced into the box to allow Bournemouth an immediate opportunity to restore parity. 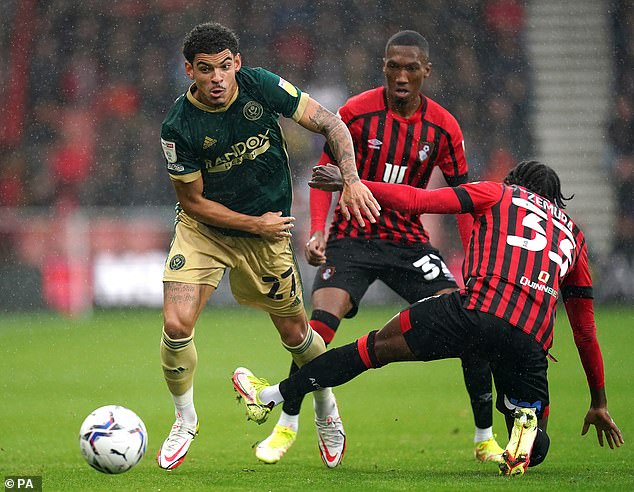 England international Solanke dusted himself down to calmly fire in his eighth goal of an impressive personal campaign.

With the momentum now firmly in their favour, the Cherries seized control of the game as Solanke stole the ball high up and fed Ryan Christie, who slid the ball across goal for Billing to poke home.

Jordan Zemura could have added a third as he charged forwards from left-back, exchanged passing with Solanke and sent his shot into the side netting.

The visiting fans thought they had a late equaliser when Gibbs-White’s free-kick hit Oli McBurnie, but the ball flashed just past the post.

The visitors sat deeper in the final five minutes as they sought to protect their slender lead, with the Blades pushing for a much-needed leveller.

There was little panic until former Cherry Lys Mousset struck the bar from a yard out before McBurnie’s follow-up scissor kick flew just wide.

However, with five of their seven league wins having come by a single-goal margin this season, the hosts were in familiar territory and were able to once again see off the six minutes of injury-time in relative comfort.