More than a sore head tomorrow! Drunk man fails to jump across canal as he plummets crotch first into wall

This is the hilarious moment a drunk man attempts to jump a canal in Bournemouth Gardens.

Cheered on by friends, the man referred to as, Connor, in the video, stumbles on the grassy bank outside the pub.

He almost clears the stagnant water before falling into it leaving him with more than a sore head in the morning.

He jumps around saying he can’t do it as friends ask ‘ask you jumping that?!’.

When he replies ‘yes’, he is met with raucous laughter from the group.

As he runs to the water, he plummets crotch first into the canal edge in a painful failed attempt – much to the amusement of onlookers and pals. 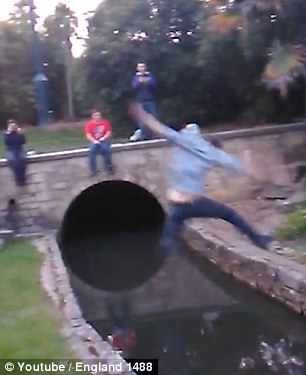 While his right leg cleared the water, his left leg fails to clear it and hits the wall of the canal dragging him into the water.

But they spare a thought to ask if he’s okay.

Connor who has pulled himself out of the water at this point, victoriously gives friends a thumbs up as he lies on his back. 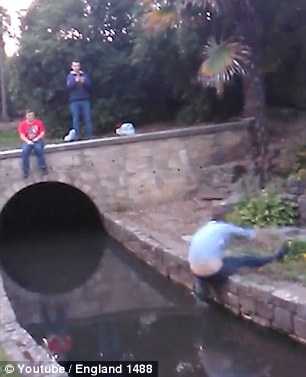