Army Sgt. Bowe Bergdahl delivered a surprise two-hour testimony in which he tearfully apologized to those hurt by his actions before his own sentencing on Monday.

Bergdahl could get life in prison for deserting his post in Afghanistan in 2009. Before he took to the stand, the court had heard testimony from the wife of a soldier who was paralyzed in combat while searching for him.

‘I would like everyone who searched for me to know it was never my intention for anyone to be hurt, and I never expected that to happen,’ Bergdahl told the court, his voice choked with emotion.

‘My words alone can’t take away their pain,’ he added, according to CBS News.

Army Sgt. Bowe Bergdahl (pictured Monday) told a court in Fort Bragg on Monday that he was sorry for those who were hurt looking for him after he left his post in Afghanistan in 2009 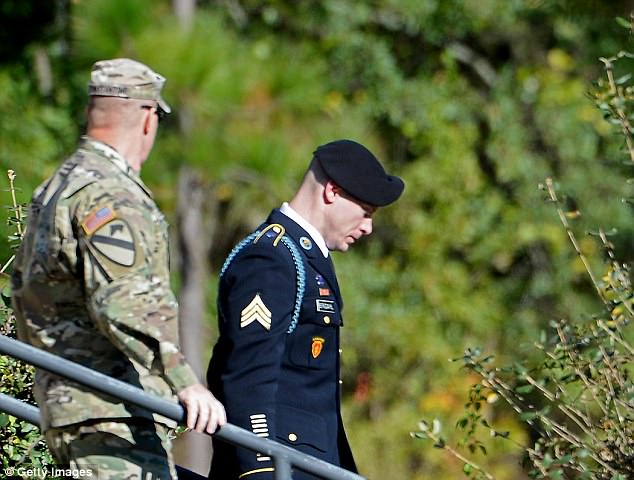 Bergdahl (seen with his escort on Monday) gave a two-hour testimony in which he talked of being tortured for five years by the Taliban, who captured him after he walked out

Bergdahl talked in detail about the torture he endured from the Taliban-aligned Haqqani network, which captured him after he left his post, during his testimony at Fort Bragg, North Carolina.

He said that due to repeated escape attempts, he spent four out of the five years in a cage, and upon release his muscles had wasted away so much he could barely stand.

Bergdahl’s lawyers tried to argue on Monday that criticism by President Donald Trump is preventing him from having a fair sentencing hearing.

Trump called for Bergdahl to be shot or thrown out of a plane without a parachute while running for election; he brought the comments back when Bergdahl pleaded on October 16.

He also ruled that a reasonable member of the public would not have doubts about the fairness of military justice because of Trump’s comments.

The judge did say, however, that he would consider Trump’s comments as a mitigating factor in the sentencing.

He also described being beaten with copper wire and suffering severe stomach distress due to the filthy conditions he was made to live in.

‘It was the years of waiting to see whether or not the next time someone opens the door if that would be the person coming to execute you.’

That experience has left him so traumatized that he must sleep with a flashlight and check his door three times before he can go to bed.

He also has flashbacks that can be unpredictably triggered by everyday smells such as perfume or garbage, he said.

His testimony was entered as unsworn statements, which mean he will not face cross-examination from the prosecution.

Bergdahl has pleaded guilty to desertion and misbehavior before the enemy.

His remarks came after several days of emotionally charged testimony from the soldiers who were wounded in the search for him, and their families.

The last to testify for the prosecution was Shannon Allen whose husband, National Guard Master Sgt Mark Allen, was shot in the head during an insurgent ambush.

He was left unable to speak and is paralyzed over much of his body. 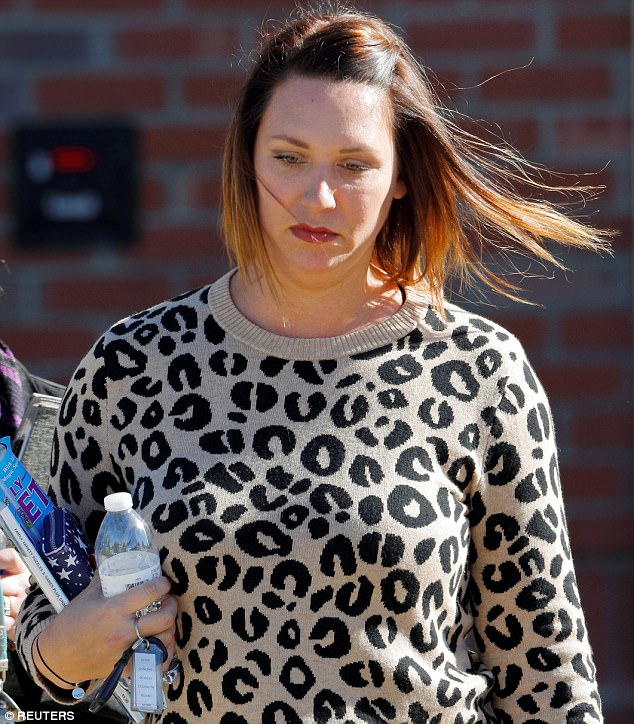 Before Bergdahl took the stand, Shannon Allen (pictured) described how her husband, Sgt Mark Allen, had suffered brain trauma after being attacked while searching for him 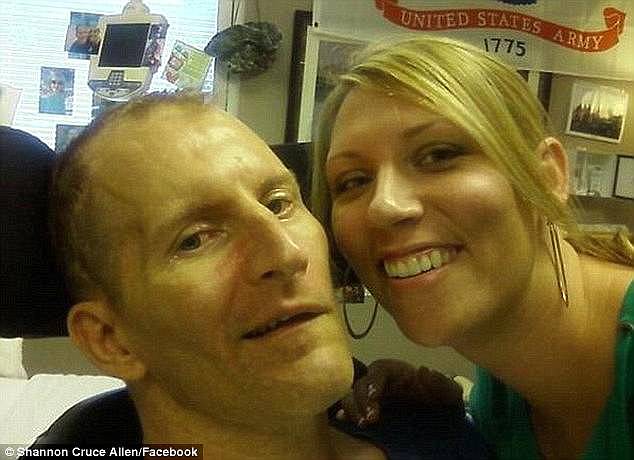 Allen was shot in the temple during the search. Shannon (pictured with her husband) wept in court as she described how her husband’s injury had completely transformed their lives 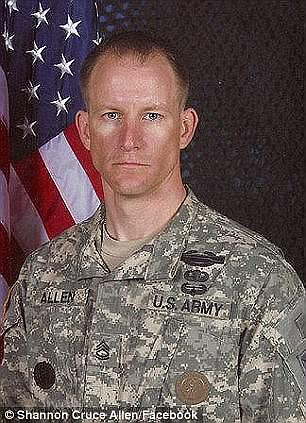 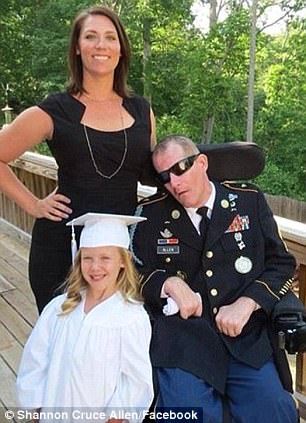 Allen was left unable to speak and is paralyzed over much of his body. Shannon told the court how he is unable to reach out and touch his daughter, who is now nine

Mrs Allen’s voice faltered when she referred to the brain injury’s effect on his interactions with their daughter, who was an infant when he was wounded.

Their daughter is now aged nine, but Mrs Allen said her husband isn’t able to reach out and hold her.

Bergdahl faces up to life in prison after pleading guilty to charges that he endangered comrades by walking off his post in Afghanistan in 2009.

After walking off his post, Bergdahl was held by the Taliban for five years before eventually being released in a 2014 prisoner swap criticized by Republicans.

Prosecutors are using wounds to several service members who searched for Bergdahl as evidence to convince the judge that he deserves a stiff punishment. 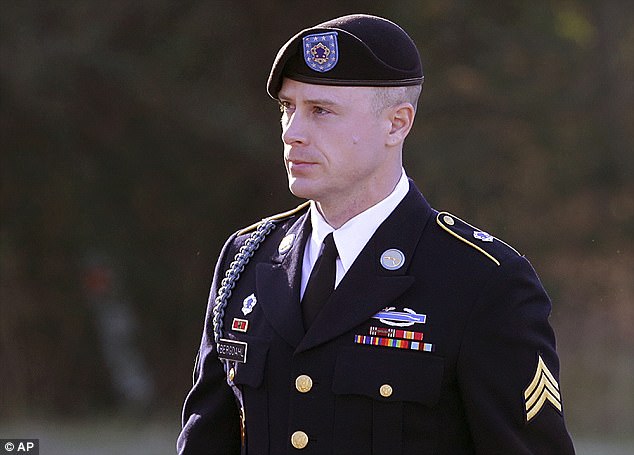 After walking off his post in 2009, Bergdahl (above in January 2016) was held by the Taliban for five years and eventually released in a 2014 prisoner swap criticized by Republicans

A parade of prosecution witnesses have described the danger they faced while searching for Bergdahl after he disappeared in June 2009 and the lasting effects of injuries they sustained in the futile hunt.

Several service members on Thursday recounted a hastily organized mission in July 2009 to search villages near Forward Operating Base Kushamond that ended in a Taliban ambush.

‘Everything went black,’ he testified. ‘I saw stars.’

As soldiers scrambled back to their position behind a berm, Walters saw Sergeant 1st Class Mark Allen get shot in the head.

US Air Force Lieutenant Colonel John Marx, then a captain, said he helped load Allen into a medical helicopter. 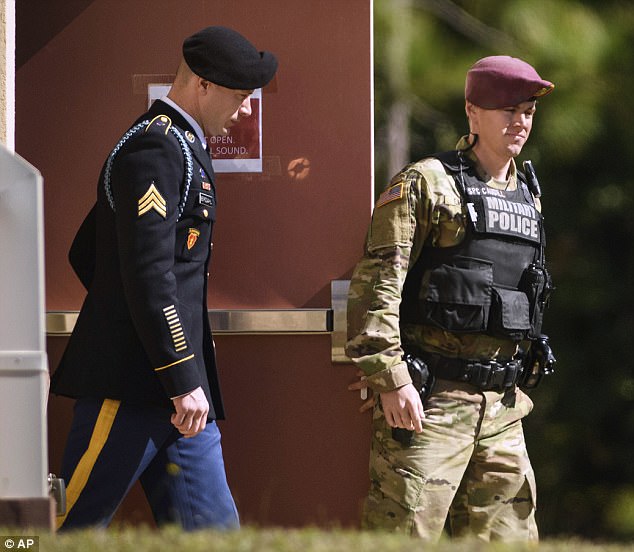 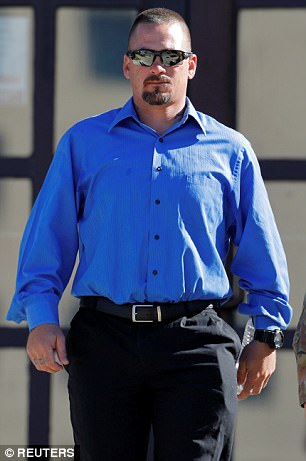 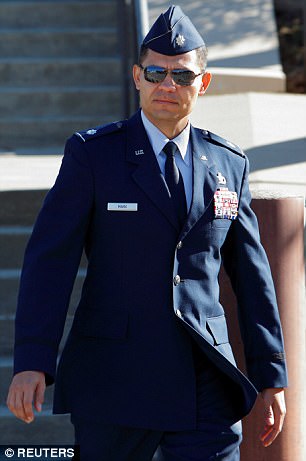 ‘That was probably one of the hardest things I’ve ever had to do, getting Sergeant Allen on that chopper,’ Marx said. ‘It was hot, we were dehydrated, and just carrying his limp body – it was tough.’

Army Specialist Morita, who was hurt in the same ambush, underwent three surgeries to repair his hand.

He said he is more agitated and angry than before, and he directs his anger ‘toward one person in particular’.

As Morita left the courtroom on Monday, he leveled a steady glare at the defense table where Bergdahl sat.

Retired Navy Senior Chief Petty Officer James Hatch also testified about his career-ending injury and a a military dog killed on a mission searching for Bergdahl.

Hatch said the dog helped protect his team by locating enemy fighters after the SEALs lost sight of them in a chaotic situation.

‘His name was Remco,’ Hatch said as his voice cracked.

Hatch said his team’s helicopters came under fire as they landed in an area near the Pakistan border where they had information on Bergdahl’s possible whereabouts.

He said the mission was hastily planned, and their only objective was the Bergdahl search. 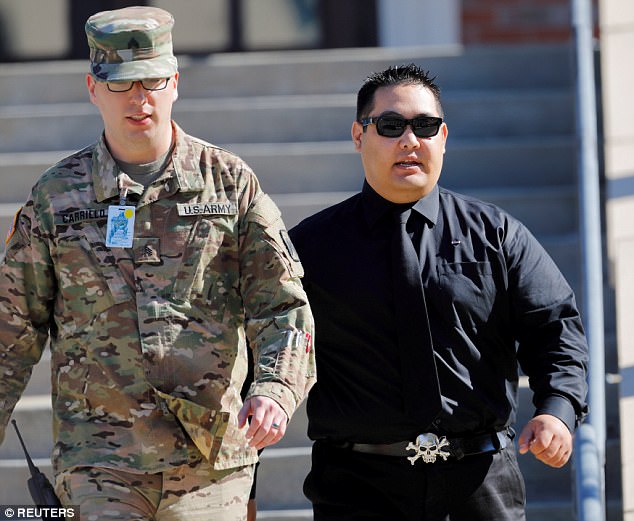 Jonathan Morita (right), a former US Army soldier who was injured while searching for Bergdahl after he deserted in Afghanistan, leaves the courthouse after testifying on the third day of sentencing proceedings in Bergdahl’s court martial last week 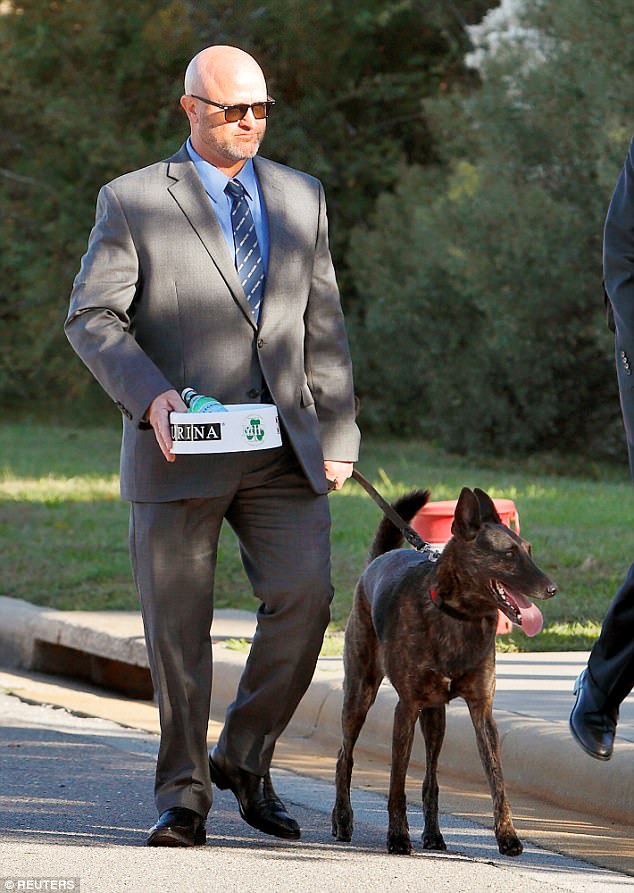 Former Navy SEAL James Hatch, who was shot in the leg during a July 2009 attempt to rescue Bergdahl in Afghanistan, arrives with his service dog at the courthouse to testify on the second day of Bergdahl’s sentencing proceedings last week 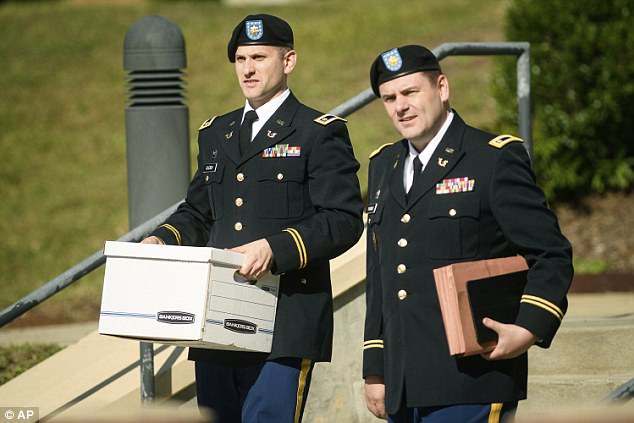 Remco was leading them through a field when the dog located two enemy fighters that the team had seen at a distance. Hatch said the fighters sprayed AK-47 bullets at them, killing the dog. He was hit in the leg.

‘I screamed a lot. It hurt really bad… I thought I was dead,’ he said.

Hatch said he believes he would have died if a comrade hadn’t quickly applied a tourniquet. Hatch has subsequently had 18 surgeries.

He now runs a nonprofit dedicated to the care and support of military and law enforcement dogs.

The judge, Army Col. Jeffery Nance, ruled those injuries would not have happened had Bergdahl, 31, not endangered his comrades in 2009 by walking away from his post.

Prosecutors made no deal to cap Bergdahl’s punishment, so the judge has wide leeway to decide his sentence. Several more days of testimony are expected.

Bergdahl, from Hailey, Idaho, has said he was caged, kept in darkness and beaten, and tried to escape more than a dozen times before President Barack Obama brought Bergdahl home in 2014 in a swap for five Taliban prisoners at Guantanamo Bay. 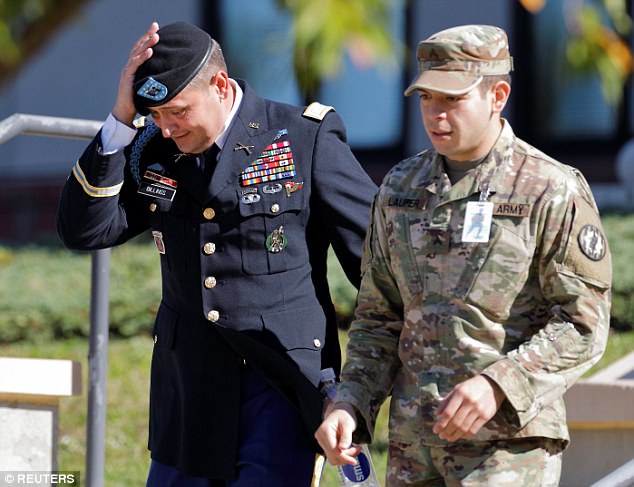 US Army Captain John Billings (left), Sergeant Bowe Bergdahl’s platoon leader at the time of his disappearance in Afghanistan, leaves the courthouse with an escort after testifying on the second day of sentencing proceedings in Bergdahl’s court martial