Bowel cancer is on the rise in the UK

Bowel cancer is on the rise among the under-50s in the UK, leading to calls to drastically lower the screening age.

Colon cancer cases among the group have risen almost two per cent in a decade, with the biggest rise coming in the those aged 20 to 39.

People are routinely screened for bowel cancer at 55 or 60 in England, with these checks thought to have sent rates of the disease falling in older people.

Public Health England has committed to screening which begins at 50, but international experts are now calling for this to be lowered yet further.

Bowel cancer is thought to be rising in younger people because of obesity, drinking and poor diets high in red and processed meat, while antibiotics given in childhood may also be a factor.

Bowel cancer rates in Britain among 20-39-year-olds have been steadily increasing since 1997 – but they’ve spiked since 2009, new figures show 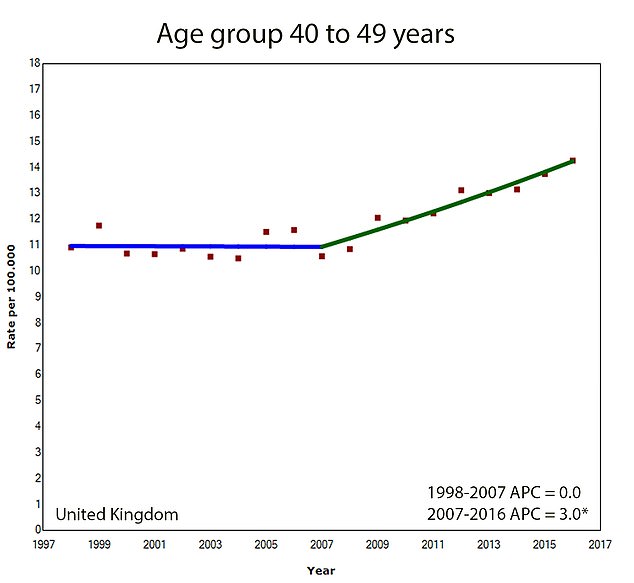 The new statistics come from two separate studies published in the Lancet Gastroenterology and Hepatology journal and the British Medical Journal.

The Lancet’s study, led by the International Agency for Research on Cancer, in France, found British rates of colon cancer rose 1.8 per cent among under-50s in the decade to 2014.

The BMJ researchers, led by Erasmus Medical Centre in the Netherlands, reported a rise in bowel cancer of 10.3 per cent a year between 2009 and 2016 for people aged 20 to 39.

Andrew Beggs, a consultant colorectal surgeon and Cancer Research UK advanced clinician scientist at the University of Birmingham, said: ‘I think this provides some evidence that we need to lower the age for screening.

‘In an ideal world we would start screening everyone at the age of 35 or 40, because I am now seeing a lot of people who are being diagnosed with bowel cancer in their late thirties.

‘Going down to 45 needs to be the starting point, although we must be aware that younger people may not carry out screening.

WHAT IS THE NHS’ BOWEL CANCER SCREENING PROGRAMME?

‘We are seeing more and more young people with bowel cancer, when we hardly used to see any, which may be due to obesity and poor diet but may also be influenced by greater awareness.’

When young people are diagnosed with bowel cancer, it is more likely to have advanced and spread by the time of diagnosis, which lowers their chances of survival.

But there is a dearth of reported figures on young patients, prompting two sets of researchers to analyse national figures for various countries including the UK.

The Lancet study found colon and rectal cancer rose by 1.8 and 1.4 per cent respectively in the decade to 2014 among under-50s.

The study suggests screening could be a factor in falling rates of bowel cancers among younger people, noting that the American Cancer Society has adopted guidelines calling for cancer screening from the age of 45.

It says obesity, a lack of fibre, red and processed meat could raise people’s risk of bowel cancer, with children given antibiotics seeing changes in their gut bugs linked to inflammatory bowel diseases which can lead to bowel cancer.

The authors of the BMJ study say rates of bowel cancer among people aged 40 to 49 rose by three per cent a year between 2007 and 2016.

Bowel cancer is the fourth most common cancer in the UK, with almost 42,000 people diagnosed every year. It is responsible for 16,000 deaths, around 44 a day.

‘Screening is the best way to diagnose bowel cancer early when it is treatable and curable.’

The bowel cancer screening programme was one of a three cancer treatment schemes slammed as ‘unfit for purpose’ last week by an influential panel of MPs.

Currently only around 60 per cent (2.6million people) of those eligible are screened every year.

Bowel cancer is a general term for cancer that begins in the large bowel.

Depending on where the cancer starts, bowel cancer is sometimes called colon or rectal cancer.

Bowel cancer is one of the most common types of cancer diagnosed in the UK.

Most people diagnosed with it are over the age of 60.

The main symptoms of bowel cancer are:

If you have one or more of the symptoms and they persist for more than four weeks, see your GP.

It’s not known exactly what causes bowel cancer, but there are a number of things that can increase your risk.

Diet – a diet high in red or processed meats and low in fibre can increase your risk.

Weight – bowel cancer is more common in people who are overweight or obese.

Exercise – being inactive increases your risk of getting bowel cancer.