A ‘fit and healthy’ husband repeatedly misdiagnosed with ulcers and acid reflux before doctors discovered a tumour the size of a beer coaster in his bowel has revealed the little-known symptom every man should know.

Matt Best, 39, was assured the intermittent stomach pain he had been experiencing for seven years was caused by ‘overindulgence’ in alcohol and rich foods until he insisted on further blood tests after becoming ‘extremely weak’ in the gym.

The result showed the Brisbane sales manager, who spent his free time working out and walking with wife Amanda and their dog, Kali, was anaemic – an early warning sign of bowel cancer often missed by doctors.

‘I remember even asking my gastroenterologist at the time jokingly, “it’s not cancer, is it?” And he said “at your age, highly unlikely”,’ Matt told Daily Mail Australia.

Matt Best (right, with wife Amanda) was assured the intermittent stomach pain he had been experiencing for seven years was caused by ‘overindulgence’ in alcohol and rich foods

A colonoscopy showed a 10cm tumour growing across the large intestine and on April 23, 2018, consultants confirmed the devastating news that he was suffering from stage 3C bowel cancer.

This meant cancer had spread to the tissue and lymph nodes surrounding the intestine, but not to nearby organs.

‘I remember just staring at a clock and not knowing what was happening.’

Then just 36 years old and in the prime of his life, Matt’s diagnosis proves cancer does not discriminate against age or fitness.

He is one of roughly 15,200 Australians diagnosed with bowel cancer each year, according to statistics from Bowel Cancer Australia, and among the 1,542 of those who are under the age of 50. 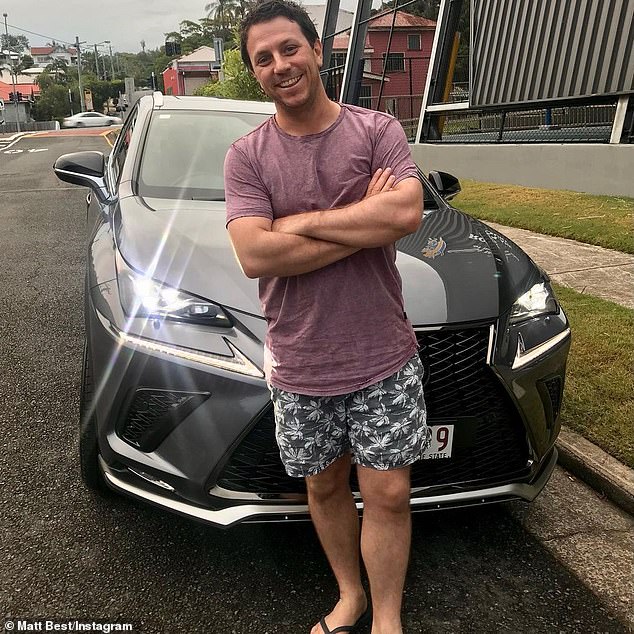 How anaemia can be a sign of bowel cancer

Anaemia is a condition where the blood does not make enough red bed blood cells, which are necessary to transport oxygen around the body.

Symptoms can include pale skin and brittle nails, chronic fatigue, heart palpitations, chest pain and discomfort or tiredness in the legs.

Anaemia is widely accepted to be caused by three things; the breakdown of red blood cells, blood loss, and decreased red blood cell production due to iron deficiency.

The latter can be an early warning sign of cancer that is often missed by doctors, because it can be caused by a plethora of other relatively harmless conditions including menstruation and pregnancy. However, iron deficiency is uncommon in men.

Anaemia can be a sign of bowel cancer because tumours release chemicals that stimulate the formation of new blood vessels. As the tumors grow, the vessel bursts, leading to the loss of red blood cells.

Bowel cancer is now the third most common form of cancer in Australia, only behind prostate and breast cancers.

It is expected that it will remain the third most common in 2021.

The early symptoms most bowel cancer sufferers feel are easily confused with everyday complaints, causing them to dismiss warning signs which can lead to lengthy delays in diagnosis.

Bloating, stomach cramps and once-off blood in the stool – all of which Matt experienced – can all have relatively innocent explanations, but symptoms that persist should be reported to a doctor as soon as possible.

The chance of successful treatment and long-term survival improves dramatically the sooner bowel cancer is diagnosed, which means early intervention can make the difference between life and death.

Doctors performed surgery which removed 30 of Matt’s lymph nodes, seven of which were infected with cancer, before starting him on a six-month course of FOLFOX chemotherapy which brought him to hospital every second Friday. 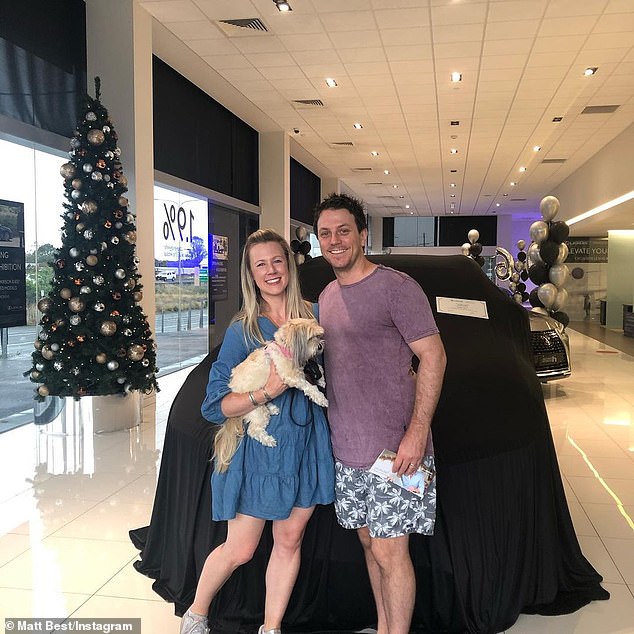 Matt (pictured with wife Amanda and their dog, Kali) said he feels a responsibility to raise awareness about bowel cancer, which claims the lives of 5,255 Australians each year

The treatment left him with a ‘chronic hangover’ of nausea and exhaustion, as well as peripheral neuropathy which causes pain, numbness and a ‘pins-and-needles’ sensation in the limbs.

‘I remember at Christmas my brothers thinking it was funny that I would constantly drop my beer bottle because my fingers would twitch from the nerve damage,’ he recalled.

Despite the debilitating short-term side effects, chemo proved successful and Matt  was declared cancer-free.

He said he will continue to have colonoscopies once a year to rule out the growth of new tumours, but for now at least his future looks bright.

‘It’s been a weird journey and an array of unexpected emotions,’ Matt said.

‘I’ve never felt so much support in my life and I am truly grateful to every friend and family member.’

Matt said he feels a responsibility to raise awareness about bowel cancer, which claims the lives of 5,255 Australians every year – 101 people each week.

He urged young men in particular to overcome their discomfort about seeing a doctor and discussing health concerns with friends.

‘There’s still such awkwardness,’ he said.

‘I try to lighten the mood and tell them a joke I came up with, which is “When I found out I had bowel cancer, I was gutted….” The response is always the same, only YOU can tell that joke!’

Matt said there is not reason to feel ashamed about asking for help or reaching out for support.

‘If it doesn’t feel right, get it checked! Better yet, don’t wait and have a regular check-up,’ he added.