A boxer who repeatedly stabbed a man so hard that the knife blade had to be surgically removed from his skull has been jailed for six and a half years.

Phillip Goodwin ‘snapped and saw red’ after seeing a picture on Facebook of his ex-girlfriend wife another man at the Beverley Racecourse Ladies Day, in East Yorkshire.

The 37-year-old attacker, from Kelderdale Close, Kingswood, went round to his partner’s caravan home at the Withernsea Sands Holiday Park to confront her, where he then saw the man in the picture sitting outside with her.

Goodwin then got into an argument with the pair before he launched a savage attack on the man, plunging a Stanley knife which he took out of his pocket into the man’s head and back.

Michael Greenhalgh, prosecuting at Hull Crown Court, said: ‘The victim had looked after the woman’s children whilst she had been at work, they were friends.

‘She came back home at 5pm and made a meal for them both whilst the children watched television.

‘At 11.55pm they were sat outside the caravan in the awning when the defendant appeared and confronted his former partner.

‘She said, “what the f**k are you doing here?”. He didn’t respond and pushed past her and went for the complainant.

‘He tried to attack him and fell into the pram where the youngest child was asleep. The complainant tried to get the defendant out of the awning but was attacked by Goodwin.

‘He was stabbed repeatedly with a Stanley knife in the back and head.’

It was only when Goodwin’s older daughter was woken up by the ruckus when he decided to stop his attack and flee the scene.

Paramedics and police by rushed to the scene on August 22.

The victim was taken to hospital where he underwent emergency surgery to remove the tip of the blade which had lodged between his brain and skull.

He was given five stitches in his head and 15 for the gash in his back.

Police arrested Goodwin the following day and he later pleaded guilty to wounding with intent.

Richard Thompson, defending, said Goodwin had never been in trouble with the police before the incident earlier this year.

Goodwin had grown angry about the lack of contact time he had with his children and lashed out when ‘frustration got the better of him’. He also claimed that Goodwin carried a knife as part of his work.

Mr Thompson said: ‘He is genuinely remorseful about the situation. He just snapped and saw red.’

Goodwin’s attack was described as ‘appalling’ by the judge, who sentenced him to six-and-a-half years.

Judge Simon Jack said: ‘Your victim was left with multiple stab wounds on his back and two injuries to his head, one of which penetrated the skull and the blade broke off and had to be surgically removed. 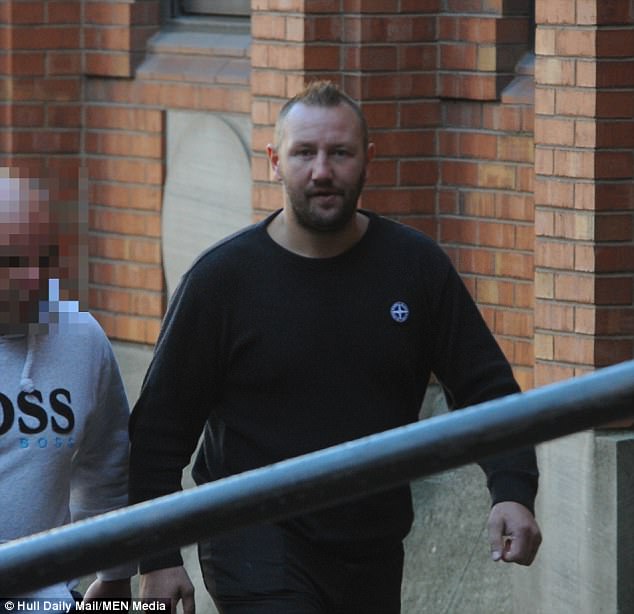