Insanity in the Hunter as boxer lobs up to weigh-in wearing undies with his wife’s picture on them then tries to start a fight over a birthday cake stunt. Meanwhile a bloke in a Hannibal Lecter mask reckons his opponent is ‘different’

If the main events on the boxing card at Newcastle on Saturday are even half as entertaining as the antics in the lead-up, punters are going to be in for one heck of a show.

The official weigh-ins were held today for the Super Saturday boxing festival to be held at Newcastle Entertainment Centre tomorrow night.

The event will feature 20 fights staged over 10 hours including the main event between Sam Eggington and Dennis Hogan for the IBO light middleweight world title. 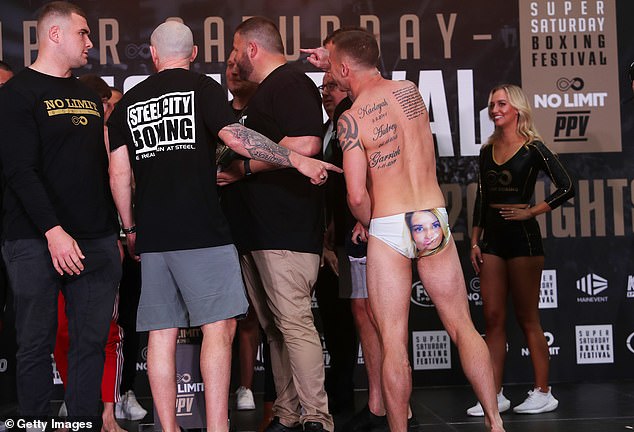 Minto, wearing undies with his wife’s picture on them, was rather upset at the birthday stunt

However it was the antics of the undercard fighters that have drawn all the attention in the lead-up.

It started with New South Wales boxer Blake ‘The Machine’ Minto striding out onto the stage wearing a pair of jocks with his wife’s photo printed prominently on his rear end.

That was weird enough, but Minto [pictured with his wife below] was walking into an ambush.

The local hope will celebrate his 30th birthday on Saturday and his Irish opponent Darragh Foley was waiting with a celebratory cake for him.

‘Happy birthday to you …,’  Foley crooned as he tried to wrap his arm around his opponent.

Minto was having none of it, trying to start the fireworks early before storming off the stage in a huff, which was hilarious with the image of his wife on his undies.

‘That’s what you call a party pooper,’ Foley said.

‘It’s his birthday, look at this, look at the hassle I’m having to go to.

‘I’ll have his cake. Hey Blake, this was for you mate. Come back on stage and share a slice of cake.’

Foley had also offered Minto a lottery ticket after the Aussie said he would donate half of his winnings to a mental health charity.

‘I watched a video and he’s saying if he knocks me out, he’s going to be very nice and going half of it to give it to mental health,’ Foley said.

‘Something that’s never, ever going to f***ing happen. So I wanted to put it into comparison by buying him a lotto ticket.

‘Plus it’s his birthday as well. It’s not every day you’re 30 years old. I wanted to give him an early birthday present.

‘I’m going to give him his birthday bashings on Saturday, you can be sure of that. But I wanted to give him an early birthday present. That’s how it came about. He has as much chance as winning the lottery.’ 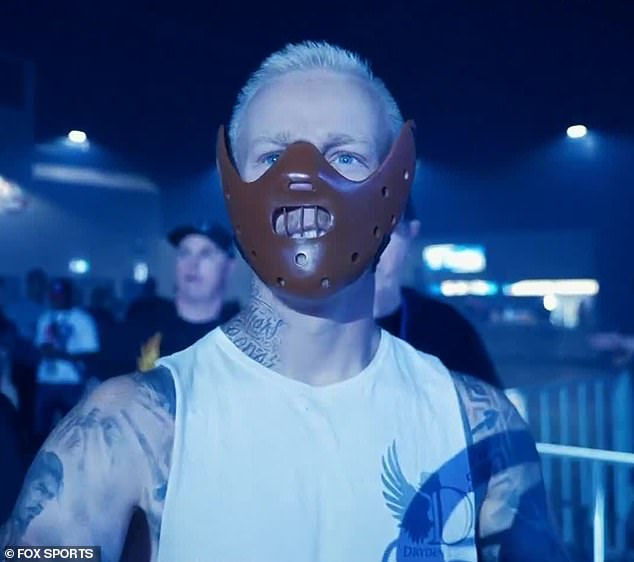 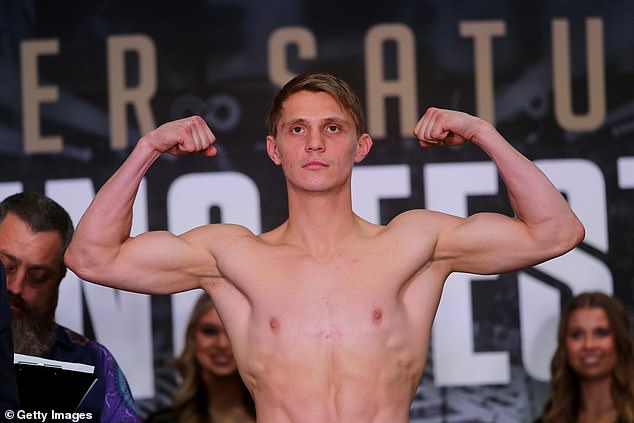 Another feature fight on the card is local hope Nikita Tszyu, brother of Tim Tszyu and son of former champion Kostya Tszyu.

Nikita has admitted to enjoying a diet of liver and also has a fetish for making other people bleed – which is all a bit weird for his opponent Darkon Dryden who likes to wear a Hannibal Lecter mask into the ring.

Dryden said that Tszyu is ‘a different dude’.

Tszyu himself admitted there had been some restless nights leading into the bout, but he was feeling relaxed and ready to rumble.

‘All the hard work has paid off. The stressful nights, the overthinking, that’s all in the back of the head. Now it’s the easy part. It’s the putting things into practice mode.’