A boxer who had sex with his love rival’s girlfriend before stabbing him to death was yesterday sentenced to life in prison for murder.

Ashley King, 29, stabbed 25-year-old doorman Gareth Atkinson in the neck using a pick-axe handle embedded with 40 screws in the doorway of Jade Walker-Saunders’ flat in Huddersfield, West Yorkshire, on May 8 this year.

The murder followed a two-year-long feud between both men over Saunders and another woman, Shaunie Haig, which saw them exchange hundreds of texts containing violent threats and claims of infidelity. 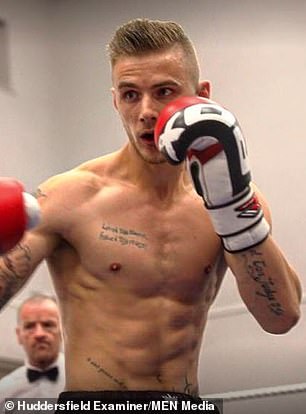 Mr Justice Nicklin said the threats would have left Atkinson, from Meltham, ‘genuinely fearing for his life’ on the day he died, as he sentenced the thug to a minimum term of 17 years in jail at Leeds Crown Court.

The court previously heard how, on the day he died, Mr Atkinson feared Miss Walker-Saunders had been having sex with King ‘all’ of the previous night after seeing a photo of her performing a sex act on another man.

At this point, Miss Walker-Saunders rang King on Facebook ‘in hysterics’ claiming Mr Atkinson had assaulted her and smashed her phone. Neighbour Mr Beaumont told the jury that at one point he heard her say to a man: ‘Get off me, I don’t deserve this.’

She and King returned to the flat shortly before Mr Atkinson showed up at around midnight. He had received death threats from King that night and did not expect him to be there, the court heard.

King, of no fixed address, then stabbed him through a gap in the door. His claim to have been acting in self-defence after Mr Atkinson tried to barge into the flat was rejected by a jury. 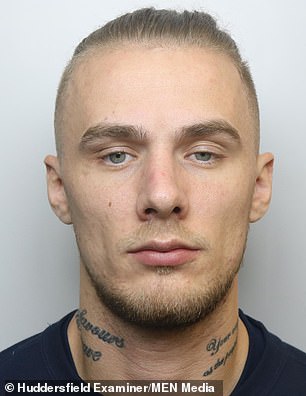 King, of no fixed address, stabbed Mr Atkinson through a gap in the door. He is pictured in a police mug shot

Sentencing, Justice Nicklin told King: ‘It’s clear that you and Mr Atkinson did not like each other. From the text and social media messages I have seen you made the running and fuelled the dispute between you.

‘I’m sure Mr Atkinson spent the last day of his life genuinely in fear that you were going to attempt to kill him. You stood outside the flat brandishing a truly horrible homemade weapon.

‘It was a pick axe handle and you had embedded some 40 screws in the upper third. The weapon was designed by you and if used would have created the most horrific injuries.’

The judge rejected his claim that he intended to defend himself and that his threats to harm Mr Atkinson were just words as he only intended to settle their differences in the boxing ring.

He also stated that King’s past convictions, including two robberies, highlighted his willingness to arm himself with knives.

‘It is clear that Mr Atkinson was scared by your actions that afternoon and took your threats seriously.’

The packed courtroom heard heartbreaking statements from Mr Atkinson’s parents, Michael and Helen, and his sister, Kirsty, who told of her devastation at her brother missing her wedding a few months after his death.

‘I will never get over this,’ she said. ‘We would speak every day and now all I have is memories. This is my life now. No sibling, no uncle if I ever have children. I’ll never see him get married or be a dad. I’ll never get him back.’ 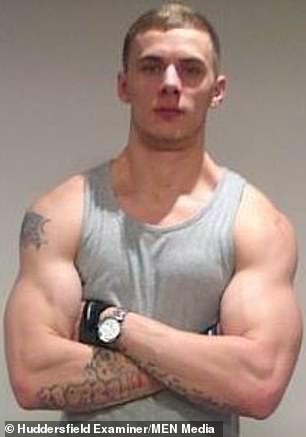 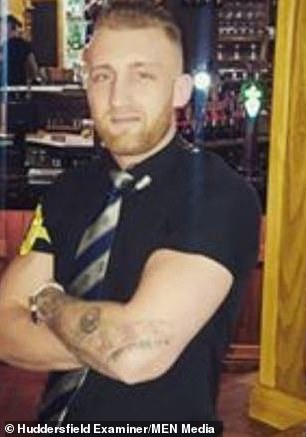 King’s (left) claim to have been acting in self-defence after Mr Atkinson (right) tried to barge into the flat was rejected by a jury.

Mr Atkinson’s father, Michael, said he had lost his best friend as well as his son and his loss was never ending.

His mother, Helen, said: ‘No parent should ever have to bury their child. Every day is just another day, all merging into one.

‘Exhaustion is the only way I sleep. When I do sleep I dream of my son Gareth, I wake up and for split seconds I believe he’s still alive. But the reality kicks in and my heart aches.’

‘King tried to evade the police and not take responsibility for what he had done,’ he said.

‘The violence King displayed towards Gareth is appalling; both verbally and through social media and his despicable actions on May 8, which resulted in Gareth suffering a fatal stab wound which he was unable to survive.’ 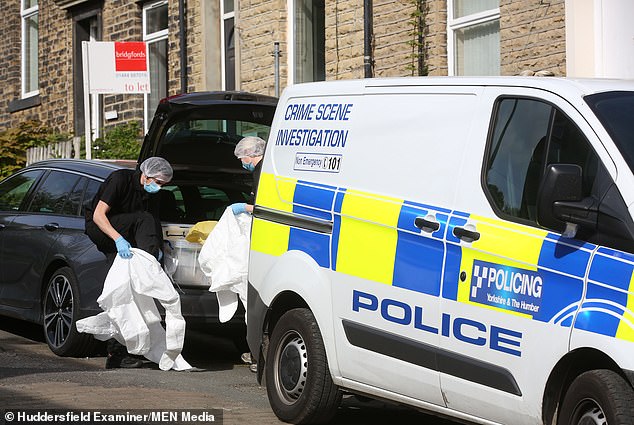 Police outside Miss Walker-Saunder’s flat, where the murder happened on May 8 this year

Mr Atkinson’s family added in a joint statement issued by West Yorkshire Police: ‘Our loss is immense and is also not felt by us but by the many friends and colleagues he had.

‘We respect the findings of the court and wish to extend our thanks to all those responsible for bringing the case to its conclusion.

‘The loss of Gaz is forever, that is our sentence and there isn’t a day that passes that we don’t miss and long for his company.’