Boy, 1, thriving after groundbreaking surgery in the WOMB to treat spina bifida

Before he was born in January 2018, Charley Royer underwent a groundbreaking operation to treat the beginnings of spina bifida.

The birth defect, which can render a person quadriplegic, can be detected and treated during pregnancy, but opening the uterus puts the baby at risk of premature birth – and potentially more complications.

But his parents, Lexi and Joshuwa Royer, were given the option to try a new technique developed by surgeons at Texas Children’s Hospital, with doctors in Barcelona.

They pulled Lexi’s uterus out of her belly, but instead of slicing it opened, they made small incisions to insert cameras and tools, to fuse the base of the fetus’s spinal column back together.

California childhood sweethearts Lexi and Joshuwa were ready to try everything that might help their baby, after suffering a miscarriage, struggling to conceive again, then getting the news that their son would likely be severely disabled.

The September 2017 operation, reported and shot by the New York Times, was a success.

And now, in a new Times feature out today, Charley is displaying the fruits of that surgical technique — known as fetoscopic repair — by walking, talking, and showing signs that he will have bladder control, unlike most with spina bifida.

‘I didn’t think it would be so positive, so happy,’ Lexi, 29, told the Times, explaining that doctors predict he will hit all his cognitive milestones, and that he will walk unaided, it may just take some time.

Charley is displaying the fruits of that surgical technique — known as fetoscopic repair — by walking, talking, and showing signs that he will have bladder control, unlike most with spina bifida. Pictured: Charley with his parents Lexi and Joshuwa

Every year around 1,500 babies in the US are born with spina bifida.

Most cases are detected at a 20-week scan.

The most common and most serious form of the disease is called myelomeningocele.

In patients with myelomeningocele the spinal column remains open along the bones making up the spine.

‘Our days are just so normal. I wish I could have had a crystal ball then and seen how we are now. If I just could have known that everything was going to be OK. If I could have seen him sitting here, playing now. I could have saved myself so many tears.’

It’s a result doctors hoped for but couldn’t bet on.

When Charley’s condition first became apparent on the 13-week scan, Lexi and Joshuwa were advised to consider abortion.

His case was so severe, they said, he would likely face a very poor quality of life.

Spina bifida is incredibly difficult to treat, in part because by the time it is detected, damage is already being wrought.

It affects 24 babies in 100,000 and has been associated with B-vitamin folic acid deficiency.

It is a condition that describes an abnormality of the neural tube, which develop into the spinal cord and brain. Part of the tube does not form properly or there is incomplete closing of the membrane and bones, leaving the spinal cord exposed.

As pregnancy progresses, the amniotic fluid surrounding the fetus becomes increasingly toxic to the delicate nervous tissue as fetal waste material accumulates, worsening the condition and its consequences.

It is generally too late to operate after birth and children with spina bifida are often unable to walk, may need catheters to pass urine and are at risk from brain damage because of a fluid-build up in the brain which may need a shunt implanted under the skin of the skull to drain it.

Charley’s was spotted at his 13-week scan in May 2017, it was repaired at six months, when he was just 24 weeks and two days old and weighs less than 2lb. He was then carried to term, being delivered naturally in January 2018.

But even in that small window of time, as he grew in Lexi’s womb, the exposed nerves were subject to damage.

Since the 1990s, ‘open surgery’ on babies with spina bifida has been performed with mixed success.

It requires a 6cm incision made into the womb to access the child. However, the procedure has been linked to premature births and other harmful side-effects — such as poor healing of the uterine scar — for mothers who must give birth by cesarean section in case of womb rupture during labor. 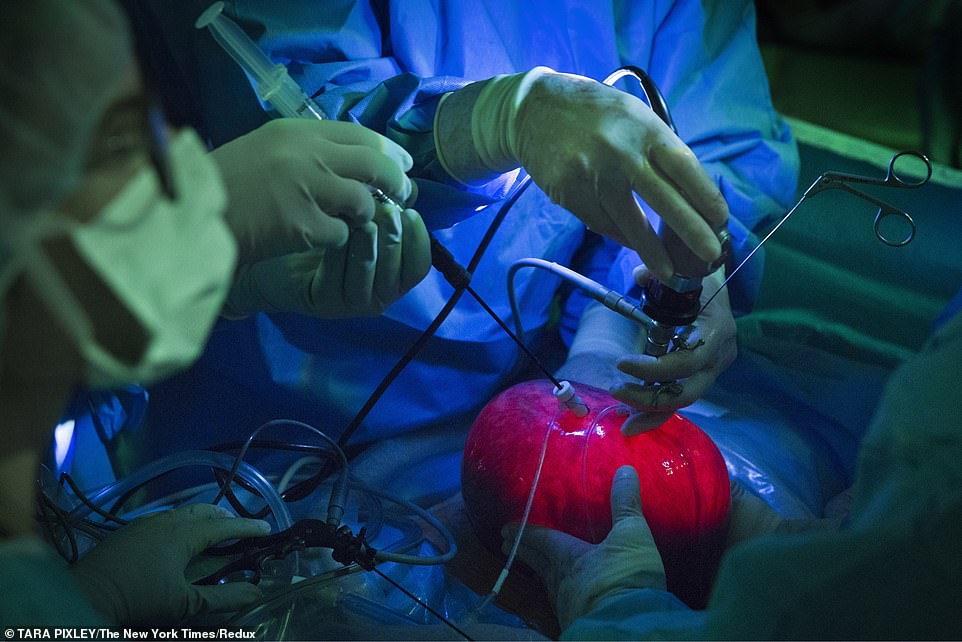 The surgeons briefly removed Lexi’s womb — intact and still attached to her via muscle, blood vessels and connective tissue — and performed surgery through tiny incisions in its side

With country and western music playing in the background — at Mrs Royer’s request, although she was under anesthetic by then — Dr Belfort began the operation, with 10 doctors in the theater and numerous specialist nurses on hand, sweating in temperatures raised to keep the baby’s heartbeat up.

Every few minutes, the pediatric cardiologist called out the heart rate — which held steady at 150 beats per minute.

Once the womb was removed and held steady by two doctors just above the cavity, the amniotic fluid was drained from it and carbon dioxide pumped in to keep it expanded and enable the surgeons to move inside it more easily.

An anesthetic injection was then administered to the baby, although it is not known if, or how much, it would feel pain.

Guided by the images showing up on the monitors around them, and working with infinite care, the surgeons made a series of tiny snips in the skin along both sides of the baby’s body to loosen it so it could be tugged up and over to cover the exposed spinal cord.

The skin flaps were then sewn up with five minuscule stitches to ensure that amniotic fluid, regenerated as the pregnancy continued, didn’t leak in.

Finally, after almost three hours, saline solution containing an antibiotic was pumped into the womb before it was gently replaced inside Lexi’s abdomen and her wound sewn up.

Lexi and Royer searched online and found news of a new technique, developed by Dr Michael Belfort, chief obstetrician and gynecologist at Texas Children’s Hospital in Houston, and his colleague, Dr William Whitehead, a pediatric neurosurgeon, allowed them to briefly remove the womb — intact and still attached to the mother via muscle, blood vessels and connective tissue — and perform surgery through tiny incisions in its side.

The procedure took three years to develop in collaboration with doctors in Barcelona.

The two surgeons perfected their technique by practicing with a rubber football — replicating the womb — which contained a doll covered in chicken skin, which acted as the baby.

Dr Belfort and his colleagues have now performed 28 such operations at between 24-26 weeks of pregnancy — with no deaths — since 2014, as reported in the journal Obstetrics & Gynecology. Charley’s was the first reported.

It is not guaranteed, but very likely, that Charley will require more surgery as he grows, and his body develops around the scar tissue protecting his nerves, which could tug at them.

Joshuwa is certain that, no matter what hiccups lie ahead, Charley will be active and independent, telling the Times: ‘I imagine him one day in the yard with me, teaching him stuff, working on stuff, being self-sufficient, fixing cars and stuff around the house.’

Lexi candidly told the Times about the emotional turmoil that follows enduring such a sensitive surgery with your unborn child, describing ‘flashbacks to the diagnosis’ and waking up crying six months after Charley was born, even though he was doing well.

‘I was overwhelmed, and so tired,’ Lexi said, adding: ‘At the time, I just had to get through it. Then I was reliving it.’

Like all parents of children with a disability, they are now contemplating how to broach this delicate, nuanced and complex part of Charley’s identity with him.

‘I think about it all the time,’ Joshuwa told the Times. ‘But I don’t want to bore him, or limit him, or create a disability in his mind. We don’t want this to be his identity. And we don’t want to pour into him what we went through.’