A 10-year-old Ohio boy has been charged with felony fleeing and eluding after allegedly leading police and state troopers on a 45-mile pursuit that reached speeds of 100mph because he was ‘bored’.

Erie County Prosecutor Kevin Baxter says a judge will hold a hearing Friday to determine if the boy should remain in a juvenile detention center.

The boy took his mother’s boyfriend’s car from his Cleveland home on Thursday and led police on a high-speed interstate pursuit that continued with state troopers chasing him on the Ohio Turnpike, according to authorities. 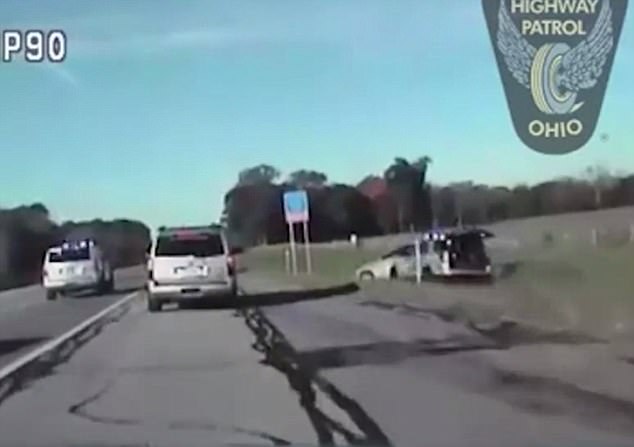 As the officers maneuver around a tractor-trailer, an officer finds an opening allowing him to intentionally hit the car (right) in order to bring it to a stop

Dashcam video from the Ohio State Highway Patrol shows the car being driven into a ditch to avoid spike strips, and continuing on the opposite side of a metal barrier as the driver flees the officers.

The pursuit ended when a trooper nudged the car into a sign on a grassy berm and prevented it from returning to the roadway.

Officers raced to the car and demanded the boy roll down the window and get out, as seen on video. 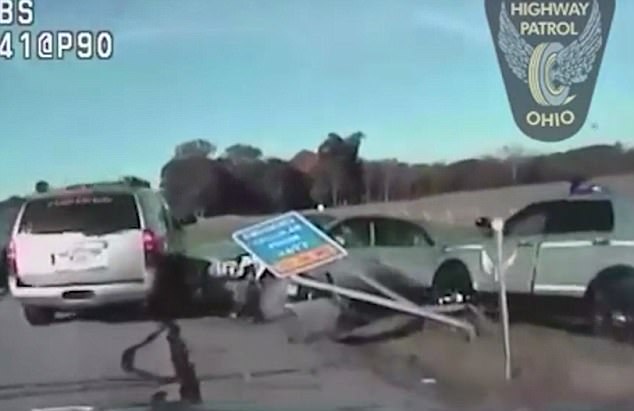 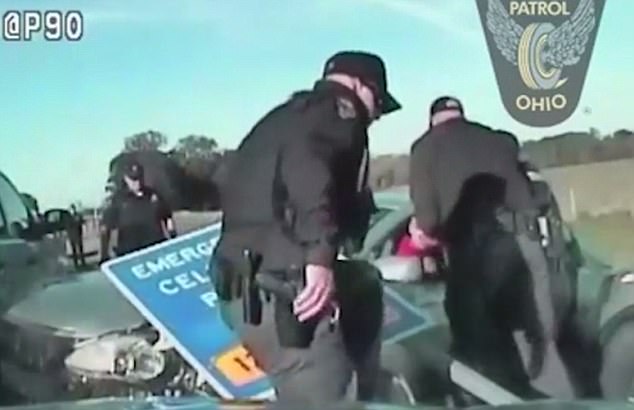 Troopers are then seen pulling the boy (pictured in red) out of the car through the window. He kicked at the troopers and spit on them off camera, state patrol Lt Richard Reeder said

He allegedly kicked at the troopers and spit on them off camera, state patrol Lt Richard Reeder told Cleveland.com.

The boy also told officer he stole the car because he was ‘bored’ while waiting for his sister to take him to school that morning.

His mother’s boyfriend called police and his mother jumped in her car and followed him.

At one point, a trooper pulled up next to the boy and motioned for him to stop. The boy shook his head and sped up, police told the news outlet.

The chase ended at 9.49am, about an hour after he took off. No one was injured in the incident and no other cars were damaged during the chase.

His mother told police that it was the second time her son took a family member’s car for a joyride in two weeks, according to Cleveland.com.

The other incident took place on October 16. But he didn’t get far because the car had three flat tires.