Boy, 16, is arrested after two people were stabbed in Lancashire

Boy, 16, is arrested after two people were stabbed and another teen robbed at knifepoint in ‘linked’ incidents in Lancashire

A 16-year-old boy has been arrested after two people were stabbed and another teen was robbed at knifepoint in Lancashire today.

Lancashire Police say that they are treating the incidents – which all happened in Deepdale, Preston – as being linked at this stage.

The first incident took place at around 3.45pm when a man in his 50s was approached by an unknown male at Sainsbury’s in Deepdale and was stabbed in the abdomen.

He is currently in hospital undergoing surgery, however his injury is not believed to be life threatening.

Later on at around 6.45pm, a woman in her 20s contacted emergency services explaining she had been assaulted in the vicinity of Blackpool Road.

She has been taken to hospital to be treated for a single stab wound to her abdomen.

It is unknown at this stage, whether she had anything stolen from her.

The final incident happened around five minutes later, with a teenage boy reporting he had been threatened with a knife and had his bike stolen on Deepdale Retail Park. 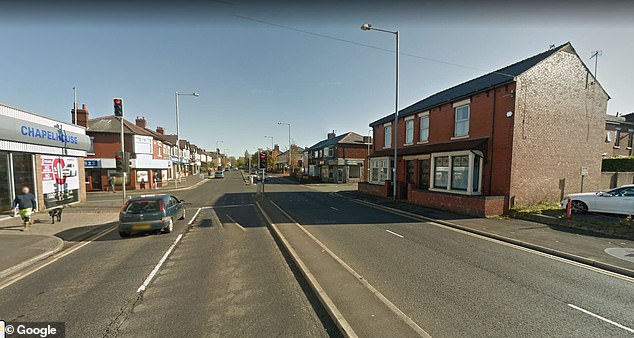 Later on at around 6.45pm, a woman in her 20s contacted emergency services explaining she had been assaulted in the vicinity of Blackpool Road (pictured)

A police spokesperson said: ‘A 16-year-old boy from Preston has been arrested on suspicion of attempted robbery, robbery and section 18 wounding. He is currently in police custody.

‘As a result of these incidents, patrols have been increased in the area and a section 60 order will be in place tonight.’

Inspector Phil Orme of Preston Police said: ‘These are very serious incidents where violence or threats of violence have been used.

‘The incidents have been confined to a small geographic area and have been very similar in nature. At this stage, we believe they are linked.

‘While we have made an arrest, our enquiries are very much ongoing.

‘If you witnessed any of these crimes taking place or have any information at all that could help, please get in touch as soon possible.’

Anyone with information should call 101 quoting log number 1152 of January 26.