Yousef Ghaleb Makki from Burnage, who was knifed to death in Hale Barns on March 2

A 17-year-old boy has today been found not guilty of the murder of a grammar school pupil who was stabbed in the heart with a flick-knife.

Yousef Makki was stabbed to death in Hale Barns, an upmarket village in Cheshire, in March.

The 17-year-old, who was from a single-parent Anglo-Lebanese family from Burnage, south Manchester, had won a scholarship to the prestigious £12,000-a-year Manchester Grammar School.

The defendant, boy A, and another boy, 17, boy B, both from wealthy Cheshire families, were cleared of all charges following a four-week trial at Manchester Crown Court.

Neither of the defendants can be named as they are aged under 18.

The stabbing was an ‘accident waiting to happen’ as all three indulged in ‘idiotic fantasies’ playing middle class gangsters, the jury heard.

Despite the privileged backgrounds of both defendants, they led ‘double lives’.

Calling each other ‘Bro’ and ‘Fam’ and the police ‘Feds’, the defendants and Yousef smoked cannabis, road around on bikes, ‘chilling’ and listened to rap or drill music.

They would post videos on social media, making threats and posing with ‘shanks’ or knives.

Yousef had won a scholarship to the prestigious £12,000-a-year Manchester Grammar School. Right, his father Abu Yousef Makki outside court in June

Teenagers walk from court as they are cleared of murder

Boy A denied murder on March 2, claiming he acted in self-defence.

He admitted perverting the course of justice by lying to police and possession of a flick knife.

Boy B, was cleared of perverting the course of justice by allegedly lying to police about what he had seen but also admitted possession of a flick knife.

Both were also cleared of conspiracy to commit robbery in the lead up to Yousef’s death.

Both defendants still face sentencing for possession of the flick knives, purchased by boy B from an app called Wish, and boy A also faces sentence for perverting the course of justice.

Boy A puffed out his cheeks and closed his eyes as he was cleared by the jury forewoman and was then hugged by his tearful family in the public gallery at Manchester Crown Court.

In another part of the pubic gallery Yousef’s father, Ghaleb Makki, exploded in fury and the judge, Mr Justice Bryan, cleared the courtroom.

A voice was heard saying: ‘Are you joking?’ as the not guilty verdicts were delivered.

The court heard how hours before the stabbing, Boy B arranged a £45 cannabis deal and the teenagers planned to rob the drug dealer, a ‘soft target’.

But the robbery went wrong and Yousef and Boy B fled, leaving Boy A to take a beating.

Boy A then later pushed Yousef who called him a ‘p****’ and punched him in the face.

Boy A broke down in tears telling the jury: ‘I got more annoyed. I [took] it out straight away, I don’t really know what I did, kind of lifted my arm up. I didn’t realise anything had happened at first.’

As the victim lay dying, the panicking defendants hid the knives in bushes and down a drain, dialled 999 and tried to staunch the blood pouring out of Yousef’s chest wound.

A passing heart surgeon performed emergency surgery in the back of an ambulance but Yousef suffered catastrophic blood loss.

They told police scrambled to the scene they had found Yousef stabbed and suggested others were responsible.

The jury also saw social media videos of Boy A posing and brandishing knives and machetes.

Nicholas Johnson QC, prosecuting, said the videos showed him ‘acting out something that ultimately led to the death of Yousef Makki’.

‘He was too quick to reach for his knife and too quick to use it, probably because it was a move he had practised for so long. 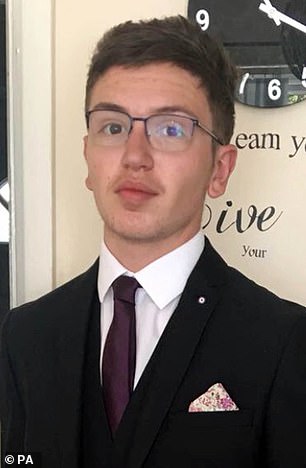 ‘It was a petulant, malicious response of a wannabe hardman who had lost face and could not get his own way.’

Jurors also heard from another youngster who said at a house party he was beaten by a gang of boys including Boy A, who then pulled out a knife.

A second youth present at the time, told the jury: ‘I don’t think many of the people in that situation had experienced that, I think everyone was shocked by the situation and stopped what they were doing.’

He added: ‘In my day you went around with long hair calling everyone ‘man’.

‘If they were dropped off in one of the rougher areas of Manchester…It’s fine being a gangster in Cheshire.’