Boy, 19, whose scoliosis-ridden spine was ‘crushing him to death’ stands tall after operation

A 19-year-old with life-threatening scoliosis that nearly made his spine ‘collapse’ can finally stand tall after spending the first 17 years with a back painfully twisted into a question mark-shape.

John Sarcona’s spine began bending in two different curves when he was five.

The condition twisted his back so severely that his skeleton was in danger of crushing and damaging his internal organs.

After spending his childhood and most his teenage years in excruciating pain, John had a 13-hour corrective surgery, during which doctors slowly stretched his spine straight.

After 17 years, John Sarcona, now 19, can finally stand tall (left). John’s spine twisted both side to side and forward due to severe scoliosis and kyphosis (right) until he had corrective surgery

By then, John was no stranger to surgery. His spine started bending when he was five – and since then he had had 18 surgeries – one every six months to counteract his spine’s changes.

In between operations, John wore a special plastic brace, practically holding his body in place to be sure he maintained enough mobility to bend down or run.

But once he hit puberty, the contortion of his spine accelerated.

John has two types of spinal abnormalities: scoliosis and kyphosis.

Scoliosis, the more commonly known of the two, causes the spine to curve in an ‘S’ shape, from side to side. 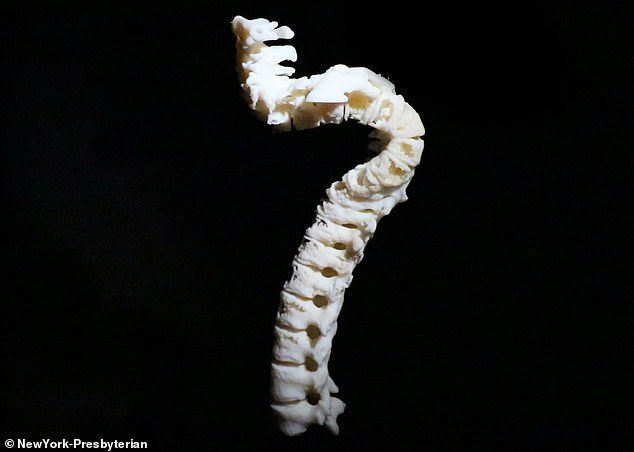 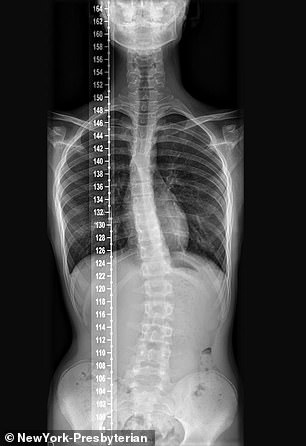 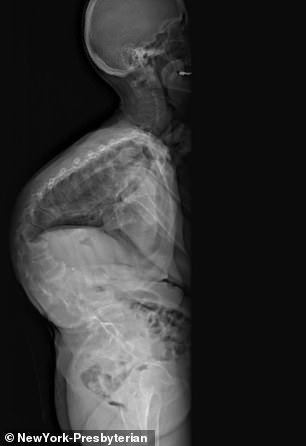 Kyphosis is unusual among young people, but common among the elderly.

Also colloquially known as hunch back, the condition causes the back to curve in a ‘C’ shape, most often creating the appearance that someone is slumped forward.

In John’s case, the two conditions were working in tandem to push and pull different areas of his spine backward, forward, left and right – as if his bones were an aluminium can.

To try to control the condition’s progression, John was fitted with a hard plastic brace that had to be strapped tightly around him and worn 18 hours a day.

His mother, Joanne, wasn’t happy either.

‘I used to hate putting it on him,’ she says. 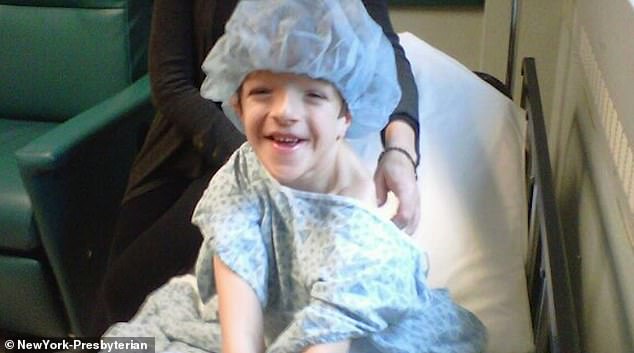 John was diagnosed when he was just five, and had 18 surgeries over the following 12 years 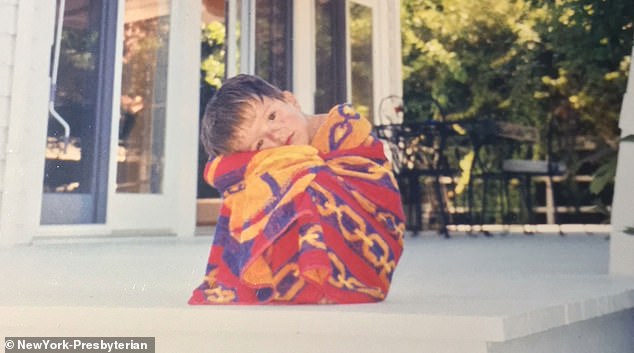 He was a small but active child, but as his spine bent, it began to take a toll on John’s social interactions and mental health as well

‘He was such a little tyke. All the time, he’d ask, “Can I take it off, Mommy?” when he’d go play with his brother or friends or when he was tired of wearing it all day. We thought it was only going to be for a short period of time and then it would be over.’

An avid sports fan, he didn’t let his condition or the medieval-seeming tools to manage it stop him from playing himself.

Semi-annual surgeries to adjust a series of rods in John’s back were supposed to stabilize him and slow the curving of his spine.

But by age 16, he could hardly get enough air to walk across a room, let alone sprint down the basketball court for a layup.

A year later, his Joanne saw a spot of blood on the back of one of John’s t-shirts as she was dong laundry. Alarmed, she asked him to show him her back as soon as he returned home with his father. 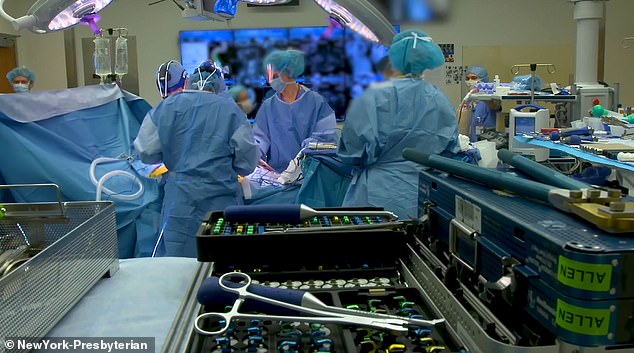 Doctors had to take apart, straighten and reassemble John’s spine in a 13-hour surgery in 2016 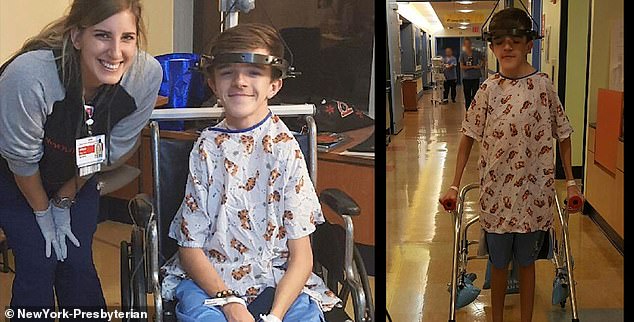 With the help of halo traction to stabilize his skeleton, John was up and walking in just 3 days 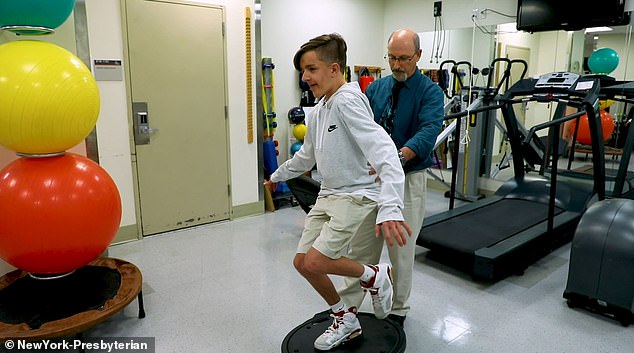 With the help of physical therapy, John quickly regained his strength

His back was turning so fast and so forcefully that the metal rods couldn’t stop it. In fact, as his spine had changed, the rods had been wrenched into new angles, puncturing through his skin and sticking out of John’s back.

Infection was developing around them.

‘They were black and looked like tumors,’ his mother recalls.

What’s more, John’s oxygen levels were extraordinarily low. So low that when the family called their doctor, he said to skip his office, skip the ER and go straight to another specialist.

John’s back was curving forward toward being a right angle. By the time he saw Dr Lawrence Lenke at New York-Presbyterian, his spine was curved at 140 degrees.

John’s his skeleton was ‘bending by the hour,’ Dr Lenke’s team told the Sarcona family.

As it did so, it was placing enormous pressure on and compressing his heart and lungs.

‘Basically, he was being crushed to death,’ John’s mother said. 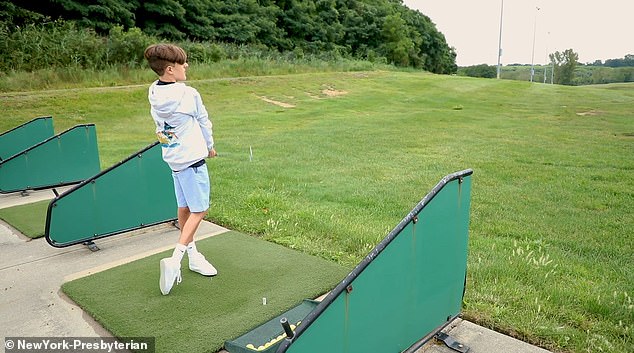 Now he can play the sports he loves, like golf, without excruciating pain 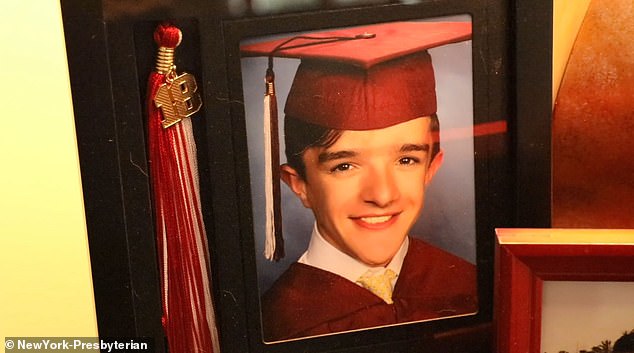 In  May, he walked proudly across the stage at his high school graduation 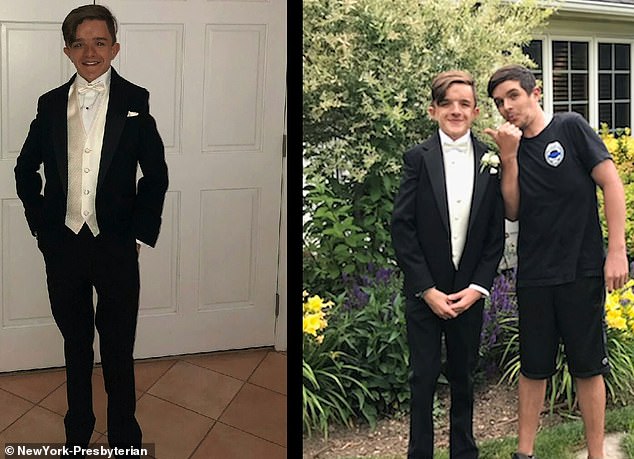 John even strutted his stuff in a custom-fit tuxedo for senior prom in May (lfeft and right, with his brother)

‘If they had waited a few more weeks to come to the hospital, John wouldn’t be here,’ Dr Lenke says.

There was no time to lose. John’s new team of doctors fitted him with halo traction, a metal ring that goes the head, adjoined to rods and a shoulder frame to stabilize his body and slowly begin lengthening his spine.

The relief was almost instant, and over six weeks, Dr Lenke and his team nurse John back to health, so that he gained 10 lbs and the curve in his spine wasn’t quite as tight.

Then, on December 8, 2016, the surgery began. John’s spine had to be taken apart, realigned and put back together again – all without severing or disrupting the all-important spinal cord.

After 13 hours of delicate operation – one of the longest such surgeries Dr Lenke had performed – John’s s spine was a whole new shape and his blood supply and nerves all seemed to be in working order.

Incredibly, after just three days in the ICU, the resilient young man was back up on his feet, walking around.

Two years later, John hasn’t wasted a moment of his newfound mobility and physique. He bikes, golfs and plays basketball.

And he stands taller.

‘I remember looking in the mirror and thinking, “Wow, is that really me?”‘ It felt good to see myself standing up so straight,’ John says.

He attended senior prom looking dapper in a custom-fit tuxe, and walked the stage at his high school graduation in May.

John is just thrilled to focus on his longer-term future – namely, college – rather than the surgeries that were always looming no more than six months ahead.

‘Seeing him go to prom, walk across the stage at graduation, his beautiful golf swing, going to college … my heart just breaks open,’ says Joanne.