Boy, 2, survives five-storey fall after being caught by neighbour

Boy, two, survives a five-storey fall unhurt after a brave neighbour caught the child with his bare hands

A Chinese boy who fell from a five-storey ledge by accident has survived unscathed thanks to a courageous neighbour.

The two-year-old from eastern China made several spins during his 50ft fall before the heroic saviour caught him bare-handed.

The child had climbed out of his home and ended up on a small platform before losing his grip and dropping from heights, local authorities claimed. 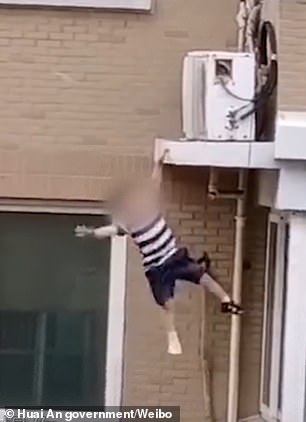 The boy had allegedly climbed to the platform, which supported an air-conditioning unit, after crawling out of the balcony.

He was said to have resort to act out of desperation after accidentally locking himself in and feeling scared.

An official post said that he was unharmed after being caught by the neighbour, who sustained minor injuries on his arms as a result.

The boy’s fall was broken briefly by a plastic awning before he landed in the man’s arms safe and sound. 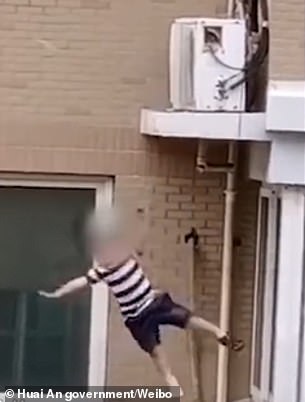 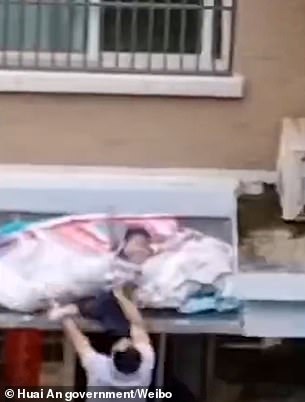 The social media video shows the child making several spins during his 50ft fall before being caught by the saviour with his bare hands last Thursday in Xuyi County, Jiangsu Province

The accident took place last Thursday in the county of Xuyi in Huai’an, Jiangsu Province.

Footage released by the local government on Twitter-like Weibo shows the boy trying to cling onto the ledge for about 10 seconds before being forced to let go due to a lack of strength.

He spun at least 720 degrees in the air during the high-speed fall and hit the awning briefly.

The saviour, who had been following the child’s movement closely, then caught him with his bare hands while standing on a stool.

Several other bystanders had put duvets on top of the plastic shelter to protect the boy should he land there.

The child was taken to a hospital and found to have no injuries, according to the propaganda department of Huai’an, which released the video on its social media account. 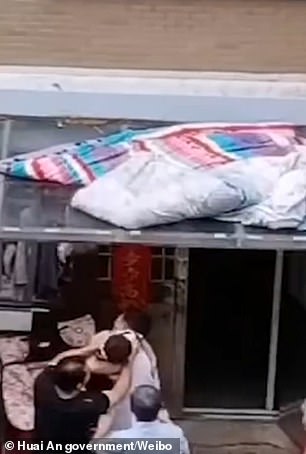 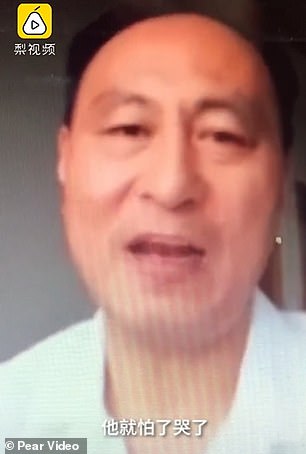 The child was taken to a hospital and found to have no injuries, according to the propaganda department of Huai’an. The saviour (right) sustained minor injuries on his arms as a result

The brave neighbour, named Li Dehai, told local reporters that the boy had managed to lock his grandmother out of their home.

He said the accident occurred when his grandmother had gone to find a locksmith to open the door.

‘The boy was scared [after being trapped on the platform], and his neighbours yelled for help after spotting him,’ Mr Li told video news outlet Pear.

Mr Li shouted at the boy telling him not to move while calling the police.

The Good Samaritan said he saved the boy ‘out of instinct’.

‘We could not see him falling from the building without doing anything,’ he told Pear. ‘It happened so quickly. I did not have other thoughts at the time but to save him.’

Mr Li said he suffered bruises on his arm as a result and was recovering.