Police in suburban Atlanta say a five-year-old boy shot and killed his 12-year-old brother with a loaded gun he found in the woods over the weekend and mistook for a toy.

Griffin police found the 12-year-old suffering from a single gunshot wound to the chest just after 7.40pm on Saturday evening in the 600 block of Hammock Street, the department said in a statement.

First responders performed CPR and the boy was taken to Wellstar Spalding Regional Hospital where he later died.

Police in Griffin, Georgia, say a five-year-old boy shot and killed his 12-year-old brother at his home on Hammock Street after finding a loaded gun in the woods The five-year-old told investigators he thought the gun was a toy and fired at her older brother, striking him in the chest as the boys were playing

The victim and his siblings, ages five and seven, were in the woods when the youngest of the three children found the gun, according to the statement.

Special investigators spoke to the five-year-old and determined he thought it was a toy when he fired it, striking his brother.

The victim was visiting with relatives from Sharpsburg when the incident occurred as the children were playing on a trampoline, reported 11Alive.

Officers had searched an area near where the gun was found two hours earlier on Saturday after a group of suspects fled a traffic stop nearby, police said.

The suspects fled on foot behind some houses and police lost track of them.

A bag of suspected MDMA drugs, commonly known as Ecstasy or Molly, was discovered, but no gun was found at the time.

In their statement Sunday, Griffin police said the shooting was likely a ‘tragic accident’ and officers would now investigate who dumped the loaded weapon in the woods. 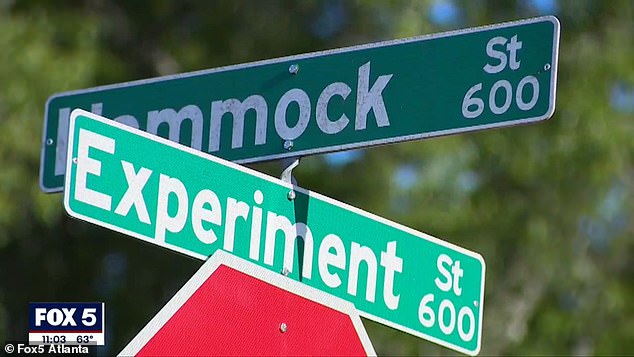 Police had responded to the same area two hours earlier when a group of suspects fled a traffic stop and dumped a bag of drugs in the woods, possibly along with the gun

‘We will diligently pursue and charge any other parties responsible for the actions leading up to the apparent abandonment of this weapon allowing for access by these innocent children,’ officials said.

The gun was sent to the Georgia Bureau of Investigation Crime Lab for touch DNA analysis, authorities added.

‘We will leave no stone unturned as we search for the individuals responsible for the abandonment of this weapon,’ Griffin Police Chief Mike Yates stated.