Boy, 5, will have to avoid scary movies for life due to a rare brain disease

The terrifying delights of Halloween are a nightmare for five-year-old Reed Havlik, who could suffer a life-threatening reaction to scares and frights.

The little boy, from Iowa, has vanishing white matter disease, a rare condition that eats away at his central nervous system, causing him to gradually lose his hearing, vision and motor function.

There is no treatment or cure for the disease, which affects less than 400 people in the world.

All his parents and doctors can do is push for more research and protect him from things that might destabilize him – and that includes horror movies and trick-or-treaters.

Reed Havlik, five, from Iowa, has vanishing white matter disease, a rare condition that eats away at his central nervous system, causing him to lose his hearing, vision and motor function 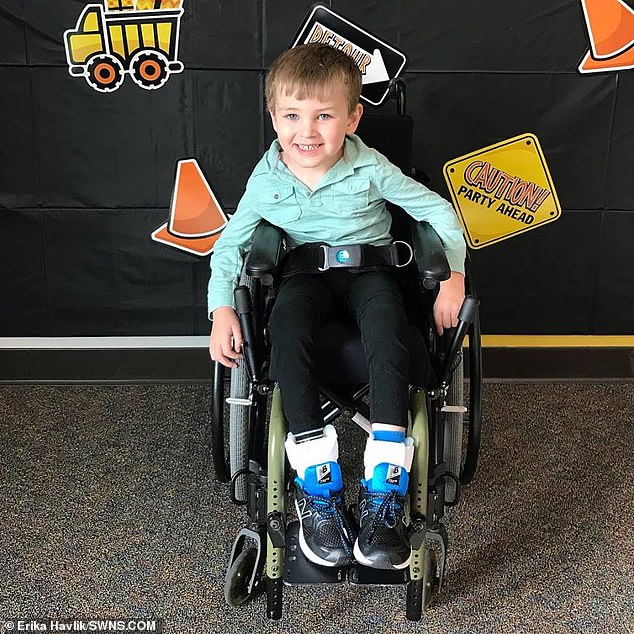 Vanishing white matter is a recessive genetic disorder that occurs mainly in children.

If both parents are carriers, than there is a 25 percent chance for the child to get it.

This causes myelin, or white matter, in the brain to deteriorate.

The disease is normally triggered from physical stress on the body such as a hit to the head.

White matter in the brain is known as myelin.

It protects the electric cables known as axons that transport electrical signals throughout the brain.

Without this protection, the axons are at risk to be damaged.

The brain disease is so rare that there is no known cure.

Doctors can prescribe medication that can help manage some of the symptoms that the person is experiencing.

Physical therapy is also an option for those experiencing muscle spasms or stiffness.

Prominence in the world

There affects an estimated one in 100,000 children across the world.

But there are only 300 to 400 known cases of someone having the disease.

People in the past have been misdiagnosed to have multiple sclerosis when they actually had vanishing white matter disease.

Source: Dr Ali Fatemi, director of the division of neurogenetics at the Moser Center for Leukodystrophies

Reed’s mother Erika, 33, said this means that the family and his teacher have to be particularly careful – especially around Halloween.

A serious scare from a trick-or-treater could cause a stress on his brain that speeds up the progression of the disease or put him in a coma.

Erika said: ‘We have got to be really careful what we expose him to because he could be frightened to death.

‘The stress of it all can speed [the disease] up.

‘We do celebrate Halloween but only on a really small scale. Reed is going to be Mickey Mouse this year.

‘His school throws a party which everyone dresses up for but everyone there is super helpful.

‘They make sure that the costumes aren’t too scary. They really do understand how serious it is for him.’

The body doesn’t produce a substance that insulates the nerves in his body, meaning they deteriorate and disappear, and cells in the brain are particularly vulnerable.

Up until the age of two, Reed was a ‘happy, healthy little boy’ who was full of life and had hit all of the big milestones during childhood.

However, after waking from a nap on November 1, 2014, Erika noticed that Reed was limping and so took him to see his doctor.

Medics initially thought that Reed had a small fracture and put his leg in a cast for two weeks. But when the cast was removed, Reed could barely walk at all.

Over a series of weeks Reed underwent multiple tests with doctors struggling to find an answer for the tot’s troublesome mobility issues.

Erika and Jesse, a technology officer, were finally referred to see specialists at the University of Iowa Children’s Hospital in February 2015.

It was here that an MRI scan revealed the devastating reality of Reed’s rare, terminal illness.

Erika says she had ‘never heard’ of VWM, but as doctors explained the tragic prognosis of how the disease will eat away at her beloved son’s brain she ‘sat there in shock’.

He has now been living with the condition for three years and doctors predict he could tragically die from the disease within three to seven years.

‘We have been told that it will eventually kill him’, said heartbroken mother, Erika, who works in customer service.

VWM eventually leads to organ failure as the white matter in Reed’s brain disappears over time.

This means his brain will be unable to communicate with his body and as the disease progresses, will he will slowly loses the ability to talk, eat and eventually breathe.

Reed has already lost the ability to walk and is confined to a wheelchair.

A stress on the brain, like getting frightened, a serious illness or a bump on the head, can cause the disease’s progression to speed up.

Getting frightened can be so dangerous for Reed that his school has to go to extra measures to make sure the school’s mascot – a hawk – if kept well out of his sight.

The youngster is ‘petrified’ of the huge hawk costume, according to his mother.

Speaking of finding out he had the disease, the mother-of-one, who is married to Jesse, 32, added: ‘It was gut-wrenching. Sickening. 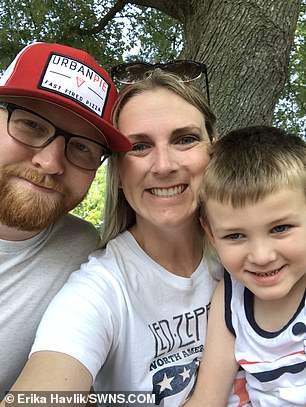 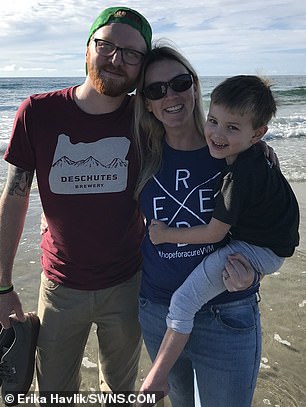 Vanishing white matter is a recessive genetic disorder that occurs mainly in children. Pictured: Reed with his mother Erika and father Jesse 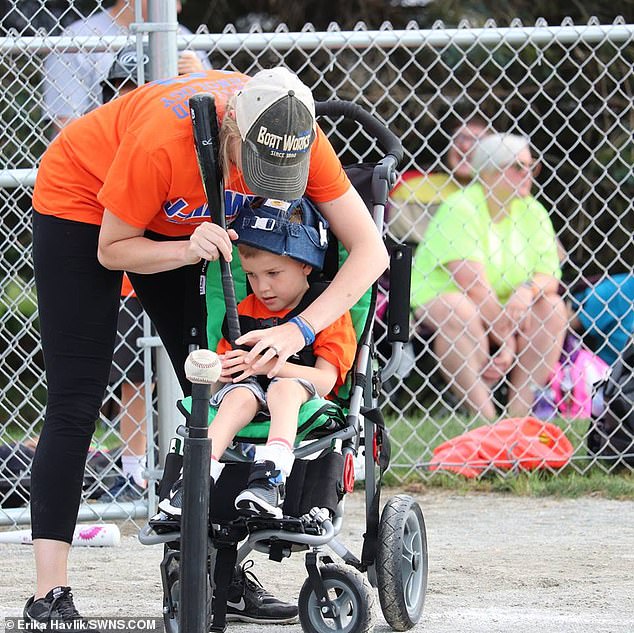 Ever since his diagnosis, Reed’s desperate parents have ‘dedicated’ each day to giving their son the ‘best life we possibly can’

‘We had so many hopes and dreams for him but they all vanished in that moment.

‘It was really hard to take. I almost felt like a zombie. I was just thinking, ‘what do we do now?. There’s nothing we can do to help him.

‘I still haven’t prepared myself for when that day, when he does leave us, comes. I try not to think about it.

‘I do wonder how I will cope. We will have to redefine who we are and I wonder what life will be like without him.

‘I haven’t thought about a funeral. I’ve struggled to come to terms with it.’

Ever since his diagnosis, Reed’s desperate parents have ‘dedicated’ each day to giving their son the ‘best life we possibly can’.

Erika, said: ‘We have been told to try to make the most of our time with Reed. We want to give him the best life we possibly can and enjoy him whilst we can.

‘I have good days and I have bad days. I struggle with jealousy a lot. I wish he could play outside and run around like every other five-year-old. 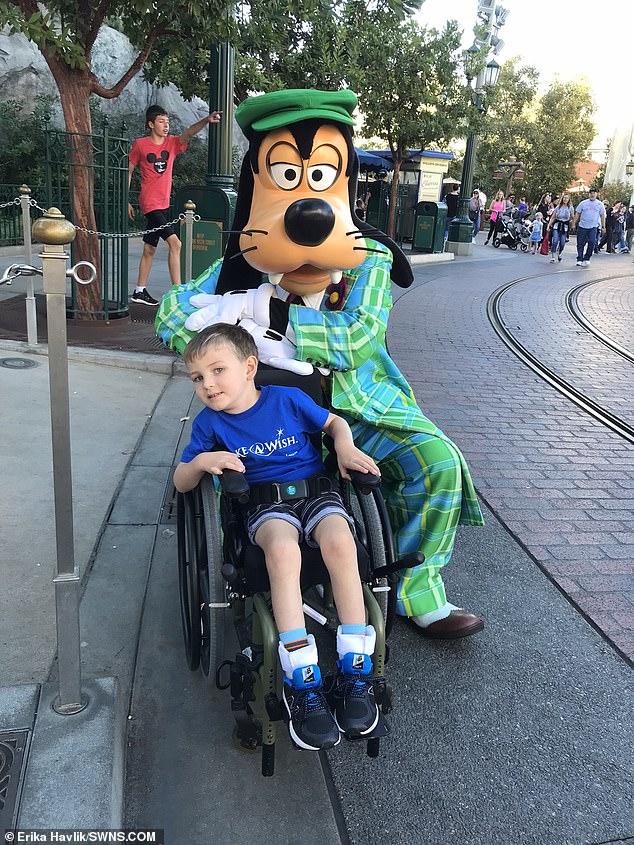 Erika, Jesse and Reed have been lucky enough to experience some ‘special’ trips since Reed’s diagnosis. He has visited Disney World in Florida, and will be visiting for a second time at the start of November

‘We are trying to give him as many opportunities in life and try to soak up every second we have with him.

‘Our world has been altered completely. It’s been life-changing.

‘Everyone has been showering him with as much love as they can to ensure he’s as happy as possible.

‘It almost feels like we won the unlucky lottery. Just because the odds of Reed having this disease are incredibly slim.’

Erika, Jesse and Reed have been lucky enough to experience some ‘special’ trips since Reed’s diagnosis.

He has visited Disney World in Florida, and will be visiting for a second time at the start of November.

Reed has also been able to enjoy a Make A Wish Foundation experience, handed exclusively to children who are seriously or terminally ill. 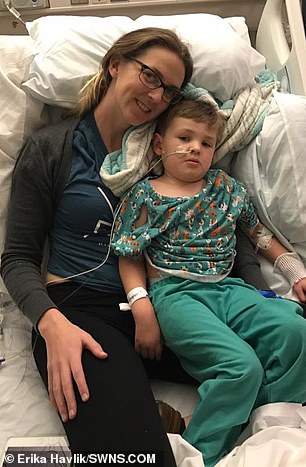 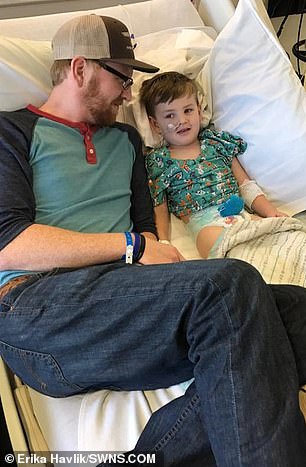 But long car journeys can be stressful for Reed meaning Erika and Jesse have to be incredibly selective when choosing to take Reed away on holiday.

As the months go by Reed will lose the ability to lose use his hands, to talk, swallow, see, hear and eventually his body will shut down completely.

He is often in pain and is sadly already beginning to struggle to talk and write his own name.

Like getting scared, illness can cause Reed’s disease to get worse. Any damage to his head can ‘make the disease worse’.

Last year Reed came down with the flu, and once he recovered Erika says she could notice a ‘decline’ in Reed’s condition.

But Erika and Jesse are holding onto hope that one day a treatment, and maybe even a cure could be found in time to save Reed’s life.

A global research project is currently underway, but a treatment or cure will come at a cost for the 200 families of VWM sufferers.

Speeding up the progress of finding a cure comes at a cost of approximately $2 million, and it’s up to the families themselves to raise the funds to save their children.

For these desperate families it’s a race against time. Reed’s family and friends have managed to raise an incredible $150,000 towards funding research.

Erika, said: ‘Even with a terrible prognosis there is hope. We will continue to fight for Reed and the research, and try to raise as much as we can.

‘The research is underway. We can only hope that before it’s too late there can be a cure found to slow down the progression of the disease.’