Boy, 6, with rare neurological disorder denied experimental medicine that could extend his life

A six-year-old boy has been denied an experimental drug that his parents say could prolong his life.

Timothy Donohue was two when he was diagnosed with Leigh’s syndrome, a rare, inherited neurodegenerative disorder in February 2016.

The disease will eventually rob Timothy, of Jacksonville, Florida, of his speech and mobility and will likely kill him before he’s a teenager.

His parents, Jamie and Terry, say a drug has shown promise in clinical trials and could give him several more years.

But the drug’s manufacturer says all the drug’s available supply has already been issued to patients receiving the treatment and that it’s not issuing any more under compassionate use until it receives FDA approval. 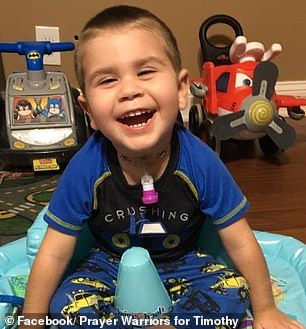 Timothy Donohue, six (left and right), from Jacksonville, Florida, was diagnosed at age two, in February 2016, with Leigh’s syndrome, a rare, inherited neurodegenerative disorder. A genetic defect doesn’t allow mitochondria in cells to convert food to energy and, as a result, cells in the body begin to die 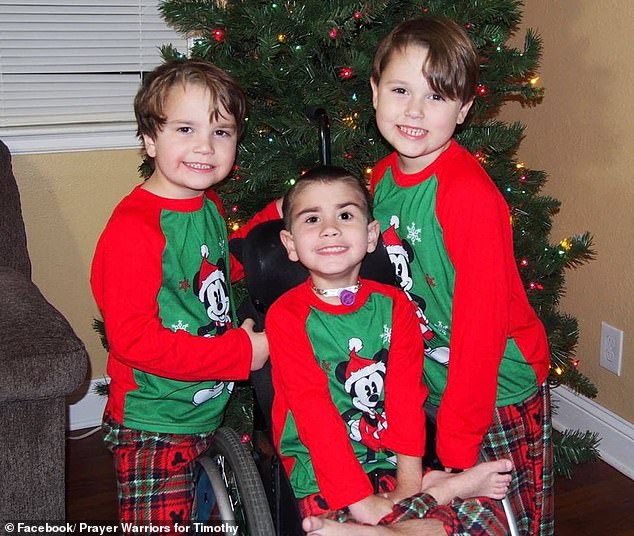 The Donohues became foster parents to Timothy when he was five months old in August 2013 and later adopted him and his two brothers, seven-year-old James and five-year-old Daniel. Pictured, left to right: Daniel, Timothy and James in December 2018

‘As long as Timothy is fighting, we’ll keep fighting for him,’ Timothy’s mother, Jamie, told DailyMail.com.

‘He has a strong will and he’s been fighting for so long. At this point, “No” is not acceptable for us.’

Jamie and Terry first became foster parents for Timothy when he was five months old in August 2013 and later adopted him and his two brothers, seven-year-old James and five-year-old Daniel.

When Timothy was about a year old, his parents noticed that he wasn’t hitting some developmental milestones. He would also have hand tremors and his eyes would bounce back and forth.

‘We knew he had some delays,’ Jamie said. ‘He was born with some drug exposure, so we thought the delays were related to that.’

At 14 months old, he had an MRI done at a local hospital in Jacksonville, and the neurologist ordered a genetic test.

However, the geneticist told Timothy’s parents that he was likely suffering from fetal alcohol syndrome.

At around two-and-a-half, another MRI was performed in Orlando and a second genetic test was ordered.

After several fights with their insurance company, the test was finally approved, which confirmed that Timothy had Leigh’s syndrome. 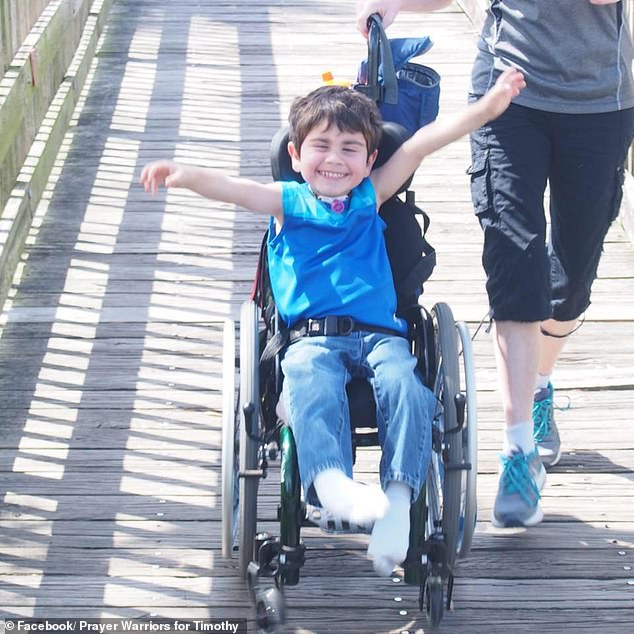 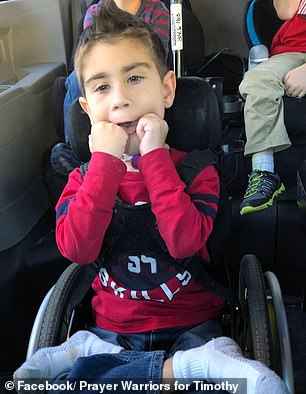 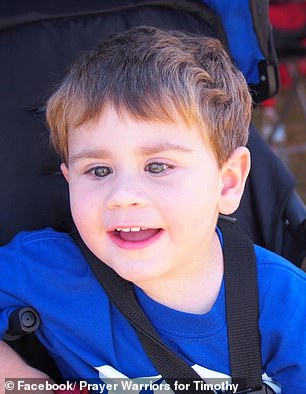 The onset of Leigh syndrome can begin anywhere from three months to two years old and includes a loss of mental and motor skills. Those diagnosed typically don’t live past the age of 10. Pictured, left and right: Timothy

Leigh’s syndrome is a severe neurological disorder caused by a mutation in one of more than 75 genes, according to the Genetics Home Reference.

Genes associated with Leigh’s syndrome are found in the mitochondria, which is known as the ‘powerhouse of the cell’ and is like a battery that provides energy to the cells.

The mitochondria typically converts food to energy but the genetic defect prevents them from doing that and, as a result, cells in the body begin to die.

The onset of the disease can begin anywhere from three months to two years old and includes a loss of motor skills such as head control and poor sucking ability.

Gradually, the nervous system degenerates and children have a progressive loss of mental and movement abilities. Intellectual disability may diminish as well.

The disease affects approximately one in 40,000 children in the US, but those diagnosed typically don’t live past the age of 10.

Many die at birth and a large percentage die by age three due to respiratory problems.

It was this condition that led to the creation of the world’s first three-parent baby, a revolutionary technique that combines the genes of three people.

Dr John Zhang, who led the medical team in New York City, told Daily Mail Online in September 2016 that the mother of the baby carried the genes for the disease in her mitochondria.

She and her husband, from Jordan had lost six children – two as babies and four in miscarriages – to Leigh’s syndrome and visited the doctor’s team at the New Hope Fertility Clinic.

The team fertilized the egg of the woman with the sperm of her husband to create an embryo and did the same to the eggs of a donor.

Scientists extracted the future parents’ DNA and then did the same thing with the fertilized egg from the female donor. All that was left behind in the second egg was the mitochondrial DNA.

Then the DNA of the couple trying to have a baby is transferred to the donor embryo that has the healthy mitochondria. The embryos carrying the DNA of three people are then put into the womb of the woman who wants to get pregnant. 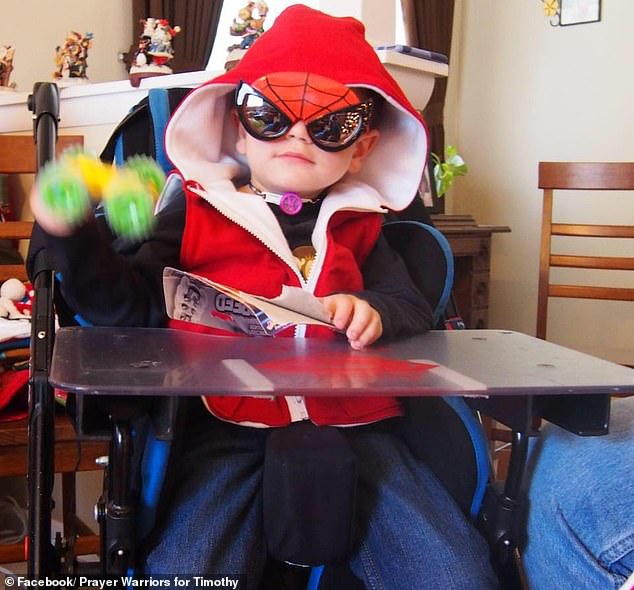 Since this January, Timothy (pictured) has had episodes of going into respiratory distress and his parents have had to call rescue on him three times 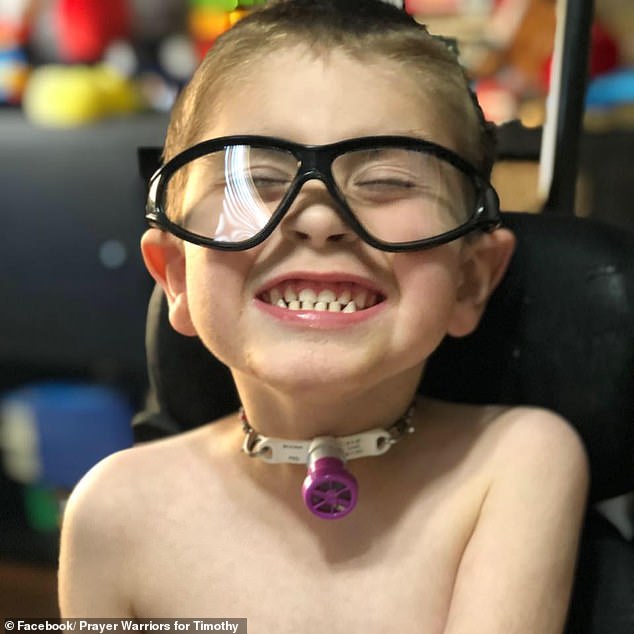 They are hopeful that a drug called EPI-743, which targets an enzyme that helps regulate and improve the cells’ ability to use available energy, could extend Timothy’s life. Pictured: Timothy

Currently, there is no cure for Leigh syndrome and most treatments are meant to control symptoms, according to the United Mitochondrial Disease Foundation.

Treatments mostly involve variations of vitamin and supplement therapies, although there are experimental drugs being tested in some clinical trials.

Because of the lack of a cure, the Donohues have been seeing a specialist in Houston, Texas, who regulates a cocktail of medicines that helps regulate his symptoms.

However, Jamie says the disease has slowly been weakening his body.

‘Starting in January of this year, he started going into respiratory distress and we’ve had to call rescue on him three times,’ she said.

‘His diaphragm muscles are weakening, which doctors say is the disease progressing.’

Currently, Timothy is under hospice care at home. But his parents say there’s hope a drug could extend his life.

EPI-743 targets an enzyme, which helps regulate and improve the cells’ ability to use available energy, according to United Mitochondrial Disease Foundation.

Several clinical trials have shown promise and case studies have reported of patients whose symptoms were lessened, or even reversed.

The drug, which has not yet received approval from the FDA, is manufactured by BioElectron, a private biotechnology company. 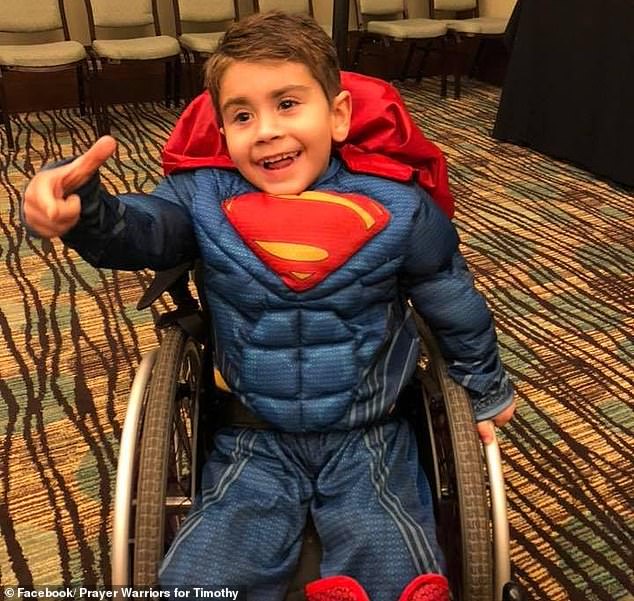 However, the drug manufacturer says it is not allocating the drug for children under compassionate use because it is focusing on clinical trials to get FDA approval. Pictured: Timothy 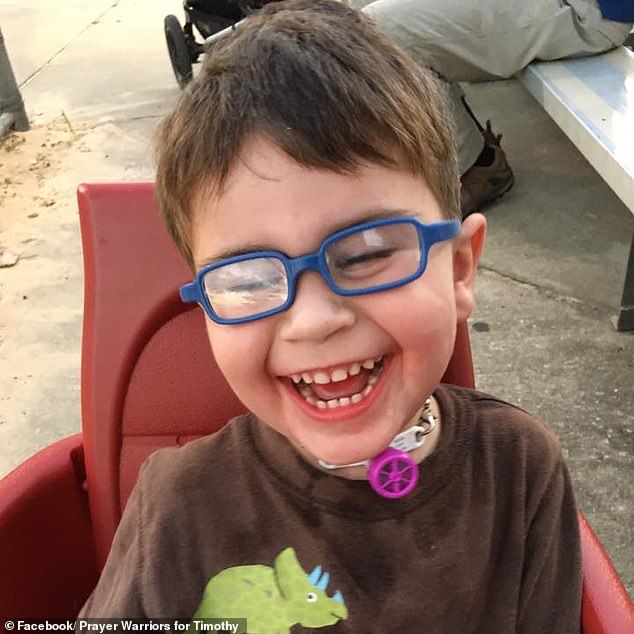 CEO Dr Matthew Klein told First Coast News that BioElectron is no longer allocating the drug for children under compassionate use because it is focusing on clinical trials to get FDA approval.

BioElectron did not immediately return DailyMail.com’s request for comment.

‘I have a hard time believing it’s not possible,’ Jamie said. ‘[The drug is] out there and it could give Timothy a chance.’

Jamie says there is a bill, signed by President Donald Trump into law last year, called the Right to Try Act.

As the law stands, anyone deemed terminally ill has the right to access a drug not approved by FDA and under clinical trial.

However, it is at the discretion of the manufacturer and Dr Klein says all the available supply is only for patients who are currently receiving it, reported First Coast News.

Jamie says that for the past four years, Dr Klein has told her that BioElectron is planning another phase of a drug trial that Timothy could qualify for.

‘However, with clinical trials, travel to a trial site is required and, at this point, Timothy is not healthy enough to travel,’ she said. ‘Therefore, right to try is the best reasonable option for him.’

Jamie says the family has reached out to Florida Senators Marco Rubio and Rick Scott as well as Congressmen Al Lawson and John Rutherford, all of whom have been in touch with the family and are working on their case.

The family is also considering a write-in campaign to help persuade BioElectron to let Timothy try the drug.