Boy, 9, who beat leukemia meets the doctor who saved his life by donating his bone marrow

A nine-year-old boy was finally able to meet the man who saved his life with a bone marrow transplant.

Johnny Sawyer Dyer, of Corryton, Tennessee, was diagnosed with leukemia in January 2017.

After undergoing several rounds of chemotherapy and full body radiation, doctors performed a bone marrow transplant that sent his cancer into remission.

In the video, the two are seen embracing within seconds as Schwartzel tells Sawyer’s parents, Ron and Misty: ‘I feel like we’re so connected, but we’ve never met.’ 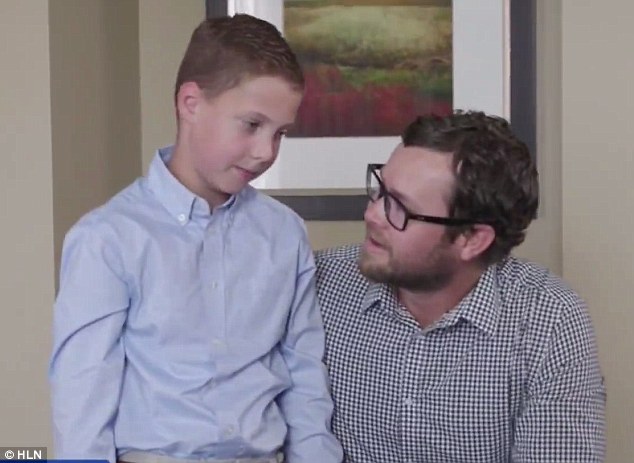 Sawyer was diagnosed with acute myeloid leukemia, which occurs when bone marrow cells don’t mature as they’re meant to. Pictured: Sawyer and Schwartzel on Saturday

Kevin Schwartzel, an ER physician’s assistant from CA, registered for Be The Match in 2011. Six years later, he received a phone call alerting him that he had a match and happily donated his bone marrow. His donation became a life-saving transplant that would change 8 year old Sawyer Dyer’s life forever. On May 23, 2017 Sawyer received his bone marrow transplant at the Sarah Cannon Center for Blood Cancer TriStar Centennial Medical Center under the care of Dr. Haydar Frangoul. Before their birthdays this October, Sarah Cannon brought Sawyer and Kevin together for the first time in a surprise meeting before the American Society For Blood and Marrow Transplantation CEC Meeting in Nashville. Watch their powerful reunion moment featured on Headline News earlier today, as well as an interview with Kevin about the process of becoming a donor! #ChildCancerAwarenessMonth #BloodCancerAwarenessMonth #FightingCancerTogether

Sawyer was diagnosed with acute myeloid leukemia (AML) when he was in first grade.

AML starts in the bone marrow, the spongy tissue inside bones where blood cells are made.

The term ‘acute’ means it can spread quickly to the blood and other body parts including the liver, lymph nodes and central nervous system.

Signs and symptoms often mimic those of infectious diseases such as the flu and can include fever, fatigue, bone pain and easy bruising.

AML is one of the most common types of leukemia in adults but it can also occur in children.

However, the American Cancer Society states it’s still rare overall and only accounts for about one percent of all cancers. 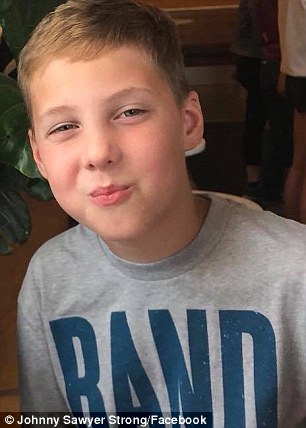 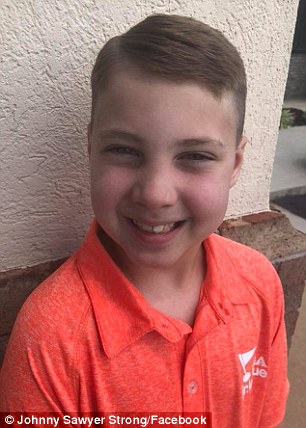 Sawyer (left and right) had to undergo four rounds of chemotherapy and full body radiation at East Tennessee Children’s Hospital in Knoxville. After that was completed, doctors suggested he have a bone marrow transplant 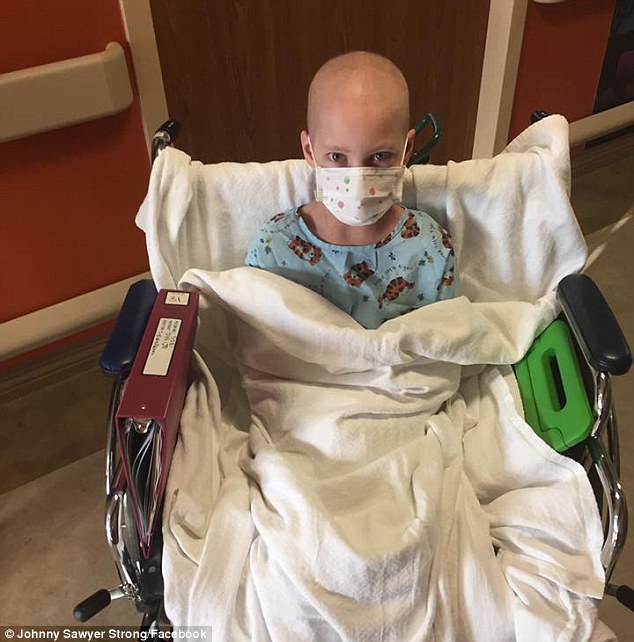 The operation occurred in May 2017 at the Sarah Cannon Center for Blood Cancer in Nashville, but Sawyer (pictured) wasn’t able to meet the donor at the time

Sawyer had to undergo four rounds of chemotherapy and full body radiation at East Tennessee Children’s Hospital in Knoxville.

After that was completed, doctors suggested he have a bone marrow transplant.

According to the Fred Hutchinson Cancer Research Center, 70 percent of patients in need of a marrow transplant do not have a matching donor in their family.

Around 7,500 Americans are actively searching the national registry for an unrelated donor but only two percent of the population is on the list.

Only around one in 300 will be selected as the best possible donor for a patient in need.

The operation occurred in May 2017 at the Sarah Cannon Center for Blood Cancer in Nashville, but Sawyer wasn’t able to meet the donor at the time.

‘This wasn’t fun,’ Sawyer told the Sarah Cannon Center in an interview about his cancer treatments.

‘It would really feel good to meet the person who saved my life.’

On September 22, his wish was granted when he met Schwartzel from San Diego, California.

‘We were so thankful for him doing this for Sawyer,’ Sawyer’s mother, Misty, told Good Morning America.

‘Sometimes “thank you” doesn’t seem like enough to say to someone who has saved your son’s life.’ 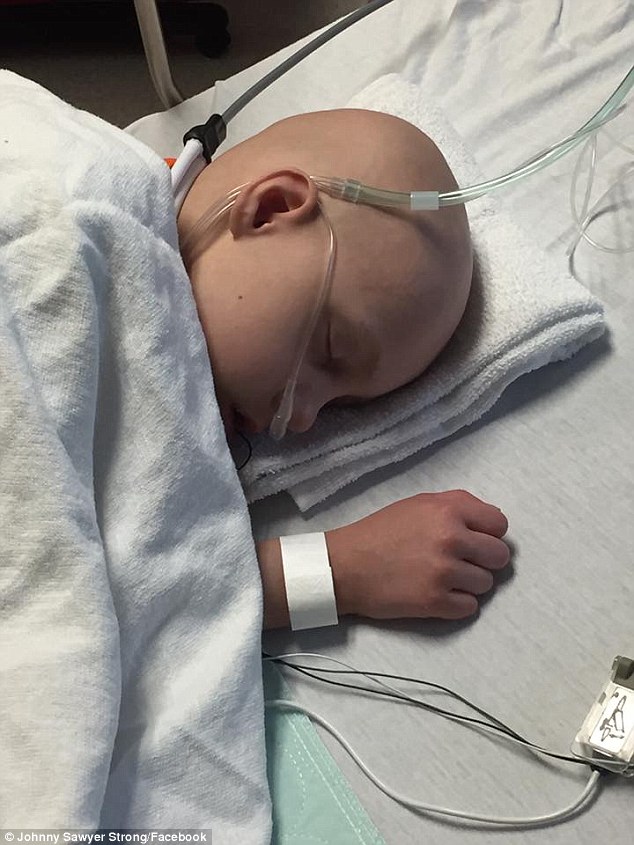 On September 22, Sawyer’s wish to meet his donor was granted when he met Schwartzel. Pictured: Sawyer 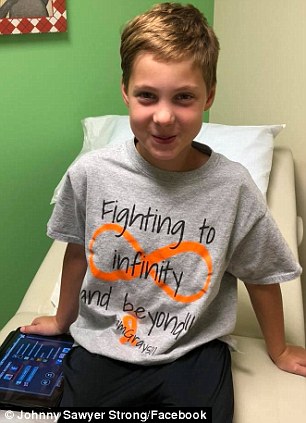 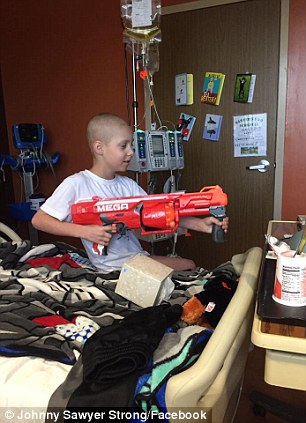 Schwartzel, a physician’s assistant, said he signed up to be a donor in 2011 but wasn’t called to be a match until 2017. He said he felt grateful that he was able to meet Sawyer (left and right)

Schwartzel, a physician’s assistant, signed up with the Be the Match registry in 2011 but didn’t get a call asking to donate until 2017 when Sawyer was eight years old.

The Dyers released their contact information through the registry. Schwartzel reached out to them and they arranged a meeting at the Sarah Cannon Center.

The video shows the two of them hugging as soon as they meet.

‘It’s nice to finally meet you,’ Schwartzel says, kneeling down beside Sawyer.

‘Nice to finally meet you too,’ Sawyer replies.

In an interview with HLN, Schwartzel said he felt grateful that he was able to meet the family.

‘It was unbelievable that we had the opportunity to meet so soon,’ Schwartzel said.

‘I heard a lot of recipients don’t ever get to meet their donors so the fact that we got to meet under those circumstances was pretty epic.’

He added that while he saves lives for a living, this is the first time he’s done so outside of working hours.

‘For me, it’s still settling in. But working in healthcare myself as a physician’s assistant and paramedic, I’ve been trained to save lives,’ he said.

‘But never has it hit me this hard where I actually felt like I wasn’t being paid to do it, I wasn’t on the clock.

‘This was something completely organic, completely intrinsically satisfying, just on a completely different level emotionally.’