Boy buys his first home aged just eight after successfully bidding on the $970.000 home in Sydney

Boy, aged just 8, becomes one of Australia’s youngest property investors as he purchases his first home for $970,000

An eight-year-old boy has bought his first home after outbidding other shoppers at a Sydney auction.

Michael Hamdan, from the city’s south west, snapped up a cluster of five one-bedroom studios in Greenacre on Saturday for $970,000.

The youth could now be Sydney’s youngest property investment owner after purchasing the Juno Parade homes- which had a market expectation of $800,000.

Selling agent Mark Saleh, of Harcourts, said the six other registered bidders were shocked by the youngster’s entry into the auction.

Michael Hamdan, eight, became the proud owner of a cluster of five one-bedroom studios in Greenacre on Saturday. He is pictured outside the Juno Parade property with selling agent Mark Saleh

‘I’ve never seen anything like it. All the other bidders were a bit shocked,’ he told Realestate.com.au.

The boy employed a strategy to ‘slow bidding down’, that he was taught by his property developer father.

Due to his age, Mr Hamdan was not able to purchase them directly, but his father said they were bought for him.

The father said he wanted his son to be involved with the purchase so he could learn about Sydney’s property market.

‘I used to get very uncomfortable bidding at auctions, I know what it’s like. I hope this will build up his confidence,’ the dad said.

‘[Michael] will be involved every step of the way … he will make the choices.’ 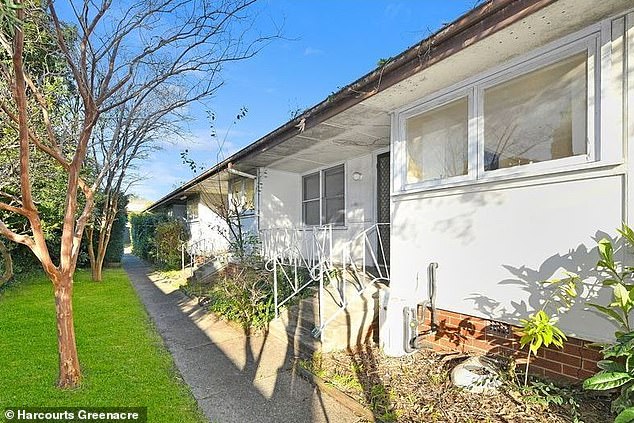 The father-son team will renovate the former housing commission properties then rent them out, with the younger Hamden leading the decisions on fittings and fixtures.

The father said he was having fun monopolising the bids and enjoyed taking part in the sale.

The majority of the auction was led by the young property owner, who made the first bid.

To seal the deal, the boy passed the cheque to the sellers.

The average age of Sydney first home buyers is 38, according to research by ING.