An 11-year-old boy has shaved off his long blonde locks during a school assembly to raise funds for a cancer charity after his baby sister died from leukaemia five years ago.

Jesse Pannenburg, 11, of Adelaide, raised $7,266 for the Childhood Cancer Association – an organisation that helped his family when his baby sister became ill.

His kind act, not only supported the organisation, but also paid tribute to his sister Holly who would have started at Edwardstown Primary School, alongside her brothers Jesse and Max, this year.

The moment where the boy had his hair cut, then shaved was clearly a heartfelt one – Jesse could be seen crying in remembrance of his sister – but it was revealed that his hair would be donated and used to make a wig. 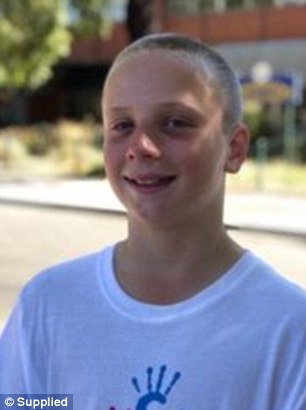 The 11-year-old after his hair cut which help raise more than $7,266 for the Childhood Cancer Association

Speaking to CoastCity Weekly Messenger, the generous youngster said: ‘Every time I went to school assembly I was looking at the class that would have had her and I could picture Holly there.’

Sadly, Holly Pannenburg died after a seven-month battle with the illness, just a few weeks before she was due to turn one.

Jesse, who has been raising funds through a web page, revealed how he was seven-years-old at the time his sister was diagnosed with the illness.

‘Holly stayed in the Women’s and Children’s Hospital with Mum. She got very, very sick from the chemotherapy and her hair fell out,’ he wrote on the site.

‘Dad took my brother Max and I into the hospital every day to visit. We met other great kids with cancer too, all of them lost their hair. 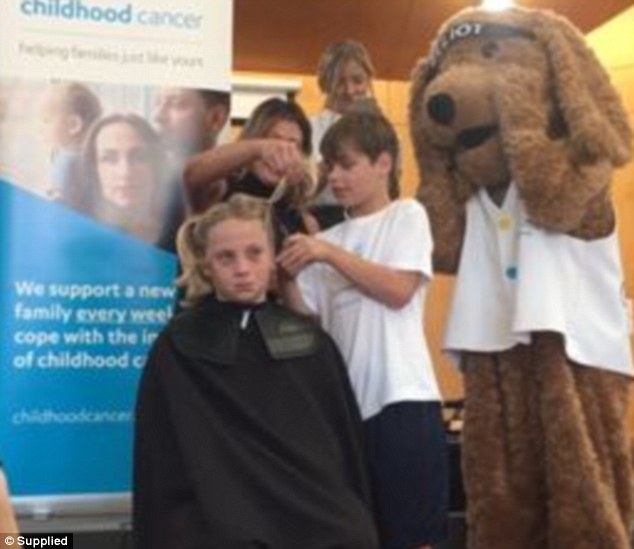 The moment where Jesse had his hair cut, then shaved was clearly a heartfelt one but it was revealed his hair would be donated to make a wig

‘The Childhood Cancer Association helped Holly and our family while she was sick and they still support us.’

Jesse Pannenburg’s mother, Alice, said she has been overwhelmed by the support of the school, which is also planning on naming a new playground after her daughter.

‘I was just so touched to have a little piece of Holly where the boys are every day,’ she told the publication.