Boy forced to sleep on wheelchairs in Basingstoke hospital

A 12-year-old boy who was seriously ill was forced to sleep on two wheelchairs pushed together for seven hours because there were no hospital beds available.

Lorraine Filmer Ne Toakley posted a picture of her sickly grandson Shaun fast asleep on the makeshift bed in Basingstoke Hospital on Saturday.

The youngster’s condition was classed as serious because he had a high amount of bacteria in his blood and doctors were concerned it could be the start of meningitis.

Shaun, 12, was forced to sleep on two wheelchairs pushed together at Basingstoke Hospital on Saturday

He was admitted at 10am and spent the first two hours or so sitting on the floor, before staff cobbled together two wheelchairs.

The boy spent seven hours on the makeshift bed before getting a CT scan at 4pm, which his grandmother said was a scarily long time if he actually had meningitis.

After seven hours on the chairs Shaun was given a bed.

Ms Filmer Ne Toakley’s daughter in-law was outraged by the situation and had taken a picture from the scene and sent it to her.

In her post on Facebook, Ms Filmer Ne Toakley said: ‘Just received this picture from my daughter in law of my poor grandson, very ill and waiting for a bed in Basingstoke Hospital.

‘Meanwhile four hours spent not even on a trolley as none available.

‘Staff been great, he was classed as serious as high amount of bacteria in blood and they are concerned that it’s the start of or could of become meningitis.

‘He’s been there since 10am and spent the first two hours or so on the floor.’ 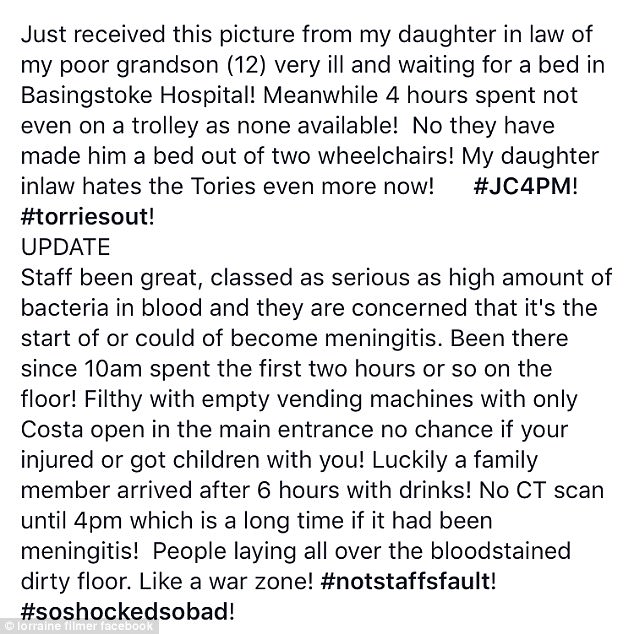 Shaun’s grandmother Lorraine Filmer Ne Toakley posted the story to Facebook, detailing how her 12-year-old grandson slept on the floor for two hours before being given a makeshift bed – despite being suspected of having meningitis

The young boy was forced to go six hours without any food or water too, as all the vending machines were empty.

Ms Filmer Ne Toakley said: ‘Filthy with empty vending machines with only Costa open in the main entrance no chance if your injured or got children with you.

‘Luckily a family member arrived after 6 hours with drinks.

‘She [my daughter in-law] is concerned about people with no spare money for Costa and those to poorly or alone etc not being able to have a drink or bite in a very long time.

‘No CT scan until 4pm which is a long time if it had been meningitis.

‘People laying all over the bloodstained dirty floor. Like a war zone.’

‘He was classed as serious so God knows how long people with broken arms or needing stitches are waiting.

‘One nurse was on a 12 hour shift and hadn’t had time for a break at all.’

After his seven-hour stint on the makeshift bed, Shaun was put on antibiotics.

She added: ‘It’s hard to believe a very ill child of 12 is left on a bed made from two wheelchairs for seven hours.’